Burr Brings Art into the UNM School of Law

Sherri Burr is not just a regents professor who teaches entertainment law, she's an art aficionado who sees the value of bringing art into the UNM School of Law. Burr, who chair's the school's art committee, decided to institute a rotating art gallery.

"We inaugurated the gallery with a staff show. Current and former staff were invited to participate. The committee juried the show and three artists were selected to participate. Eleven pieces were selected for the show," she said. The artists are Robert Flinkman, from the Law Library; Dan Noyes, retired from the School of Law administration; and Nick Humphries, also from the Law Library.

Flinkman provided black and white sketches, while Humphries work is in purple prints. Noyes, known as "Dan the Video Man" in the school, featured his spiritual side through Buddha prints he created.

"Just like in a regular gallery, the pieces are for sale. We put a red dot on the tags of those that have been sold. They remain a part of the exhibition until the show comes down. Also like a regular gallery, 75 percent of the purchase cost goes to the artist. The remaining 25 percent reverts to the Law School to support future shows," Burr said. Because the building's walls are concrete, it is a difficult and expensive undertaking to hang the pieces, she said.

Burr drew upon her gallery experts to do the exhibition right. "I take my art law class to galleries in Santa Fe. Nat Owings, of The Owings Gallery, was very helpful. He helped us make lighting adjustments," she said.

And as a good art attorney, Burr drew up the contracts casebook and sent it to UNM legal to make sure everything was done correctly.

The next group of artists to be featured will be students, Burr said. "We sent out a call for student artists, including those from the College of Fine Arts," she said. A call for faculty artists will go out over the summer, and finally, alumni and friends of the law school will be asked toward year's end.

"Tony Hillerman's daughter Anne is an alumna of the school. She's a writer who has been carrying forward her father's characters in her own writing. I bring her into my intellectual property law classes to speak. Her husband is a photographer. His work focuses on places of inspiration. They will be involved in the alumni and friends show," she said.

Burr dabbles in art a bit herself. Not only is she a gifted writer, but she likes to paint and do photography.

Aside from the intrinsic value of having art in the School of Law, Burr said there's another important reason to have it. "An art enriched environment is conducive to learning," she said. 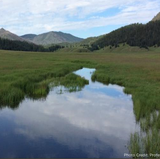 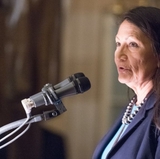