Pulitzer Prize–winning American journalist Ernie Pyle was best known for his poignant stories on soldiers at the frontline during World War II. He captivated readers across the U.S. with a weekly column that ran in more than 300 newspapers. When this accomplished writer wasn’t traveling with his stories, he was at home, in Albuquerque. To honor Pyle’s award-winning journalism, generous donors related to the writer have come forward to establish a scholarship for students in The University of New Mexico’s Communication and Journalism Department.

“Mona and I are both alumni of the University and she is Ernie Pyle’s first cousin, so we are trying to keep his name and his legacy in the public eye,” said Linn Benson. “We’re longtime supporters of UNM and hope this scholarship gives students the money they need to go to college.”

The Bensons are members of the Ernie Pyle Legacy Foundation, a non-profit set up to honor the legacy of Pyle who moved to Albuquerque in 1940.

Pyle wrote in a conversational, down-home style about the soldiers, places and events of the war for the Scripps Howard newspaper chain. His stories reached millions of readers who came to regard him as friend, confidant and teller of truth. His columns, which Pyle believed never adequately conveyed the horror of war to his readers, won him a Pulitzer Prize in 1944.

Pyle was killed by a Japanese sniper while covering the invasion of Okinawa on April 18, 1945.

Two years after his death, his house on the 900 block of Girard Blvd. SE in Albuquerque was turned into a small library. It still displays photos of Pyle, letters and one of his typewriters. 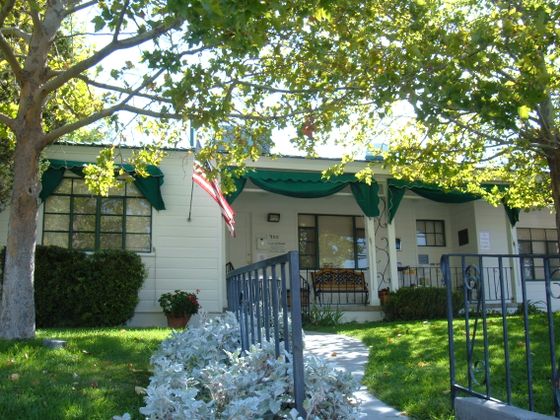 This was the home of war-correspondent Ernie Pyle. It is now a branch library of the Albuquerque/Bernalillo County Library System.

The Ernie Pyle Legacy Foundation is lobbying for a national Ernie Pyle Day. Foundation members plan to kick-off that effort with an ‪Aug. 3, 2017 celebration at the New Mexico Veterans’ Memorial, about two-and-a-half miles east of the Ernie Pyle Library.

“The Ernie Pyle Foundation was formed about three years ago by family members of Pyle,” said Maschino. “He told stories about people, coined after his death as human interest stories and we want to honor and preserve that legacy and hope students, especially Veterans, apply for the scholarship.”

The $1,000 scholarship will be awarded to a UNM journalism major who writes the most intriguing essay about Pyle.

“We are grateful for this new fund to help an aspiring journalism student afford college," said Mike Marcotte, a UNM journalism professor who helped launch the Pyle scholarship. "I think it’s just wonderful that in the process, our journalism program can serve as a living legacy to the great Ernie Pyle."

The scholarship’s initial recipient will likely be announced next fall.