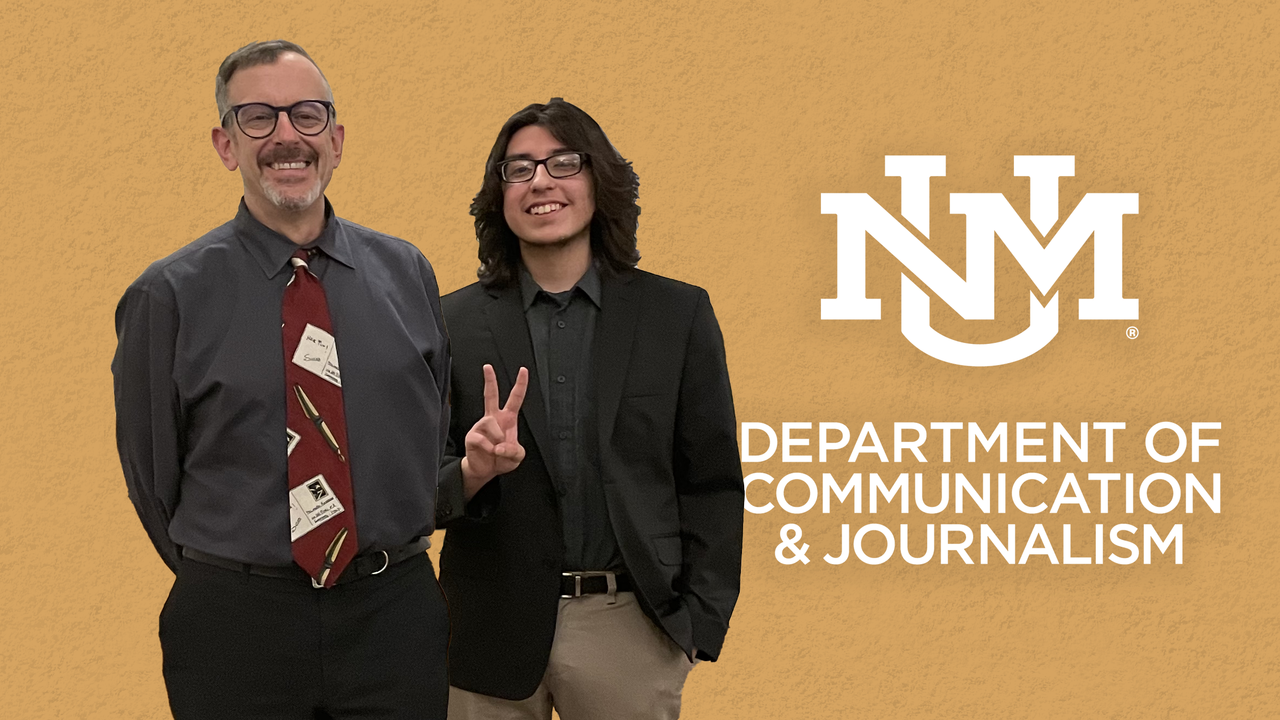 David Weiss, the chair of the Communication and Journalism Department at The University of New Mexico, and his student, undergraduate Andrew Schumann, are currently researching foreign criticism of U.S. presidents. In particular, they are looking at foreign media’s criticism of the Trump administration in 2020 and the U.S. handling the COVID-19 crisis. With this research, the pair are using a framework of several existing academic theories and standards for journalists and exploring ways these standards may be challenged by recent journalistic criticism.

“Our data shows that the criticisms of Trump in the Big Three countries’ (France, Britain and Germany) news pages, especially in and since 2020, were not primarily ideological. That is, the overtly liberal/leftist Euro newspapers didn’t criticize Trump because of his conservative political stance,” Weiss explained. “Rather, they criticized his character flaws, his inability to lead, his mismanagement of the crisis—and they did so in often highly personal terms. We also saw such criticisms in Euro papers that fall more on the conservative side of the ideological spectrum; these criticisms were published despite the papers’ conservative ideologies. So, we believe that several new things are happening in how they write about the U.S. president, even in papers that wear their political orientations on their sleeves.”

“There’s no question that it’s okay to criticize the American president in the United States. What we want to know is: how can what we’re seeing here be explained by existing theories, or be used to develop new ones?” –David Weiss, chair of the UNM Communication and Journalism Department.

UNM undergraduate student Andrew Schumann is pursuing a dual degree in History and Political Science with the UNM Honors Program. He plans to become a policy advisor at the state or federal level.

Weiss and Schumann’s larger research project is on foreign press coverage of U.S. politics before, during, and after 2020. While most U.S. presidents have had issues with the press in the past, Donald Trump directly stated his concerns, often in witheringly critical terms. On many occasions, Trump referred to free press as “fake news” and “the enemy of the people.”

Those statements mirror ones made by previous autocrats/dictators in other nations, such as Hungary, Poland, Russia, and Brazil. These countries, and others, have governments that suppress media criticism of political leaders through retributive action.

“In such countries, journalists have been losing the ability or right to criticize their leaders in print, have been jailed, have been threatened, have been surveilled, etc.,” Weiss explained. “Hearing those same words come out of the mouth of a democratically-elected leader of the United States is horrifying to American journalists and to many American citizens.”

Weiss says that is why it is important to look critically at how other countries are covering U.S. politics, and how that criticism is developing. The Big Three countries of Western Europe have criticized Trump’s policies, character, and physical appearance. Weiss and Schumann suspect this behavior may be a result of their fear of losing press freedom, like some of the Eastern European countries.

“The grand American experiment that we call democracy is increasingly coming under threat,” Weiss stated. “What would the U.S. press look like under a second Trump Administration? This is an issue that American journalists—and I suspect, journalists in our allied nations, in Europe and elsewhere around the world—are already worrying about.”

There are additional layers to this research and its implications for journalists, too. While U.S. press operates under certain ethical guidelines, and claims nonbiased outlooks, Western European papers do not have the same standard of achieving objectivity and are more up front about their biases and political affiliations. In a recent Albuquerque Journal op-ed titled “Should foreign press criticize our media?” Weiss recalls the time he spent in Prague on sabbatical in the spring of 2020. That was when he started noticing that foreign coverage of U.S. politics was much more frequent and personal than he’d previously seen. Weiss particularly noticed a trend in European news outlets as they covered U.S. handling of the COVID-19 crisis and Donald Trump.

“It became very common for foreign press to report on U.S. internal issues, in addition to reporting on the global nature of the pandemic,” Weiss explained.

After noticing this new trend in European media, Weiss and Schumann dug deeper. How had European press outlets covered U.S. leaders before the pandemic? How had the U.S. press criticized foreign leaders and/or policies in the past? What can academics learn by analyzing these patterns of media attention?

Weiss and Schuman addressed these various questions in a recent presentation, hosted by the Albuquerque International Association, titled, “Is It OK to Criticize the American President?” They’ve found that while European and U.S. journalists did criticize each other’s leaders before, over time the criticism has become more personal. Weiss and Schumann analyzed how Trump was covered before he was elected, before the pandemic, and during.

Before Trump’s election, many European news outlets demonstrated anxiety concerning his possible presidency. Similarly, during his first three years in office, Trump was criticized for his personal characteristics, disregard for truth, and physical appearance. During 2020 criticism of Trump got increased in intensity as countless European news outlets criticized Trump’s handling of the pandemic, his “stupid rambling remarks” (in the words of one such outlet), and his reaction to the virus.

“…this is outright criticism. Without a doubt, the gloves are off,” Schumann stated.

Weiss and Schumann are still in the research stage of this project. They hope to soon be able to present their findings at academic conferences and publish their work in one or more academic journals.

“There’s no question that it’s okay to criticize the American president in the United States,” Weiss explained. “What we want to know is: how can what we’re seeing here be explained by existing theories, or be used to develop new ones?”

The theories that Weiss and Schumann are focusing on are particularly normative theories.

“Normative theories are guidelines for what should be the case in an ideal world. They’re often based on moral or ethical standards,” Weiss states. “Are we seeing violations of norms?”