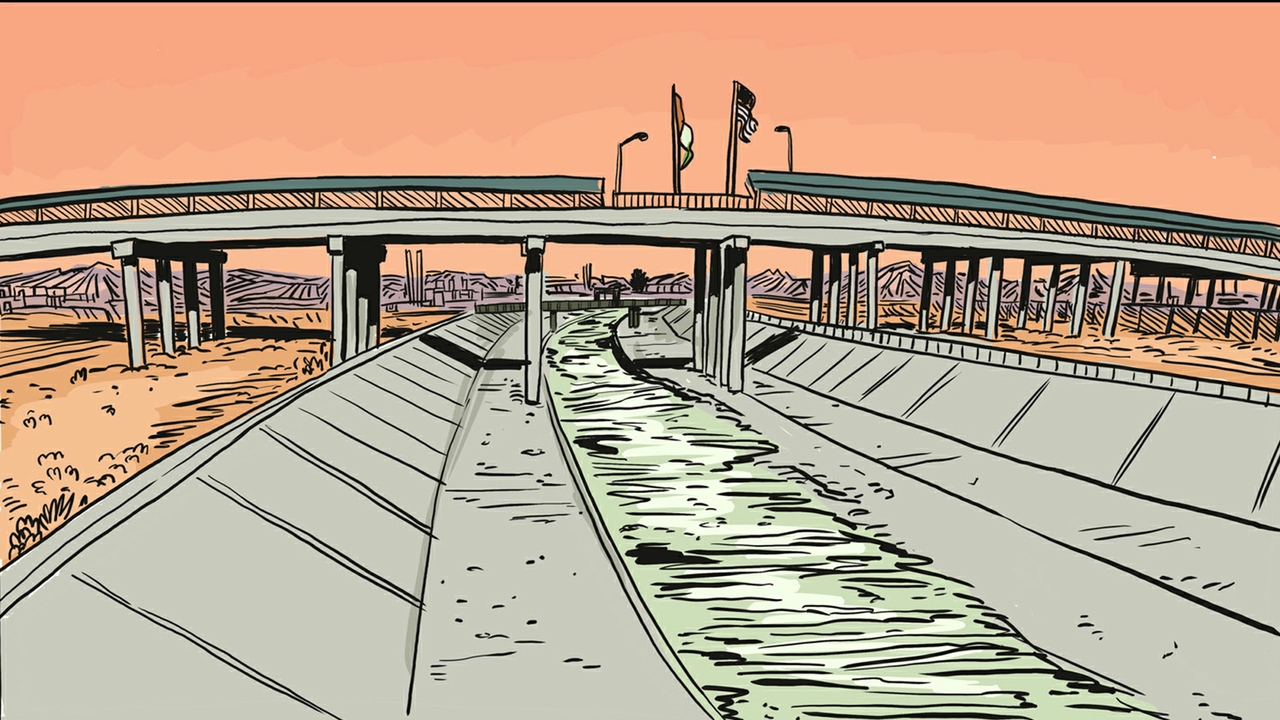 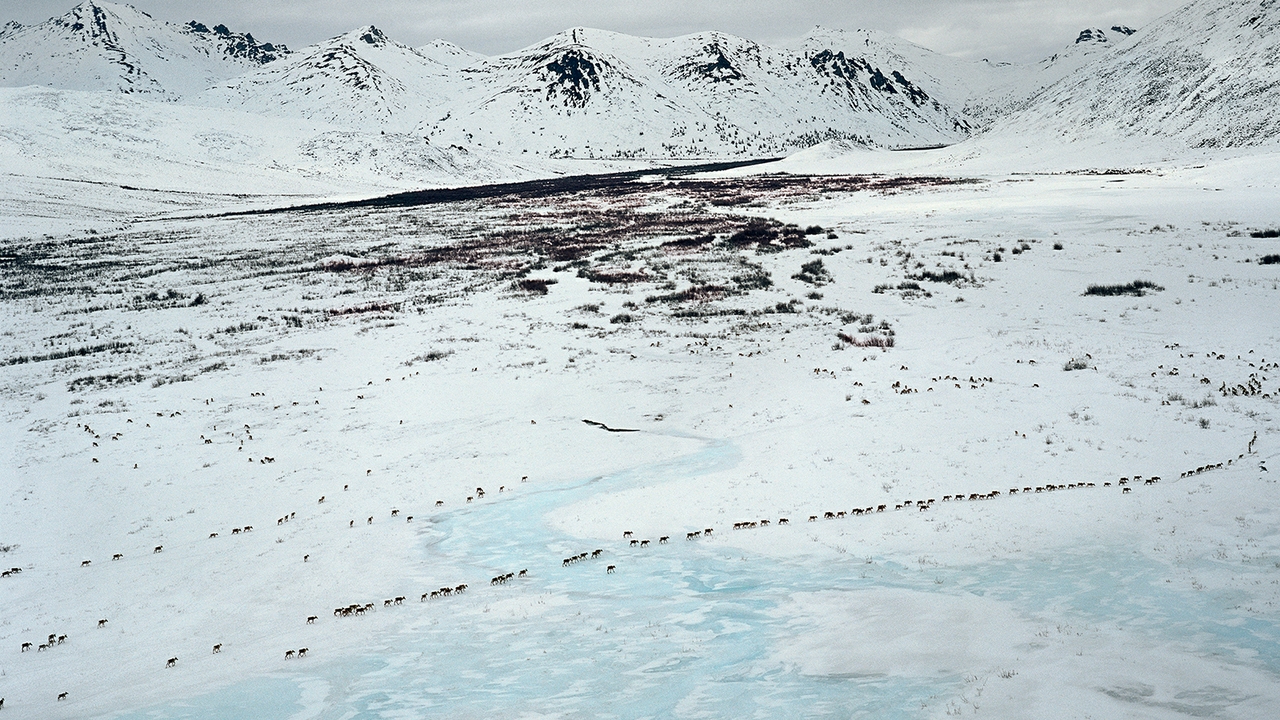 In his website biography, Subhankar Banerjee, professor of Art & Ecology at The University of New Mexico, describes an experience on a trip to the Arctic in 2000 that showed him how the Earth was in crisis.

“In one early morning, I was standing on the deck of a tundra buggy near the town of Churchill in Manitoba, Canada. A tundra buggy is essentially a big bus with large tires that provides high clearance from which tourists can safely view polar bears. I had hoped to see dancing polar bears similar to the ones I had seen in coffee-table books. But instead, before me was an unusual scene that I will never forget: one polar bear was eating another. I made a photograph… That morning I did not understand what I was looking at and was unaware of the science behind the scene. But I know now that the ghastly photograph could serve as visual evidence of both climate crisis and the biodiversity crisis. It is a more authentic marker of our time than dancing polar bears of the past century…” he related in his biography.

Influenced by the experience, he stayed 14 months in the Arctic, exploring the wilderness and taking photographs. He wrote a book about his experiences and in 2003 his photos were exhibited on the floor of the U.S. Senate during a debate about a legislative attempt to open up the Coastal Plain of the Arctic Refuge to oil and gas exploration and development.

Now a professor of Arts & Ecology in the UNM College of Fine Arts, last year Banerjee founded the Center for Environmental Arts and Humanities and the Species in Peril project. He also serves as the Center’s director.

However, due to the pandemic, the Center was unable to do much last year.

The Center for Environmental Arts and Humanities supports curricular, creative and research programming of the Art & Ecology area and the Land Arts of the American West program, he noted. The Center also aims to foster conversations and collaborations among faculty and students from across the university whose work engages with environmental and social justice themes. And it aspires to build bridges between the university and the communities in which we live and work.

In addition to Banerjee, the Center’s core leadership team is composed of faculty members of the Art & Ecology area: professors Szu-Han Ho, Catherine Page Harris, Jeanette Hart-Mann, and research lecturer Ryan Henel. A more expanded team of core and affiliated faculty drawn from across the UNM is expected to be announced later in 2021.

The Center finally recently launched its website and is hosting new events. The series started with a presentation and discussion with storyteller and cartoonist Zeke Peña. The video is now available on YouTube. Peña also presented a lecture to the Intro to Art & Ecology class comprising 17 undergraduates coming from departments throughout UNM.

The next presentation is by celebrated Mexican artist Minerva Cuevas on Thursday, April 15, at 6 p.m.  The event is free and open to all. Join the presentation via Zoom. Cuevas is a conceptual artist, based in Mexico City, whose research-based creative practice spans film, performance, installation, mural painting, and technology.

Banerjee explained why he founded the Center for Environmental Arts and Humanities and Species in Peril.

“First, it’s a recognition that the biodiversity crisis and the climate crisis are the two most consequential and existential planetary challenges of human history,” Banerjee observed. “Both are caused by human activity and are intensifying. While the Species in Peril project is focused entirely on addressing the biodiversity crisis that continues to fester from public inattention, the Center’s activities will address both crises through student and faculty engagements, including teaching, research and creative production.”

In addition, he said, “There is a recognition that through the course of the 20th century, academia has become, what I like to call, ‘silos’ and ‘archipelagoes.’ Each discipline / department / college functions as a silo, while within each unit, it looks like a collection of archipelagos. Individual excellence, not collective efforts, is rewarded in academia that perpetuates the continuation of damaging divisions. We wanted to build bridges across these academic fragmentations, and also between academia and the communities in which we live and work.”

Banerjee defines Art and Ecology as a research-based creative practice. The work faculty and students are engaged in is place-based and community-engaged. For example, he said, the Land Arts of the American West program is place-based and community-engaged eco-pedagogy that is bio-regional and engages with, among other themes, food and water justice, environmental justice, and Indigenous rights issues faced by Indigenous, Latinx and other residents of New Mexico.

“The diversity of landscapes, the diversity of cultures, and the ecological vitality of New Mexico, above all else, serve as the key source of inspiration for our faculty and students,” he remarked.

He pointed to two alumni who have made important contributions to positive environmental transformations: Diné artist Eric-Paul Riege, who received a BFA, and Kaitlin Bryson who received an MFA.

The Center has had its challenges because of the pandemic, with faculty unsure about conduction all-virtual classes and students struggling with the new online format.

“And yet, last Fall, the two classes  ̶  Introduction to Art & Ecology and Species, Space, and the Politics of Survival  ̶  that I taught had full registration and became deeply engaging and meaningful for the students and me,” Banerjee said, citing the work of two students, Eleonora Edreva and Alek de Dóchas. “Their art, their statements, speak for itself. If there is one thing that has given me hope in the midst of an otherwise dark time during this no-end-in-sight pandemic, it is the creative and scholarly work of our students.

Graduate assistant Edreva’s experience in the Art & Ecology program started before the school year officially began, when she was invited by Banerjee to participate in re-imagining the syllabus for the undergraduate Introduction to Art & Ecology course.

“Being invited into this process helped me feel a sense of welcomeness and orientation into the program in what otherwise could’ve been a difficult transition into starting graduate school during the pandemic. Getting a say in shaping this important curriculum as an incoming grad student also helped me to feel much more confident assisting Subhankar in teaching the class last semester, as well as teaching it on my own this spring,” said Edreva, who was awarded the assistantship through the Center for Environmental Arts and Humanities.

“I was a student in a class on biodiversity crisis and conservation taught by Subhankar. I created a short graphic novel with my team of collaborators. It has been such a meaningful experience, and we've all contributed our individual strengths to bring it together. While it hasn't been without its challenges due to the pandemic, we've all put a lot of care and thought into the book with the goal of educating the public and advocating for a vibrant, more sustainable future for the Earth. Once we publish the book this summer, we hope that readers will join us in demanding that the U.S. creates a national biodiversity plan,” de Dóchas remarked.

Banerjee said the programs also want to make sure that diversity and equity of race, class, gender, and ability “are not an afterthought but foreground our programming that aims to address environmental justice, species conservation, and Indigenous rights.”

The creation of the Center for Environmental Arts and Humanities was made possible with a five-year seed grant from the Andrew W. Mellon Foundation and the long-standing financial support from the Lannan Foundation.

Banerjee noted that an undergraduate Native American Environmental Arts and Humanities scholarship is offered, as well as graduate scholarships, and travel and other research support to MFA students in Art & Ecology. The Art & Ecology programming has been made possible with generous financial support from the Lannan Foundation and The Andrew W. Mellon Foundation.

“The primary aim of all of our programming has been, and continues to be, to build bridges across various academic silos (arts, humanities, sciences, law, planning and public policy, to name a few) between academia and the communities in which we live and work; and between academia and government institutions to contribute to and help shape more just public policies,” he said.