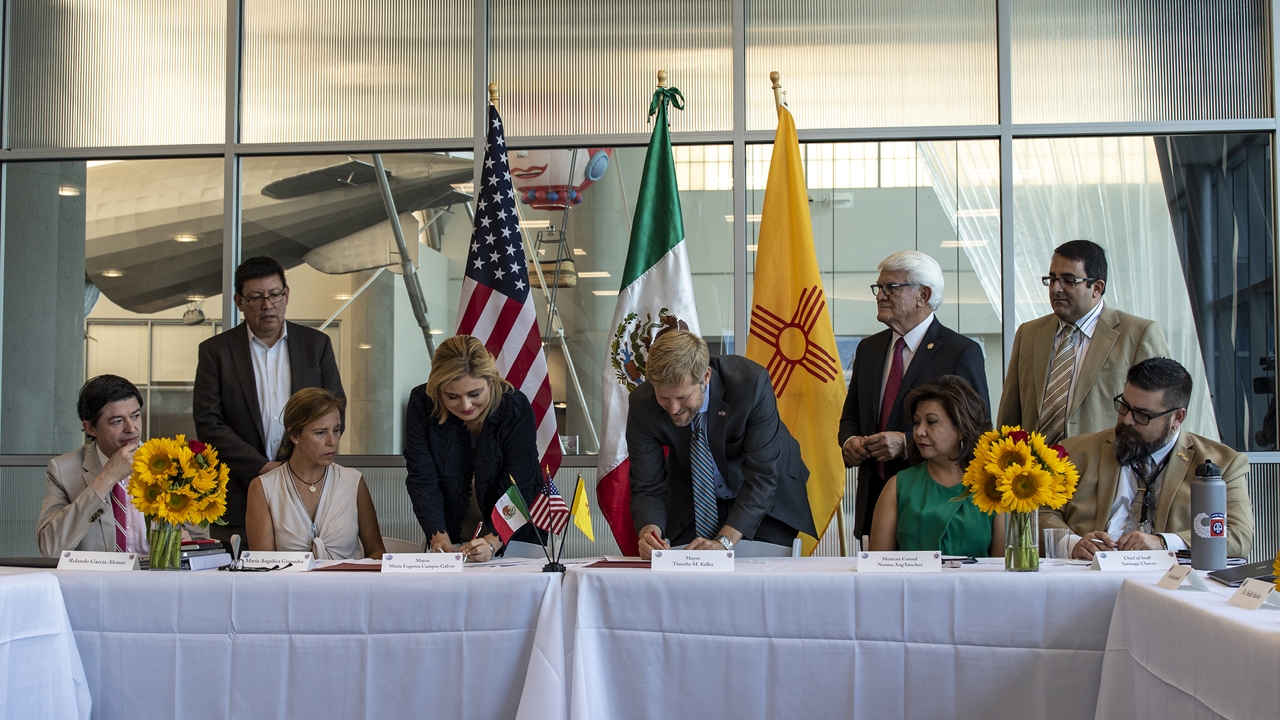 Galván and Albuquerque Mayor Keller sign the agreement between CHTM and CIMAV, with Dr. López (back row left) and Dr. Mafi (back row, far right) wait in the wings.
Credit: Natalie Rogers 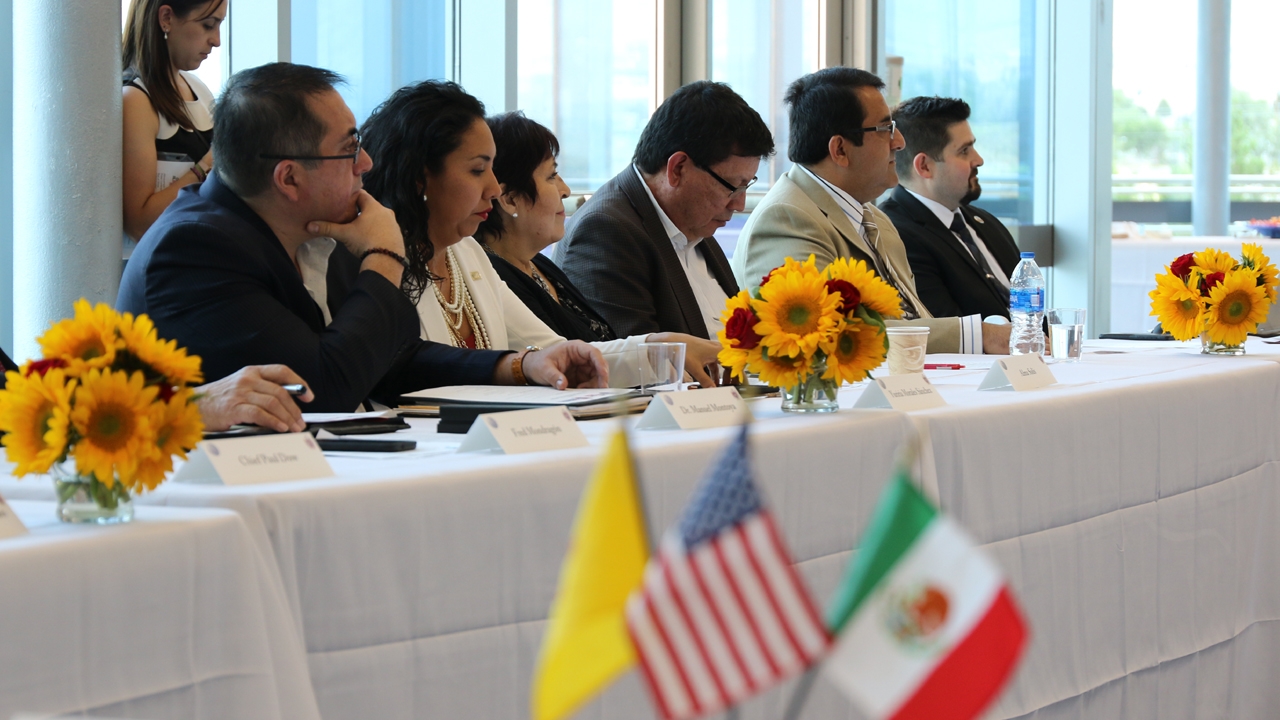 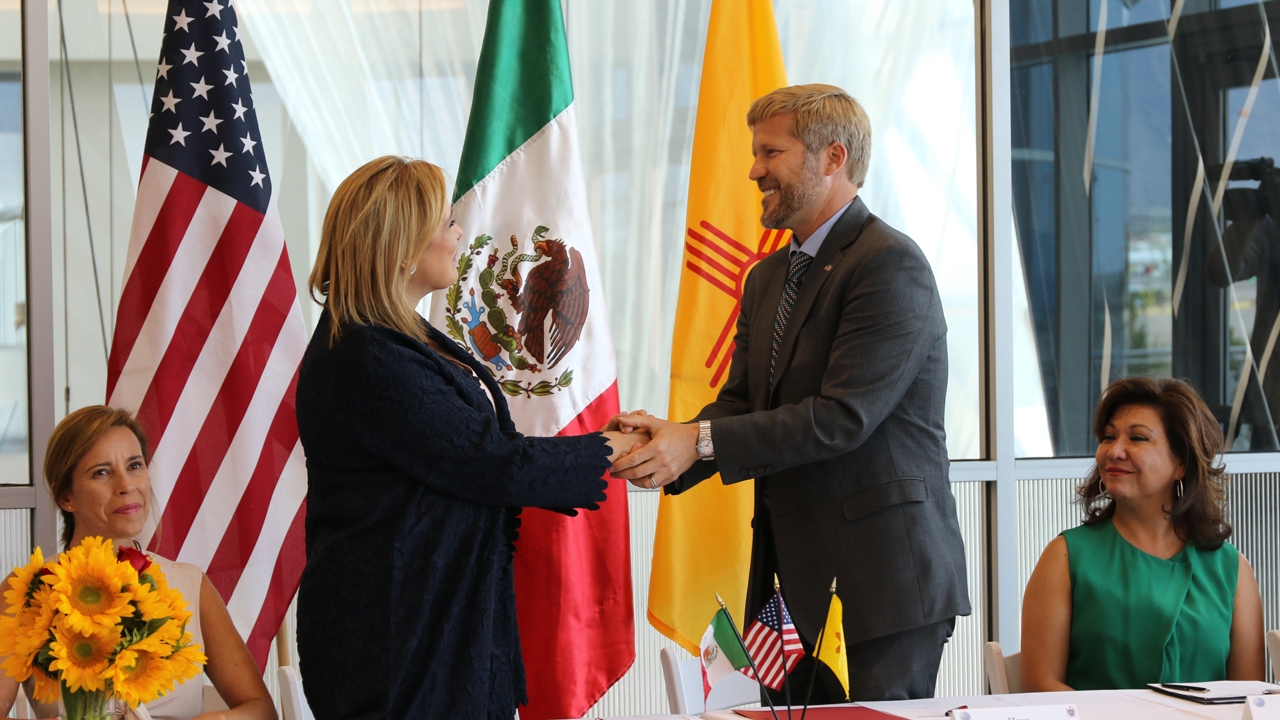 Science and research are without borders, and with advancements in travel and communications, the opportunities for international partnerships have never been more accessible. Collaboration on an international scale provides numerous benefits for researchers through the sharing of knowledge and cultures. In fact, according to Nature, one out of five research papers include international co-authors. UNM formalized its commitment to international collaboration recently as part of the signing of the charter for the Chihuahua Bilateral Commission.

Albuquerque Mayor Tim Keller and Chihuahua Mayor María Eugenia Campos Galván established the Commission with the objective to establish a framework for Mexico–U.S. Sister Cities to develop programs of mutual benefit to meet common needs and promote cooperation in the areas of economic development, tourism and cultural exchange, public safety, and education. Chihuahua is one of Albuquerque’s 10 sister cities. Sister Cities was created by President Dwight D. Eisenhower to foster friendship and understanding among different cultures and between former foes as an act of peace and reconciliation, and to encourage trade and tourism.

Mayor Galván said of the Commission, “The citizens from Chihuahua and from Albuquerque understand each other very well; we have the ability of looking into each other's eyes and relating with the needs that worry us as cities and as individuals. I am sure that now, we will look into the future of our cities walking hand-in-hand toward the economic growth, cultural exchange and public safety of our cities.”

“By formalizing collaborative research and education activities between CHTM and CIMAV, this agreement brings together two premier research-based economic incubation groups in the states of Chihuahua and New Mexico." — UNM Vice President for Research Gabriel López

Part of this cultural exchange and inter-border collaboration includes a Memorandum of Understanding between the UNM Center for High Technology Materials (CHTM) and Centro de Investigación en Materiales Avanzados (CIMAV), signed by UNM Vice President for Research Gabriel López and CHTM Director Arash Mafi. The hope is that the areas of expertise between CHTM and CIMAV are complementary so that an exchange of knowledge, ideas, and projects can be established.

“By formalizing collaborative research and education activities between CHTM and CIMAV, this agreement brings together two premier research-based economic incubation groups in the states of Chihuahua and New Mexico,” says López of the agreement. “These two regional centers of excellence share a common academic culture and, interestingly, transfer of materials technology across our region has been occurring for at least the last millennium. This agreement is a reaffirmation of the relevance of such historical relationships to solving issues that are of critical importance to our region’s economic prosperity.”

Mafi hopes for faculty and student researchers at CHTM to visit CIMAV and vice-versa, both for short-term access and long-term partnerships and sabbaticals, and that there will be an exchange of facilities, equipment, and technology.

“International collaborations are about bringing in a diversity of ideas and methods to solve challenging scientific and technological problems,” he says. “In materials and optics, like other high technology fields, we can exchange ideas and expertise and benefit from each other’s facilities and equipment to solve problems that would be impossible or very hard to tackle without such collaborations. Such collaborations are especially important when unique state-of-the-art tools are required and not one single institution has it all.”

Mafi also believes in the importance of building relationships between people of different cultural and historical backgrounds, and the uniqueness of Albuquerque’s relationship with the citizens of Chihuahua.

“I am very excited about this collaboration. The culture of science transcends national boundaries,” says Mafi. “Scientists cherish collaborations and the long-lasting friendships they create. Mexico and Chihuahua are special because they are our neighbors, which makes it much easier and manageable to interact. Of course, the shared cultural and historical aspects bring in a whole new dimension to such interactions.”

In the area of education, and in addition to the CHTM/CIMAV agreement, the Commission will encourage the exchange of teachers and/or students of all levels to share and learn the culture, language, and history of both cities, as well as other initiatives.

“This new Commission will create trade and culture connections between us and our sister city Chihuahua, Mexico,” said Mayor Keller. “We are taking the responsibility to step up and demonstrate that cities can help lead the way toward inter-border collaboration. Together, we will work towards strengthening economic development, tourism and culture, public safety, and education.”