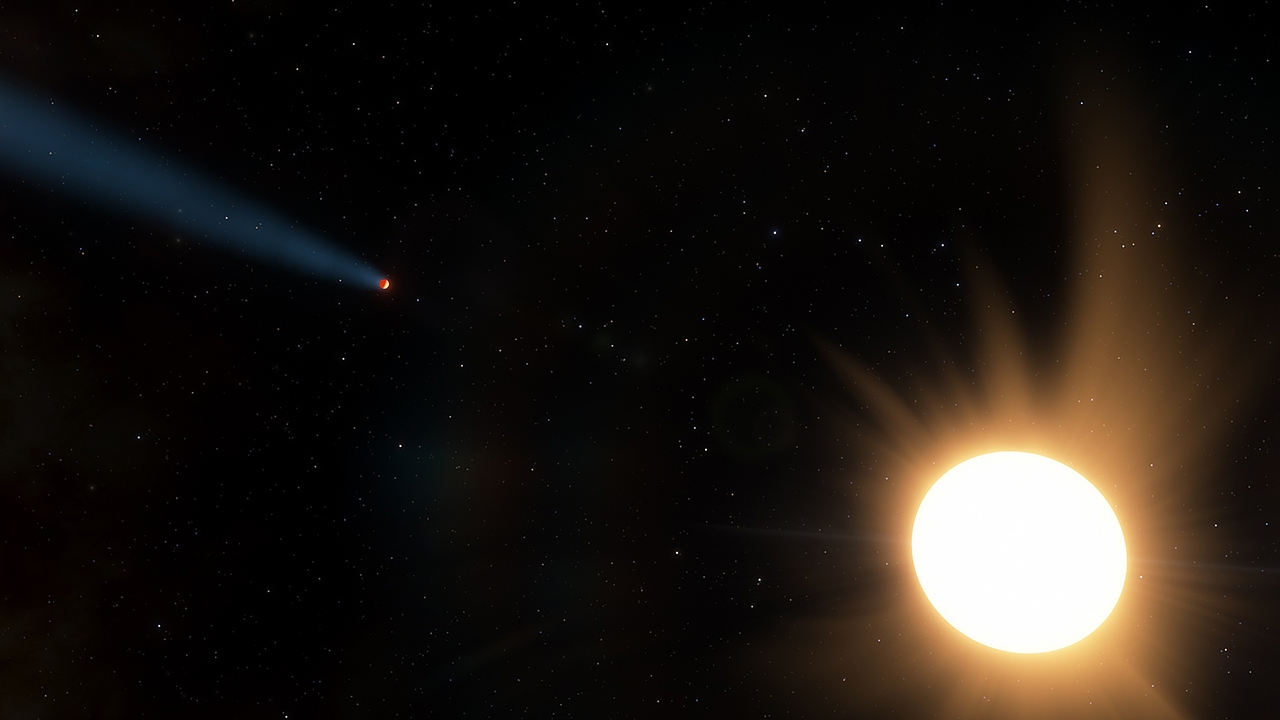 shows the LTT9779 system approximately to scale, with the hot Neptune-sized planet at left and its bright, nearby star at right. The trail of material streaming off of the planet is hypothetical but likely, based on the intense irradiation of this planet.
Credit: Ethen Schmidt, Kansas University 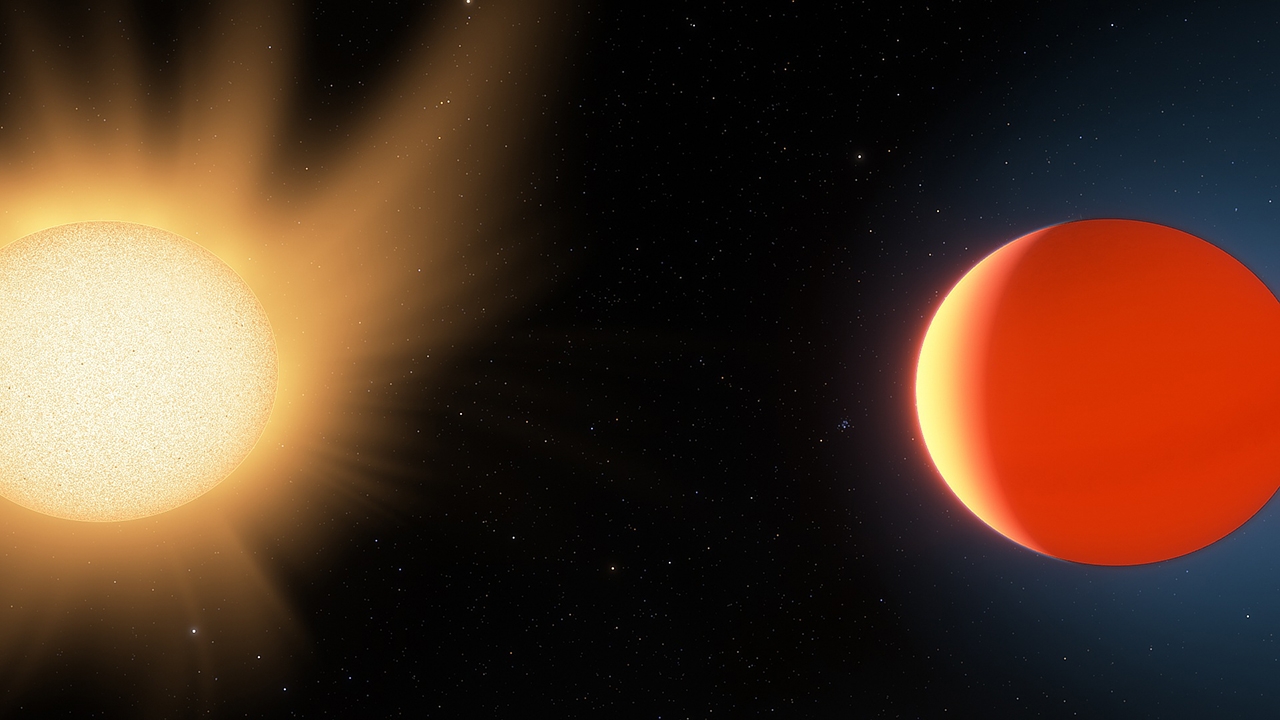 shows LTT9779b near the star it orbits, and highlights the planet's ultra-hot (2000 Kelvin) day-side and its quite-toasty night-side (around 1000 K).
Credit: Ethen Schmidt, Kansas University 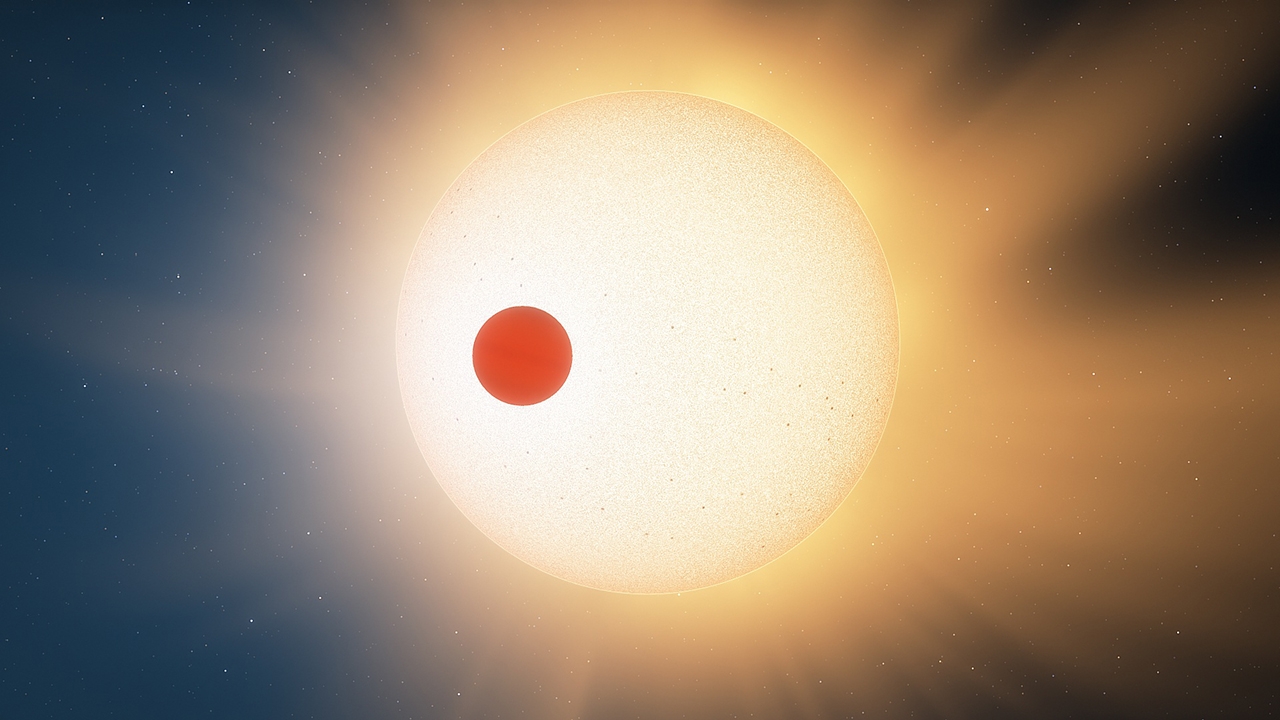 shows LTT9779b transiting the star it orbits. This transit briefly blocks an appreciable fraction of the star's light, and is how the planet was first discovered by NASA's TESS mission.
Credit: Ethen Schmidt, Kansas University

An international team of scientists recently measured the spectrum of the atmosphere of a rare hot Neptune exoplanet, whose discovery by NASA's Transiting Exoplanet Survey Satellite (TESS) was announced just last month.

The discovery was made with data provided from the now-retired NASA Spitzer Space Telescope, which allows a unique, infrared view of the universe to look into regions of space that are hidden from optical telescopes.

One of the main goals of NASA’s TESS mission is to find new, small planets that would be good targets for atmospheric characterization. Early in its mission, it found LTT9779b, a planet orbiting a Sun-like star located 260 light years away from Earth. This planet, a little larger than Neptune, orbits very close to its star. The planet is found in the "hot Neptune desert," where planets shouldn't exist. Indeed, most close-in hot exoplanets are either gas giants the size of Jupiter or Saturn that have enough mass to retain most of their atmosphere using their high gravity against the evaporation caused by the star, or small rocky exoplanets that have lost their atmosphere to the star long ago.

“This ultra-hot Neptune is a ‘medium-sized’ exoplanet that orbits very close to its star (it takes just 19 hours to complete an orbit), but its low density indicates that it still has an atmosphere weighing at least 10 percent of the planet’s mass,” explained University of New Mexico Physics and Astronomy Assistant Professor Diana Dragomir, who is leading the work which involved more than 25 institutions.

The age of this system is 2 billion years. At this high temperature, the planet’s atmosphere should have evaporated long ago, early in the system’s life. “Hot Neptunes are rare, and one in such an extreme environment as this one is difficult to explain because its mass isn’t large enough to hold on to an atmosphere for very long. So how did it manage? LTT9779b had us scratching our heads, but the fact that it has an atmosphere gives us a rare way to investigate this type of planet, so we decided to probe it with another telescope,” Dragomir added.

To investigate its atmospheric composition and shed further light on its origin, scientists obtained secondary eclipse observations with the Spitzer Infrared Array Camera (IRAC) of the hot Neptune. The Spitzer observations confirmed an atmospheric presence and enabled a measurement of the planet's very high temperature, approximately 2,000 Kelvin (about 3,000 degrees Fahrenheit). “For the first time, we measured light coming from a planet that shouldn’t exist!” Said Dragomir.

After combining the Spitzer observations with a measurement of the secondary eclipse in the TESS bandpass, the scientists studied the resulting emission spectrum and identified evidence of molecular absorption in the planet’s atmosphere, which they believe is likely due to carbon monoxide. This molecule is not unexpected in the atmospheres of hot large planets (hot Jupiters), but to find it in a hot Neptune may provide clues on the origin of this planet and how it managed to hold onto its atmosphere. This result constitutes the first detection of atmospheric features in an exoplanet discovered by TESS, and the first-ever for an ultra-hot Neptune.

“If there’s a lot of atmosphere surrounding the planet, as is the case for LTT9779b, then you can study it more easily,” said Dragomir. “A smaller atmosphere would be much harder to observe.” The results indicate that LTT9779b is an excellent target for additional characterization with NASA’s upcoming James Webb Space Telescope (JWST), which could also verify whether the observed molecular absorption is indeed due to carbon monoxide.

A companion paper, led by Kansas University Assistant Professor Ian Crossfield, also found signs that point to the planet’s atmosphere having a higher level of heavy elements than expected. This is additionally intriguing because the two similarly-sized planets in our Solar System, Neptune and Uranus, are primarily composed of light elements like hydrogen and helium.

“LTT9779 is one of those super-exciting targets, a very rare gemstone for our understanding of hot Neptunes. We believe we detected carbon-monoxide in its atmosphere and that the permanent dayside is very hot, while very little heat is transported to the night side,” said Björn Benneke, professor at Université de Montréal and member of the Institute for Research on exoplanets (iREx). “Both findings make LTT9779b say that there is a very strong signal to be observed making the planet a very intriguing target for future detailed characterization with JWST.”

Together, these results set the stage for similar investigations of a larger sample of exoplanets discovered in this hot Neptune desert, which are key to uncovering the origin of this unique population of exoplanets.

The research, Spitzer Reveals Evidence of Molecular Absorption in the Atmosphere of the Hot Neptune LTT 9779b, was published in The Astrophysical Journal Letters and supported in part by NASA through a Caltech/Jet Propulsion Laboratory (JPL) grant.

** A companion paper and press release is related to this research and should also be reviewed as part of any media interest. The press release, from Kansas University, is titled ‘Hot Neptune’ 260 light years away that ‘shouldn’t exist.’