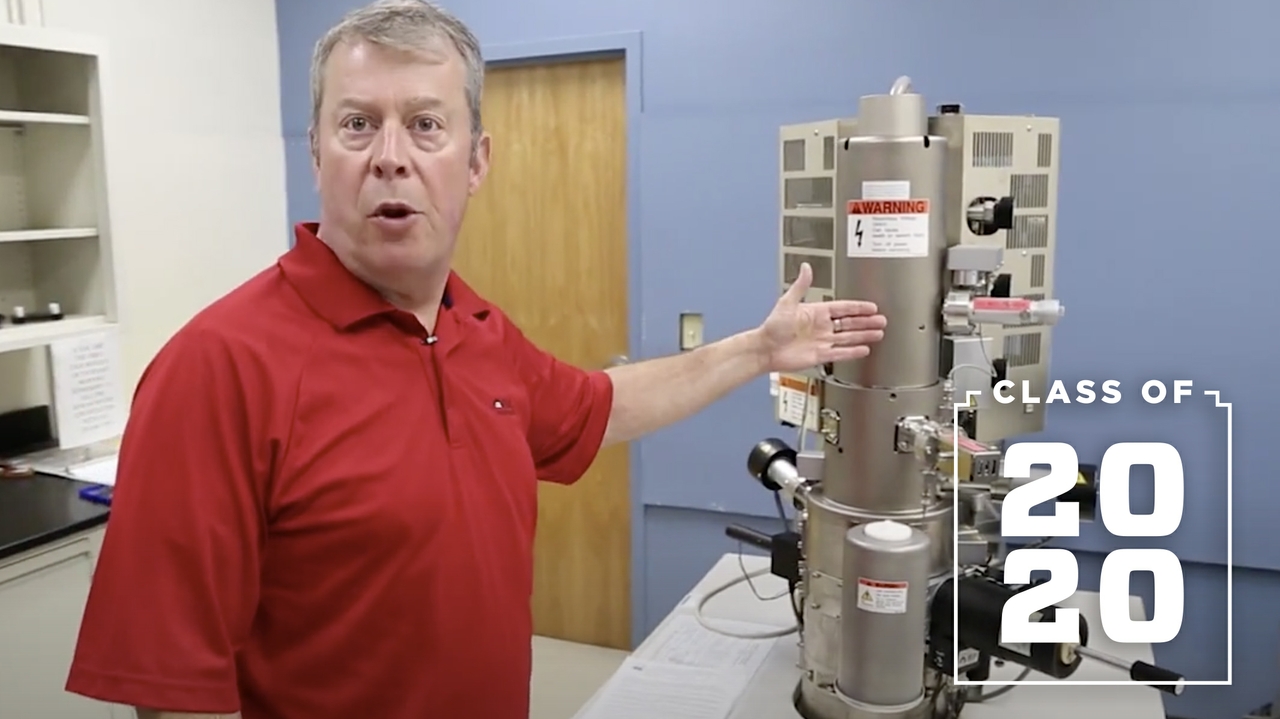 Decades in the making, a fixture in UNM chemical engineering earns his graduate degree

The year was 2000. Bill Clinton was in the last year of his presidency, Britney Spears was topping the music charts, and the world was breathing a collective sigh of relief that the “Y2K” predictions that many feared would shut down computers and electronics around the world were largely unfounded.

Also that year, a student named Geoffrey Courtin started his master’s degree in chemical and biological engineering at UNM.

Fast forward 20 years, and as the world is in the midst of a global pandemic and on the verge of inaugurating another new president, Courtin is celebrating the end of his journey, finally earning his Master of Science degree from the Department of Chemical and Biological Engineering.

“There’s a sense of closure and accomplishment,” he said. “Leaving things undone is not something that sits well with me.”

The Long Island, N.Y., native attended college when he was 18, but wasn’t really into it and decided to hit the workforce instead. He worked in the food industry, then in the automotive industry, landing a job as a parts manager of a high-end dealership.

Courtin had some family members in New Mexico and had a friend who attended UNM, so he sold his house and headed west to be an undergraduate in chemical engineering at UNM, earning his bachelor’s degree in 1998.

After graduation, he worked a couple of years at Intel in Rio Rancho, and although it was a good job, he grew tired of the 24/7 culture and pressure and decided to pursue graduate school.

As a graduate student, he was able to become a research assistant, but his advisor was near retirement and ran out of funding, so his degree progress lagged.

“It was a bad set of circumstances,” Courtin said.

Although his degree progress was delayed, it never really stopped. In 2002, Courtin landed a full-time job as a research engineer for the Department of Chemical and Biological Engineering, managing and designing lab experiments, maintaining equipment like the scanning electron microscope (SEM), serving as safety officer and teaching students. He said that often all-consuming job definitely delayed work on his master’s degree, but it was time well-spent.

“One of the things I like about my job is that it combines hands-on work with intellectual endeavors,” he said.

He especially enjoys teaching and working with students, such as when he was able to mentor students in the Waste-Management Education and Research Consortium (WERC) competition at New Mexico Tech for several years.

Courtin also enjoys being the go-to person for the undergraduate chemical and biological engineering lab in Centennial Engineering Center and played a key role in moving the department’s lab facilities out of the old Farris building and into the new spaces in Centennial a few years ago.

His job has been made even more challenging the last year with the COVID-19 pandemic, which abruptly changed the way in-person teaching and especially lab education was conducted.

“As hard as we say it is for faculty and staff, it’s much more difficult for students.”

He credits Sarah Dominguez, academic advisor in the department, with helping him through the hoops of finally completing his degree after so many years.

“I got a boatload of help from her, and she figuratively held my hand” through the process, he said.

“Being an older student allowed me to be much more focused.”

Now that he’s done with school, he may have more time for his hobbies, which include golf, hiking, travel, and in the summer of 2020, he took up a new hobby, that of “urban farmer,” planting produce at the Rio Grande Community Farm.

With his new academic credential, Courtin is looking forward to becoming the instructor of record on the lab courses he teaches. Of course, working with so many Ph.D.s, he said he’s being encouraged to pursue that course, although he is undecided on whether or not that level of work is for him.

“I always tell my students that you have to enjoy research to get a Ph.D.,” he said. “Research is not always my cup of tea. I’m not sure what the future holds, but this degree definitely opens doors.”