UNM Newsroom / News / Dedication and service: Agora celebrates 50 years, remains one of the oldest crisis centers in the country 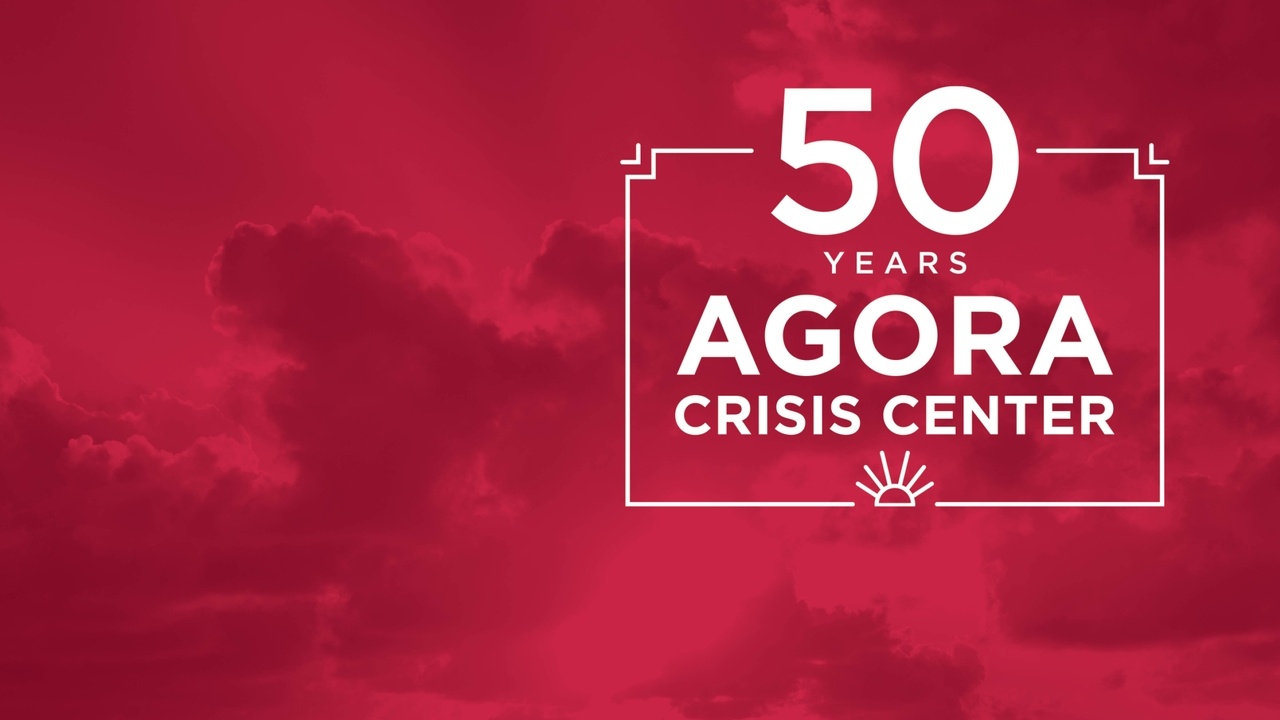 In 1970, a University of New Mexico freshman in distress sought professional mental health help on campus. Unsuccessful in finding the help he needed, the student died by suicide. In response to the student’s death and spearheaded by then Psychology Chair Frank Logan, a group of students and professors founded Agora.

It was one of the first 24-hour crisis centers in the United States that provided free, emotional support to anyone in the world.

"I’m a mother. I’m a wife. I’m a teacher. I’m a friend. I’m a human - all of those are my most important roles - and all of those things have been augmented and enhanced by my time at Agora." - Stephanie Holstad Ramsey, Former Agora volunteer

Molly Brack still remembers walking through the doors of Agora in 1991; the then graduate student had only planned to volunteer a few semesters and continue her career down a different path. Now, nearly 30 years later, Brack serves as the director of Agora Crisis Center as volunteers and alumni celebrate its 50th anniversary.

Training and Service
The student organization relies on nearly 150 volunteers, most of whom are students. They go through 40 hours of training to become crisis hotline specialists. Once training is complete, all volunteers commit to sit one 4-hour shift each week. 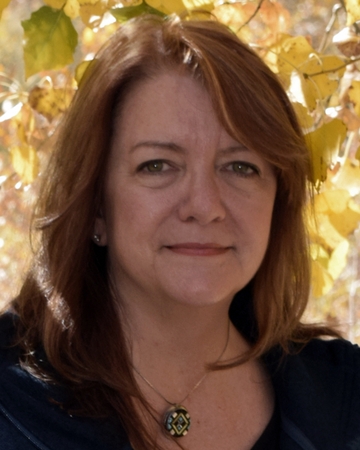 “The fact that this model has worked for us for the last 50 years, says something remarkable about our community,” Brack said. “All of our volunteers show up just to help individuals in distress.”

For the first 30 years, Agora served individuals in distress through a telephone helpline and averaged nearly 1,200 calls each year. In 2001, Agora applied for its first grant to begin suicide prevention trainings throughout New Mexico. Brack said once the center garnered more attention, the number of calls into Agora skyrocketed. In 2010, the center also enabled a “chat” service for individuals to utilize, offering online emotional support. Agora, part of the National Suicide Prevention Lifeline, helped implement the chat service at crisis centers nationwide. Today, the center averages more than 30,000 telephone calls and chats each year.

“We did it because we noticed that crisis centers didn’t get a lot of calls from young people,” Brack said. “However, we know for people 24 years old and younger, suicide is the second leading cause of death. So, we know that young people have a lot to talk about.”

Nearly 10 percent of the center’s calls come from that younger age group, but Brack said that number increases to nearly 85 percent on its chat service. Brack said individuals who use Agora’s helpline or chat service reach out to talk about their day or to talk about more serious behavioral health discussions that can include depression, anxiety and suicide.

“Sometimes people call just because they’re lonely. Right now, that’s something that’s affecting everyone, being that we’re all more isolated than usual, Brack said. “So many people just call us because they want to have a connection with someone. A volunteer is that ‘someone.’”

Former Lobo, Stephanie Holstad Ramsey, was one of those volunteers during her years at UNM. She graduated from the University in 2002 with a bachelor’s degree in Psychology. Ramsey went on to volunteer in the Peace Corps, later receiving her Ph.D. from Columbia University Teachers College.

“The training I received at Agora was impressive and imperative to understanding my role as a listener and volunteer,” Ramsey said. “We learned how to be comfortable with silence and letting people say what they needed to say without interjection.”

Ramsey stressed the importance surrounding the word “courage” when it comes to volunteers and the individuals on the other end of the phone.

“The courage it takes to ask someone, ‘Are you thinking about suicide?’ that’s a very scary question to ask a friend, let alone a stranger on the phone. Yet, that’s such a valuable question to ask, because maybe that person will say, ‘no’ and get offended that you asked. Or maybe, they say, ‘yes’ and you can now take it one step further by offering additional resources,” Ramsey said. “As a volunteer, I learned you can’t be afraid of offending people if it illuminates a problem they’re facing.”

Ramsey said the years she spent volunteering at Agora would carry into every other aspect of her professional and personal life.

“I’m a mother. I’m a wife. I’m a teacher. I’m a friend. I’m a human - all of those are my most important roles - and all of those things have been augmented and enhanced by my time at Agora, by the training, people and experience,” she said.

Agora’s History
David Dennedy-Frank will say Agora’s mission to serve others in the midst of their darkest moment has never changed. He can attest to that because he was there when Agora first opened its doors.

Being one of the student founders, Dennedy-Frank recalled the atmosphere surrounding the time Agora was established.

“It was a time of great political unrest and there was so much conflict at UNM and around the country regarding the Vietnam war,” Dennedy-Frank said. “UNM, in a sense, was shut down due to ongoing protests. It was also around the same time that a young man, who was depressed, and thinking about ending his life, went looking for help on campus.” 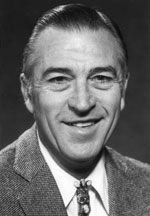 Dennedy-Frank said he remembers the tension that followed the student's suicide and the call to action to ensure other individuals seeking assistance would have a safe place to go. He called it a humbling realization for the center’s founder, Frank Logan.

“He did something positive with a tragedy that shock him, along with the entire campus community,” Dennedy-Frank said.

Dennedy-Frank, a psychology and sociology major, was one of the first UNM students to undergo training to volunteer when the center opened.

“I was part of Agora’s foundation and that’s a real honor, but for the students who have kept this going for 50 years, that’s the real accomplishment and I think that speak volumes about the dedication to this kind of resource,” Dennedy-Frank said.

"There have been times in our history where it’s looked like we wouldn’t have any funding at all to keep this place going and our volunteers have said, 'We’ll answer the phone anyway.'" - Molly Brack, Agora Crisis Center director

Following Agora’s foundation, according to Brack, several crisis centers in the ‘70s popped up around the country.

“We’re still one of those that really stuck to the volunteer model,” she said. “Research shows, for people who are looking for supportive listening, volunteers have better outcomes.” 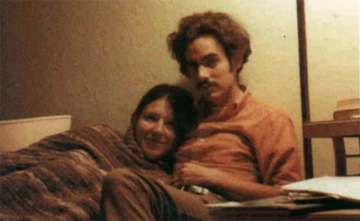 Dennedy-Frank would go on to receive his Ph.D. in clinical psychology. He said, not only did Agora serve as a starting point in his career, it served as a fond memory of the time he spent building a relationship with another volunteer, Diane Dennedy, who would later become his wife of 43 years.

Ongoing Mission
Staff and volunteers made big plans to roll out a celebration fitting for Agora Crisis Center’s 50th anniversary, but everything, other than a commitment to serve others, came to a halt as the COVID-19 pandemic swept through the nation.

“We started planning a 50th anniversary celebration almost a year ago. The UNM Foundation even sent out a mailer to all UNM Alumni, so many of whom got in touch with us to find out how we were going to celebrate,” Brack said. “While we can’t celebrate in person, that doesn’t take away from the dedication volunteers have shown for the last 50 years. That passion will keep us going for another 50 years. There have been times in our history where it’s looked like we wouldn’t have any funding at all to keep this place going and our volunteers have said, ‘We’ll answer the phone anyway.’”

The proven dedication that speaks volumes to the true meaning within the walls at Agora Crisis Center.