Tkach started at Popejoy in October 1996 as business manager. Two years later, he was named interim director, then director in 2000.

Tkach came to New Mexico in 1996 from New Jersey, where he had worked in private business and in the arts. His last position before moving to New Mexico was a dual appointment, serving as executive director for the Monmouth County Arts Council and for the Count Basie Theatre in Red Bank.

Tkach earned his Bachelor of Science in Finance from Montclair University in 1985 and his Master of Arts in Arts Management from City University London in 2005. 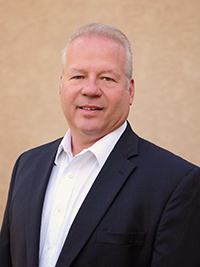 When Tkach came to Popejoy in 1996, it was facing significant financial difficulties. Once he became director, he was charged with increasing revenue and stabilizing Popejoy's finances. "I was very excited to be named director because I saw a great deal of opportunity and potential for Popejoy to grow,” said Tkach.

For Popejoy to thrive, he recognized that it needed to change its programming strategy and to start fundraising. He addressed the programming issue by seeking more appealing fare, especially finding shows that would attract subscribers. “Theaters depend on subscribers to provide a solid base for a theater’s financial stability,” said Tkach. “It’s the group most likely to buy tickets every year.”

Under his leadership, Popejoy established a relationship with Broadway producers to attract touring Broadway shows to New Mexico. “Popejoy is the only theater in the state with the technical requirements and the seating capacity to make it possible for the biggest touring shows to come here,” he said.

Popejoy has since presented many of the biggest touring Broadway musicals, including The Phantom of the Opera, Disney’s The Lion King, Wicked, Jersey Boys, Spamalot, The Book of Mormon, Les Misérables, Cats, Chicago, and more. That strategy paid off with subscriptions increasing more than tenfold from his first year through the 2021-2022 season.

Tkach also convinced UNM to allow Popejoy to fundraise, something common for most performance venues but a more complex issue within the university environment, since UNM has its own fundraising operation. Tkach argued that significant capital improvements would be required for Popejoy to be able to house the caliber of performances needed to attract subscribers for years to come.

Popejoy started raising money in 2001 and those efforts have funded significant, needed improvements including new seating; renovation of upper and lower lounge/restroom spaces; renovation of the artist support spaces, such as dressing rooms and green rooms; a state-of-the art sound system; and ongoing upgrades to lighting. Tkach also oversaw the conversion of office space into a donor lounge to celebrate and recognize Popejoy donors.

His work also included building a successful staff to run Popejoy Hall. Other halls of equivalent size have staffs two to three times as large, but by staying lean and staffing the operation with people who loved the hall and its mission, Popejoy thrived.