A new exhibit on display in Zimmerman Library aims to portray different local and national scenarios within Latin American reality, through a set of powerful, varied images representing food and drink in Brazil, Mexico, Panama, Puerto Rico and Nicaragua.

“Food for Thought” is on view through Feb. 28 in the Herzstein Gallery in Zimmerman Library. 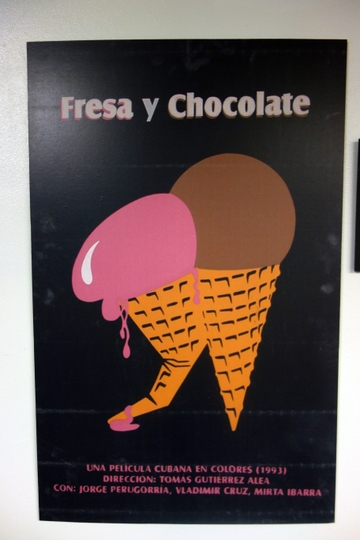 Café con leche comes to depict the richness of Puerto Rican café, along with the ubiquity of women's power, reinforced by guerrilla environment, and channeled to descendants through their breasts.

Cuba revolucionaria is represented by a poster on Fresa y chocolate (1993), a Cuban film with homosexuality as a pivotal vector trying to break down social prejudices.

México jornalero is a set of different posters portraying the importance of agricultural subsidies in the 1970s onwards, and how those, implemented within an asymmetrical international food system, have deeply affected Mexican ways of producing and its dietary habits.

In displaying these vivid images, University Libraries hopes to boost people's reflection on conflicting discourses and raise awareness about how the Western way of life has consequences in other countries.

The exhibit was curated by Santiago Carrasco García, a current graduate student in Latin American Studies. He earned a BA in Journalism from the Universidad Complutense de Madrid in 2014 and an MA in Spanish from the Universidad Autónoma de Madrid in 2016. He is pursuing his second master's degree at UNM because he was impressed by the opportunities for students in the program. Carrasco García also work at University Libraries supporting the Latin American collections.