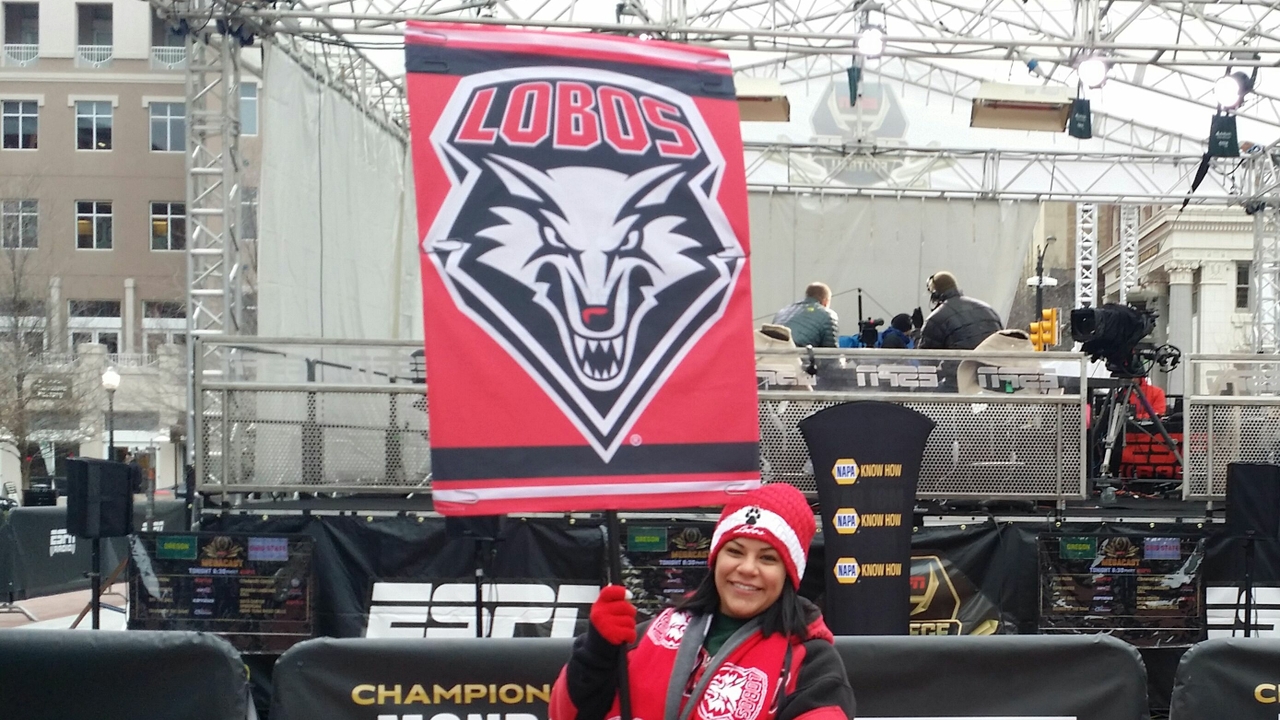 Valerie Flores is a teacher in Texas; she’s also a proud alumna of The University of New Mexico and for the last six years she’s made it known on national TV during each college football season.

It started in 2014 with a cardboard poster and some paint.

“I had no idea what was going on, but I quickly got the idea,” she said.

The idea? It’s to make sure your school’s flag, or in Flores’s case, her cardboard sign gets some air time during ESPN’s College GameDay broadcast.

“I get really excited when people come up and say, ‘Hey, I’m from New Mexico. Can I get a picture with your flag?’” - Valerie Flores, UNM Alumna

The pre-game show is part of ESPN’s "coverage of college football, broadcast each Saturday morning during the college football season." The program is typically broadcast from the campus of the team hosting a “featured game.”

Flores makes sure she’s at every College GameDay in Texas.

“If I want my flags to be seen, I have to get there before 5:30 a.m.,” Flores said. “There’s really no break unless it’s the two-minute commercial break, so by the end of the three hours, it’s pretty exhausting.”

She graduated from UNM in 2000, then quickly moved to Fort Worth, Texas. She said her classroom is covered in Lobo flags and memorabilia.

“I like to show support for all our student athletes,” Flores said. “I live in Texas and I can’t come out here every week for each game, so my way of showing support is with my flagpole.”

She said she’s always looking for loyal Lobo fans who want to join her.

“It’s hard but it’s so much fun and you meet a lot of people,” she said. “I get really excited when people come up and say, ‘Hey, I’m from New Mexico. Can I get a picture with your flag?’”

Flores said she’s thinking about expanding her mileage in 2020 by traveling to some of the College GameDay broadcasts in Oklahoma.

“That’s my goal,” Flores said. “Honestly, as long as I’m close enough and as long as I have the means to get out there, I’m going to do it.”

Flores said people often ask her, “Why do this?”