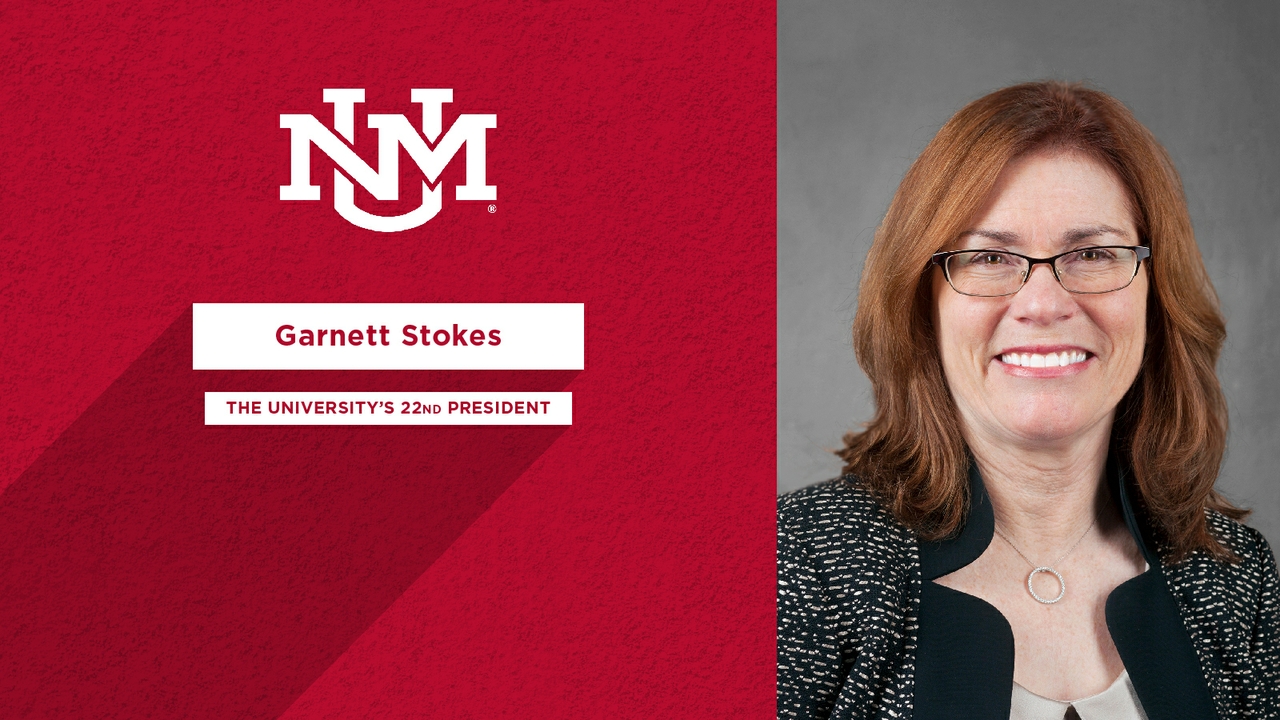 The University of New Mexico Board of Regents has unanimously selected Garnett S. Stokes as its 22nd president. Stokes, 61, will succeed Interim President Chaouki Abdallah, who has served in the role since the beginning of 2017. Stokes will take office March 1, 2018.

Stokes’ selection follows a 10-month search by a 22-member committee, chaired by UNM Board of Regents’ President Rob Doughty, that included regents, faculty, students, staff and alumni. Isaacson, Miller, a national executive search firm, was engaged in November 2016 to work alongside the committee.

Stokes was selected by the UNM Board of Regents after three weeks of public engagements between the finalists and members of the university community, as well as meetings with UNM administrators and the Board. The Board compiled feedback from hundreds of campus community members through online surveys and listening sessions conducted over the past several weeks. The Board then met with representatives of a number of campus constituencies before their deliberation and vote on Oct 30. She has accepted a five-year contract with a salary of $400,000.

In making the announcement Doughty said, "We are proud and honored to announce that Garnett Stokes has accepted our offer to become UNM's next president. This is a transformational time at UNM, and Dr. Stokes brings the experience, skills and vision that UNM needs in a president to drive UNM beyond just its potential.”

He added that he was pleased with how well the entire campus community found a common connection in choosing its next leader. “Dr. Stokes’ appointment reflects the campus’ dedication to finding a President who will deliver on UNM’s commitment to student success and serving the citizens of New Mexico,” stated Doughty. “Each of us defines all of us, and we have chosen Dr. Stokes to join us in defining UNM through her vision, passion, and direction. Together, we will shape the future of UNM.”

“I am honored to be selected as the University of New Mexico’s new President. I am enthusiastic about what we can accomplish together to benefit UNM’s faculty, staff, students, and alumni.” - Garnett Stokes, UNM's 22nd president

The university's faculty expressed its strong backing for choosing Stokes as president. A memo to the Regents from The Committee on Governance and the Faculty Senate Operations Committee outlined the results of a faculty survey that garnered 632 responses, or 32 percent of those eligible to participate. The survey results indicate that Dr. Stokes achieved the greatest level of faculty support among faculty who participated in the survey.

"Dr. Stokes greatly impressed the campus community, as reflected in the resounding support the Board received for her selection,” said Doughty. “She was hands down the consensus candidate. I am confident that with her passion for higher education, commitment to both student and faculty success, and experience in developing strong leadership teams, that she is the perfect fit to be president of UNM.”

Stokes stated, “I am honored to be selected as the University of New Mexico’s new President. I am enthusiastic about what we can accomplish together to benefit UNM’s faculty, staff, students, and alumni.”

As a leader in higher education for several years, Stokes has advocated for an aggressive agenda for transforming the student experience and strengthening the ranks of the faculty and the environment that supports them. During her tenure at the University of Missouri, she has been praised for building an outstanding and diverse leadership team dedicated to student success. Under her direction, the university established the Office of Civil Rights and Title IX. As interim president at Florida State, Stokes created a task force to address sexual and domestic violence and spearheaded the university's "kNOw MORE" campaign. She led FSU's Diversity and Inclusion Council committee on Recruitment and Retention while she was Provost.

“Garnett Stokes is an exemplary leader who has made positive contributions to our culture that will impact Mizzou for years to come,” MU Chancellor Alexander Cartwright said. “I am delighted for her personally, but I will miss the opportunity to continue to work with Dr. Stokes so closely. Among her many accomplishments at Mizzou, Dr. Stokes led a very complex budgeting process this summer, established the university’s Office of Civil Rights and Title IX and has hired nine of our 12 deans. She excels at finding the right leaders for critical positions—individuals who are academically very strong but also a good fit for the institution and committed to student success. Garnett is a smart, capable leader who will be a great asset to the University of New Mexico. I wish her all the best.”

A first-generation college graduate, Stokes earned a B.A. in psychology from Carson-Newman College in Jefferson City, Tennessee, and M.S. and Ph.D. degrees from the University of Georgia in industrial/organizational psychology. She becomes the first female president in UNM’s 128 year history. Her husband, Dr. Jeff Younggren, is a forensic psychologist and a retired Colonel in the U.S. Army. They have two grown children, Brad and Beth Ann, and four grandchildren.

At UNM, Stokes said her job will be “to strengthen UNM’s role in serving as the flagship university in the state.” She emphasized that her priorities would center first on getting to know the people at UNM, in the Albuquerque community, in the state, and in supporting the University’s current strategic plan. “Jeff and I are thrilled at the opportunity.” They will reside on campus at University House.