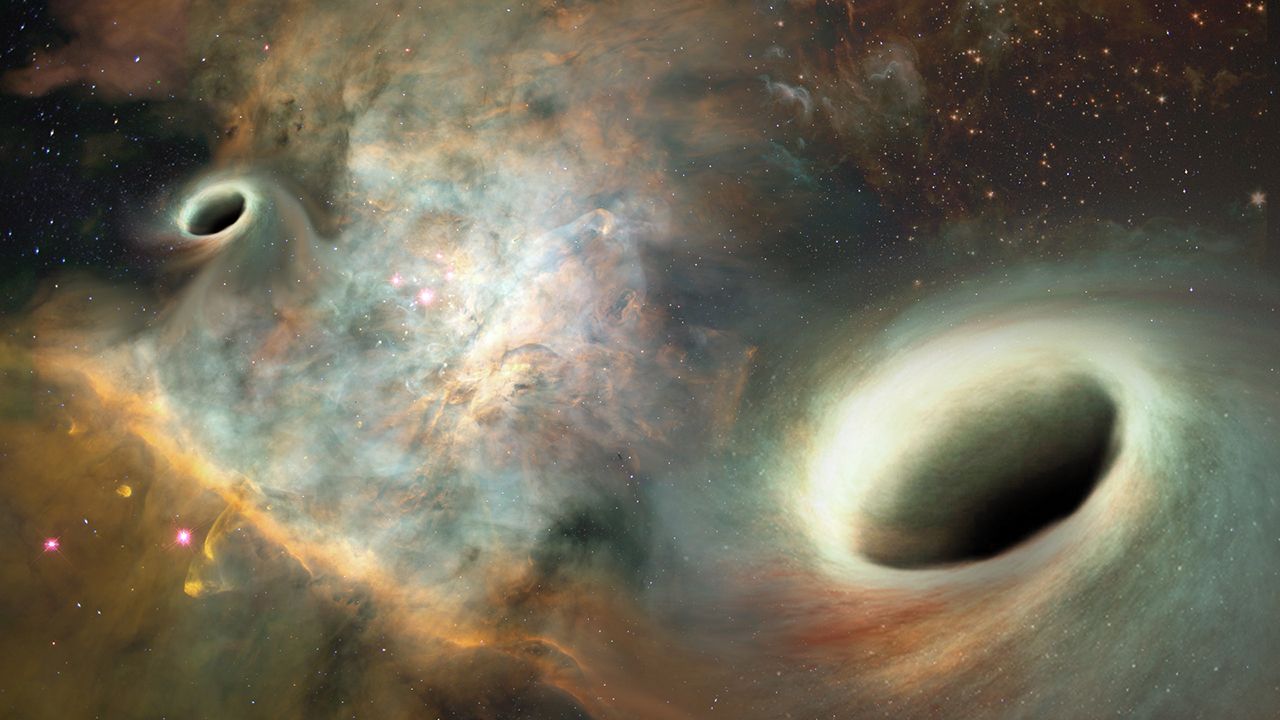 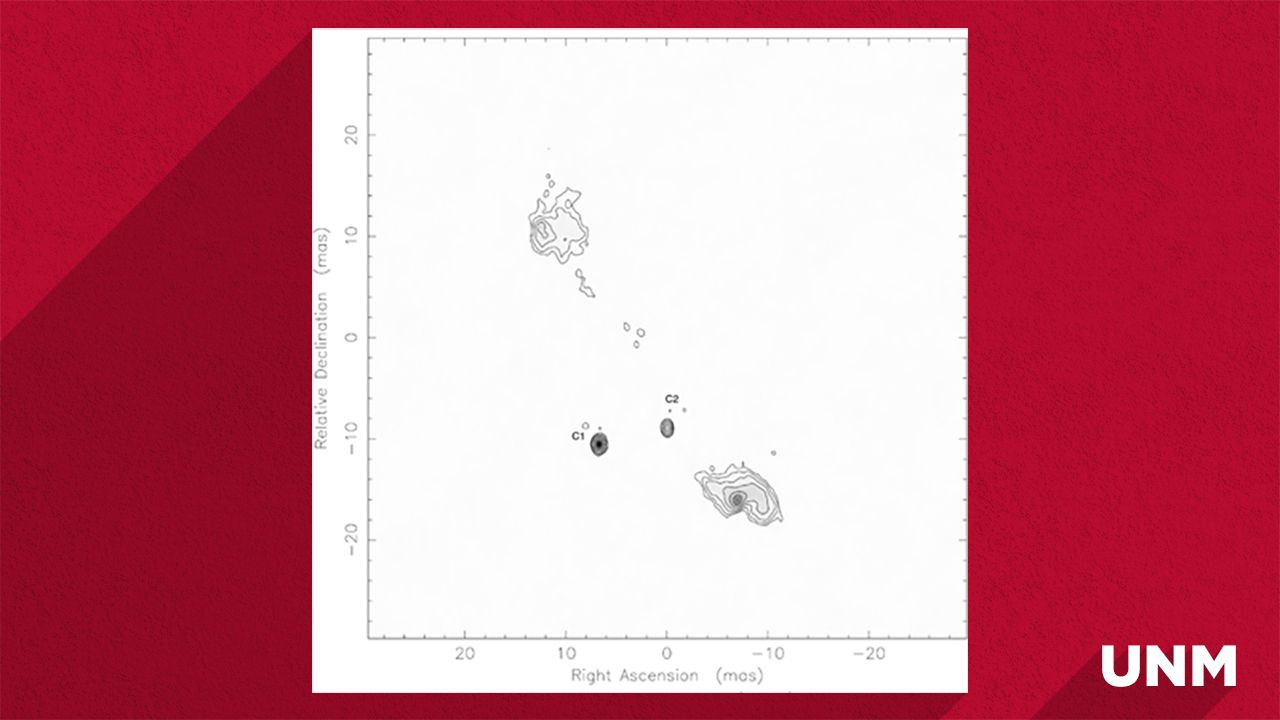 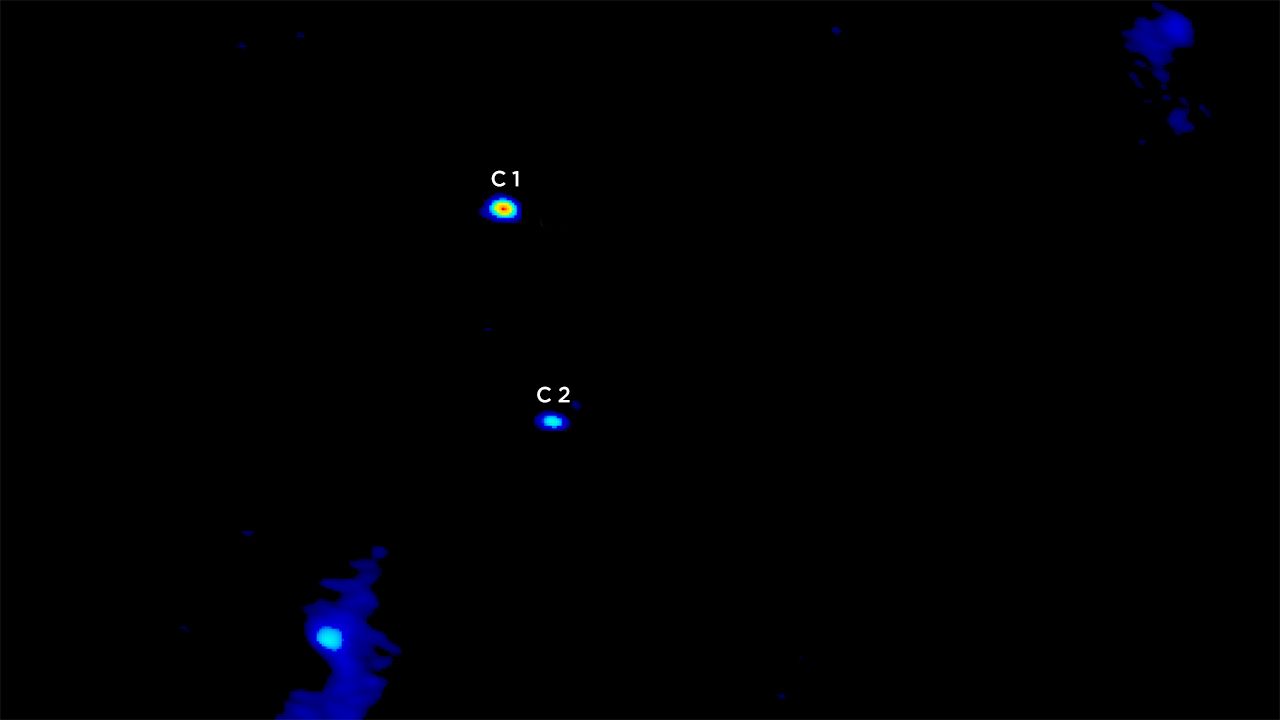 A colored VLBA map of radio galaxy 0402+379 at 22 GHz. The galaxy hosts two supermassive black holes at its center, being denoted as C1 and C2. 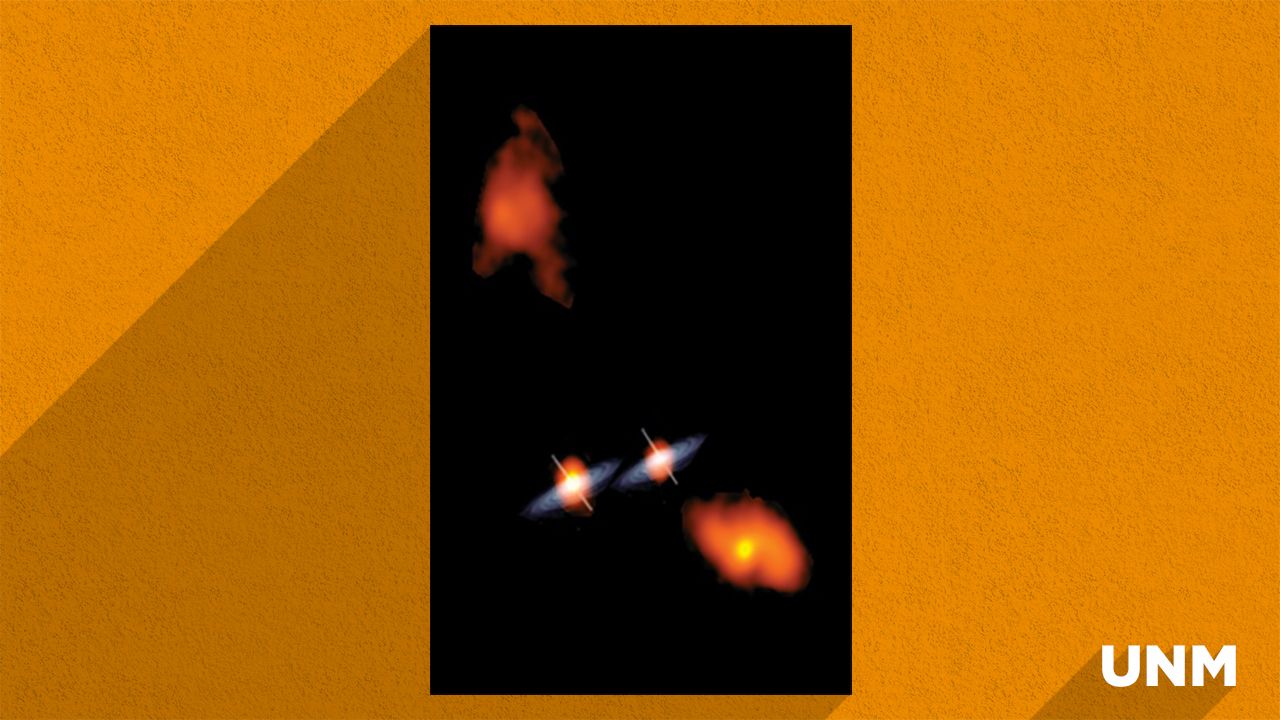 This is a false color VLBA map of radio galaxy 0402+379 at 15 GHz. It hosts two supermassive black holes at its center, being represented by accretion discs with twin jets. 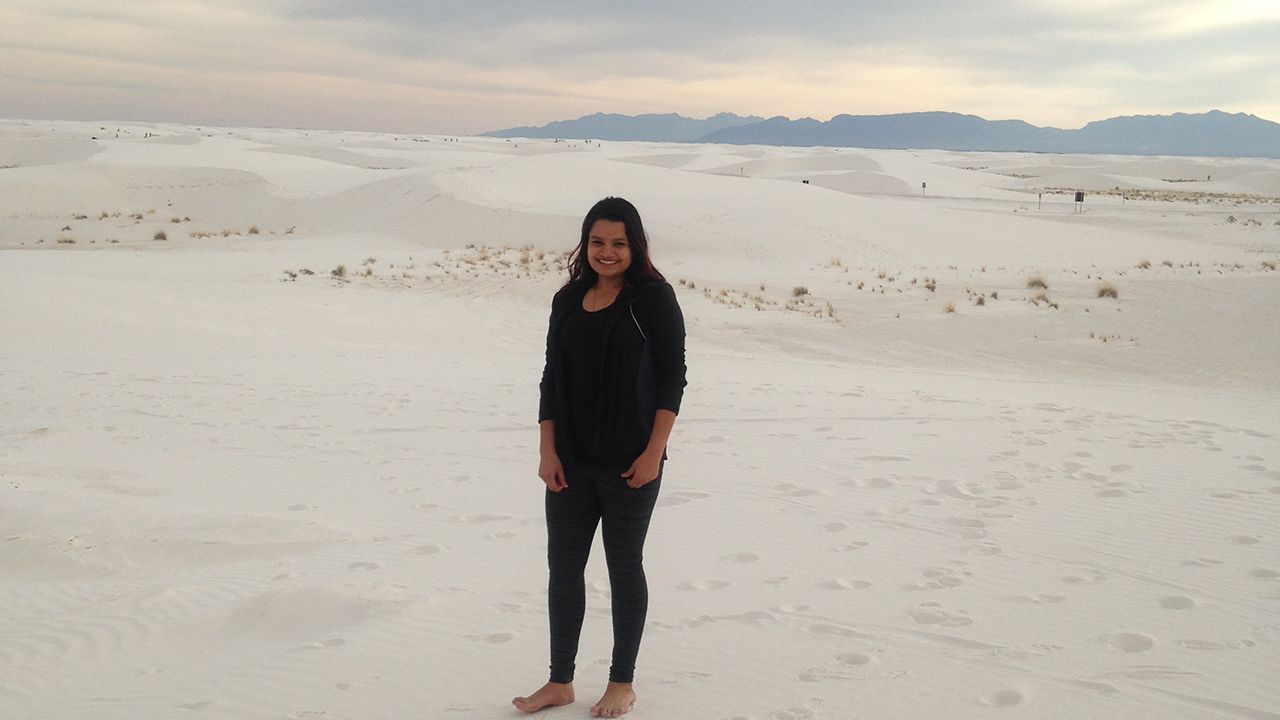 UNM graduate student in the Department of Physics & Astronomy. 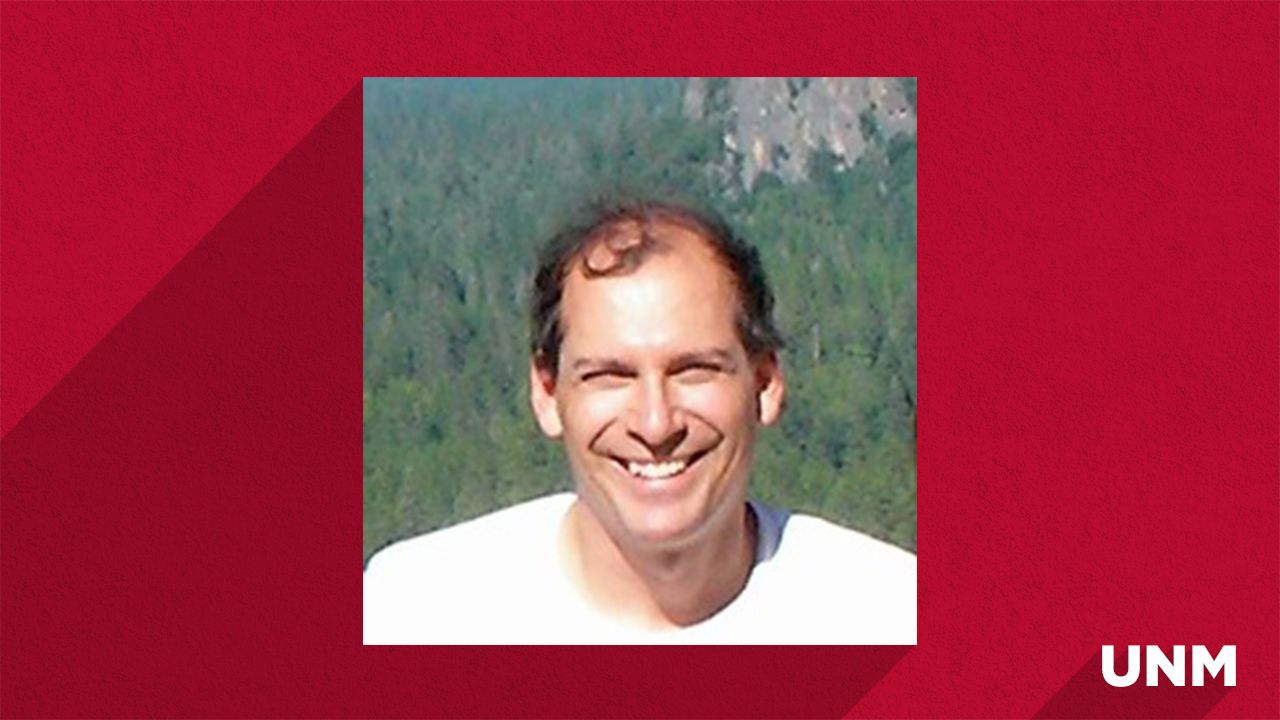 For the first time ever, astronomers at The University of New Mexico say they’ve been able to observe and measure the orbital motion between two supermassive black holes hundreds of millions of light years from Earth – a discovery more than a decade in the making.

UNM Department of Physics & Astronomy graduate student Karishma Bansal is the first-author on the paper, ‘Constraining the Orbit of the Supermassive Black Hole Binary 0402+379’, recently published in The Astrophysical Journal. She, along with UNM Professor Greg Taylor and colleagues at Stanford, the U.S. Naval Observatory and the Gemini Observatory, have been studying the interaction between these black holes for 12 years.

“For a long time, we’ve been looking into space to try and find a pair of these supermassive black holes orbiting as a result of two galaxies merging,” said Taylor. “Even though we’ve theorized that this should be happening, nobody had ever seen it until now.”

In early 2016, an international team of researchers, including a UNM alumnus, working on the LIGO project detected the existence of gravitational waves, confirming Albert Einstein’s 100-year-old prediction and astonishing the scientific community. These gravitational waves were the result two stellar mass black holes (~30 solar mass) colliding in space within the Hubble time. Now, thanks to this latest research, scientists will be able to start to understand what leads up to the merger of supermassive black holes that creates ripples in the fabric of space-time and begin to learn more about the evolution of galaxies and the role these black holes play in it.

“Even though we’ve theorized that this should be happening, nobody had ever seen it until now.” – Professor Greg Taylor, UNM Department of Physics & Astronomy

Using the Very Long Baseline Array (VLBA), a system made up of 10 radio telescopes across the U.S. and operated in Socorro, N.M., researchers have been able to observe several frequencies of radio signals emitted by these supermassive black holes (SMBH). Over time, astronomers have essentially been able to plot their trajectory and confirm them as a visual binary system. In other words, they’ve observed these black holes in orbit with one another.

“When Dr. Taylor gave me this data I was at the very beginning of learning how to image and understand it,” said Bansal. “And, as I learned there was data going back to 2003, we plotted it and determined they are orbiting one another. It’s very exciting.”

For Taylor, the discovery is the result of more than 20 years of work and an incredible feat given the precision required to pull off these measurements. At roughly 750 million light years from Earth, the galaxy named 0402+379 and the supermassive black holes within it, are incredibly far away; but are also at the perfect distance from Earth and each other to be observed.

Bansal says these supermassive black holes have a combined mass of 15 billion times that of our sun, or 15 billion solar masses. The unbelievable size of these black holes means their orbital period is around 24,000 years, so while the team has been observing them for over a decade, they’ve yet to see even the slightest curvature in their orbit.

“If you imagine a snail on the recently-discovered Earth-like planet orbiting Proxima Centauri – 4.243 light years away – moving at 1 cm a second, that's the angular motion we're resolving here,” said Roger W. Romani, professor of physics at Stanford University and member of the research team.

“What we’ve been able to do is a true technical achievement over this 12-year period using the VLBA to achieve sufficient resolution and precision in the astrometry to actually see the orbit happening,” said Taylor. “It’s a bit of triumph in technology to have been able to do this.”

While the technical accomplishment of this discovery is truly amazing, Bansal and Taylor say the research could also teach us a lot about the universe, where galaxies come from and where they’re going.

"The orbits of binary stars provided tremendous insights about stars,” said Bob Zavala, an astronomer with the U.S. Naval Observatory. “Now we'll be able to use similar techniques to understand super-massive black holes and the galaxies they reside within."

Continuing to observe the orbit and interaction of these two supermassive black holes could also help us gain a better understanding of what the future of our own galaxy might look like. Right now, the Andromeda galaxy, which also has a SMBH at its center, is on a path to collide with our Milky Way, meaning the event Bansal and Taylor are currently observing, might occur in our galaxy in a few billion years.

“Supermassive black holes have a lot of influence on the stars around them and the growth and evolution of the galaxy,” explained Taylor. “So, understanding more about them and what happens when they merge with one another could be important for our understanding for the universe.”

Bansal says the research team will take another observation of this system in three or four years to confirm the motion and obtain a precise orbit. In the meantime, the team hopes that this discovery will encourage related work from astronomers around the world. 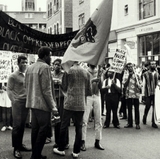 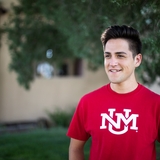 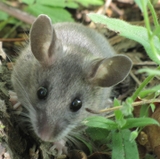