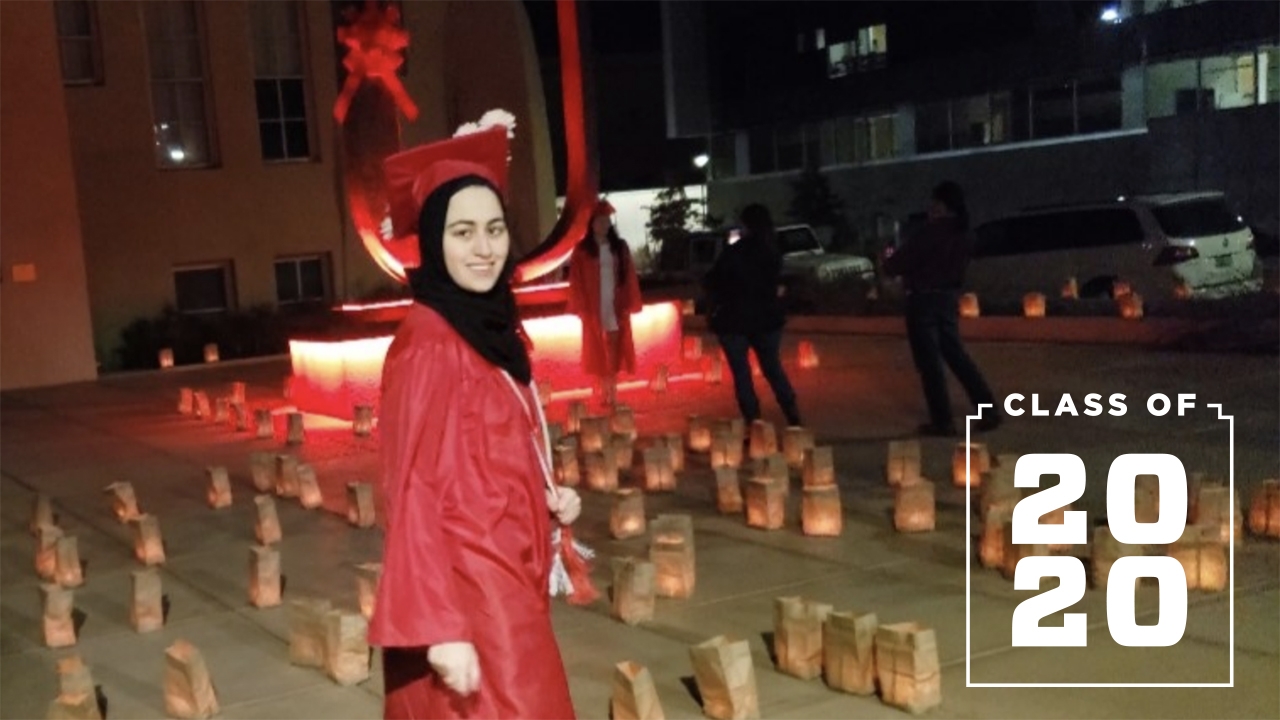 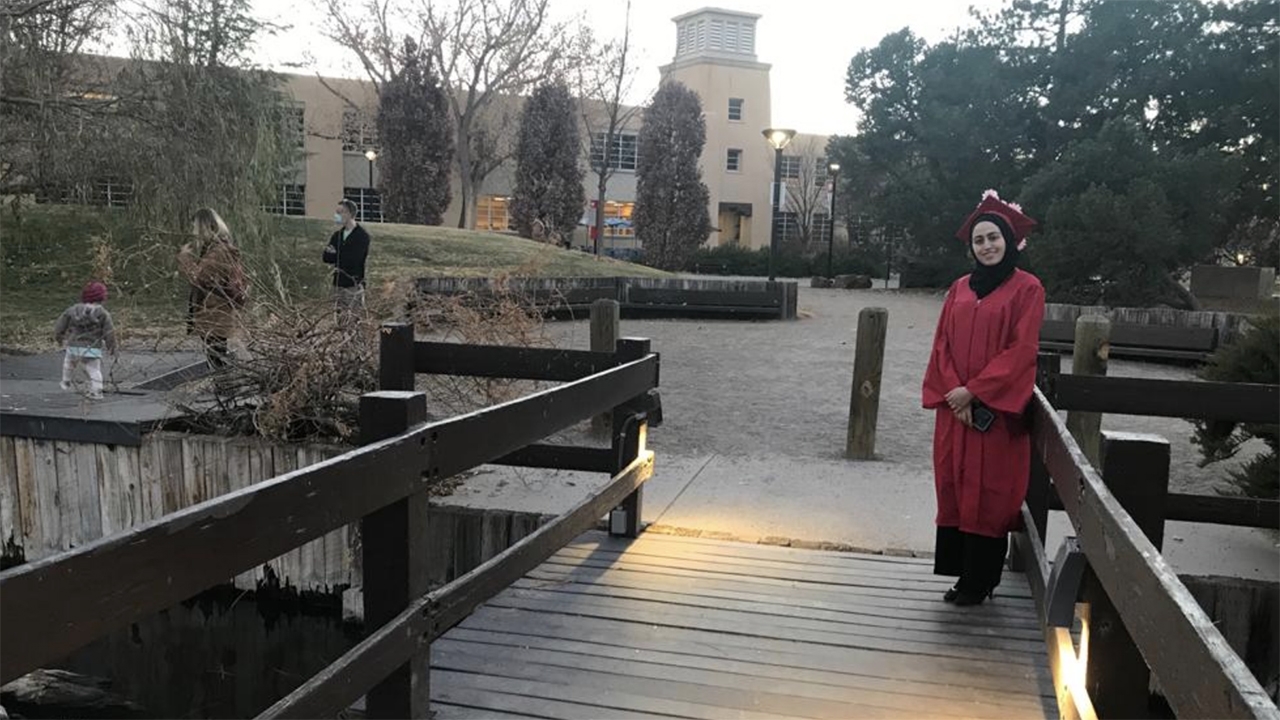 Moving to a new country where you don’t know the language is a difficult endeavor for anyone at any age. For immigrant and now U.S. citizen, Amenah Adi, it’s exactly how she began her journey in America—not knowing much about the English language.

It was December 2014 when Adi, originally from Hama, Syria, came to the United States from Jeddah, Saudi Arabia, a port city on the Red Sea. She was attending college at King Abdul Aziz University when her family decided to move to the United States. Suddenly, she found herself in a new country with people who spoke a strange language. But it was Adi’s passion for learning and her perseverance, traits instilled upon her at an early age by her father Abdulhamid Adi and mother Aisha Al-Najjar that helped her overcome the language barrier to graduate this fall with a Bachelor of Science in Psychology and a minor in communications from The University of New Mexico with an overall GPA of 3.5.

In 1999, Six-year-old Amenah Adi took the first step in her journey.

Adi graduated from school at the age of 17 and was planning to get her bachelor's degree four years later closely followed by her master's and Ph.D. at most at 28 years of age she recalled. Adi began college at King Abdul Aziz University choosing to major in psychology and was in her senior year before her life changed. Her family had moved to a few countries before finally choosing America because of its freedom, cultural, ethnic and religious diversity. They moved to New Mexico because relatives, who were U.S. citizens, lived here, and also because of its diverse nature including mountains, rivers and the four seasons.

“Overall, my performance was excellent, and I studied with all the passion and eagerness,” Adi said. “In my fourth year at King Abdul Aziz University, before the end of the first semester, my family had to move to the U.S. So, suddenly I found myself in a different country with a new language. From here on my story had begun, I started learning the English language, which I found an enormous obstacle for me.”

Fortunately for Adi, she developed a passion for learning from a family that was dedicated and appreciative of knowledge that would be beneficial in her pursuit of a college degree. “All my life, I have loved learning anything and any skills that I had never known before. I entered school as a young child; I was five years old,” Adi said. “I always dreamed of the moment of graduating from school to enter a university. I considered it a very great honor. I wanted to grow up and become a doctor that helped people by terminating their suffering as much as possible.”

Adi remembers the moments of happiness her mother and father shared after they earned their master’s degree. “They supported each other despite their family responsibilities and life challenges they faced because they were immigrants that had left their home country. These visualizations were always in my mind,” she said. “My parents grew love in my heart for reading ever since I was little. They used to take me to the libraries and let me get all the books I wanted. The school gave me certificates for several years because I was one of the students that would visit the library and borrow books frequently. This helped to develop my love for education. Therefore, my passion for learning grows with me year after year. I consider life as a school in which I am its student learning various lessons and experiences with every minute that passes.” 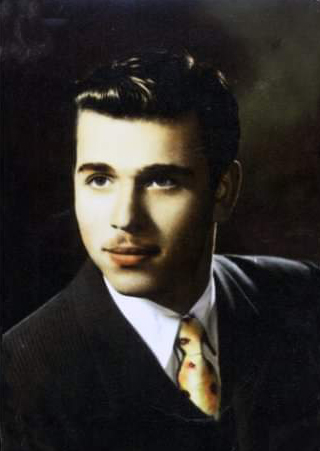 Grandfather, Dr. Salman Al-Najjar, was an inspiration to Adi.

Her mother would tell also tell her stories about the obstacles her grandfather, a famous doctor in the city of Hama, Syria, overcame. He suffered from multiple sclerosis after graduating from the best school of medicine in Syria, Damascus University. He became a general practitioner and despite the circumstances of his illness, continued studying and earned multiple specialties including general surgery, heart and internal medicine and wanted to earn a third (pediatric specialty), but passed away. “Nothing was able to separate him from learning other than dying,” said Adi. “‘I want to overcome the disease and I will not let the disease to overcome me,’ was a phrase by him that helped him challenge the illness.”

While the challenge of moving to a new country and learning about a new way of life, fitting in and feeling welcomed is tough enough, it’s even tougher when you don’t speak the language and can’t understand what people are saying. And if you’re shy, as Adi admits, the challenges and experiences are even harder to overcome. Although, deep inside, there was an insistence that pushed Adi to continue her dream. She got accepted to UNM and started by taking one class a semester. Later on, she began taking more classes a semester, but was so slow.

“I would not even practice communicating with people because I was afraid of making a mistake,” said Adi. “Especially since my personality contains a character trait of shyness, one of the difficulties I have trouble overcoming is standing up for a presentation in the English language to my classmates. I overcame this problem after continuously practicing. Sometimes, I would record a video just to evaluate the mistakes I made.

“The hardest parts about learning a new language are the struggle to understand the different accents of the professors and students, in addition to the academic language difficulty. I would try to overcome these difficulties by constantly translating new words.”

She often felt very frustrated and hopeless and recalled the first time she attended her biology lab where she came to tears because she was so lost.

“At first, I felt completely helpless, which made me burst into tears in front of the professor and the students. I had this reaction because I felt that this class was very challenging and I would have to drop out of it,” Adi said. “I was given moral support by my instructor and my classmates. They made me feel better, more courageous, and work hard. I was able to pass it with an “A” in that class, and really, I appreciate their support as I look back. There is no doubt that I felt weak in many moments, but that feeling was temporary because determination and insistence terminated this feeling.” 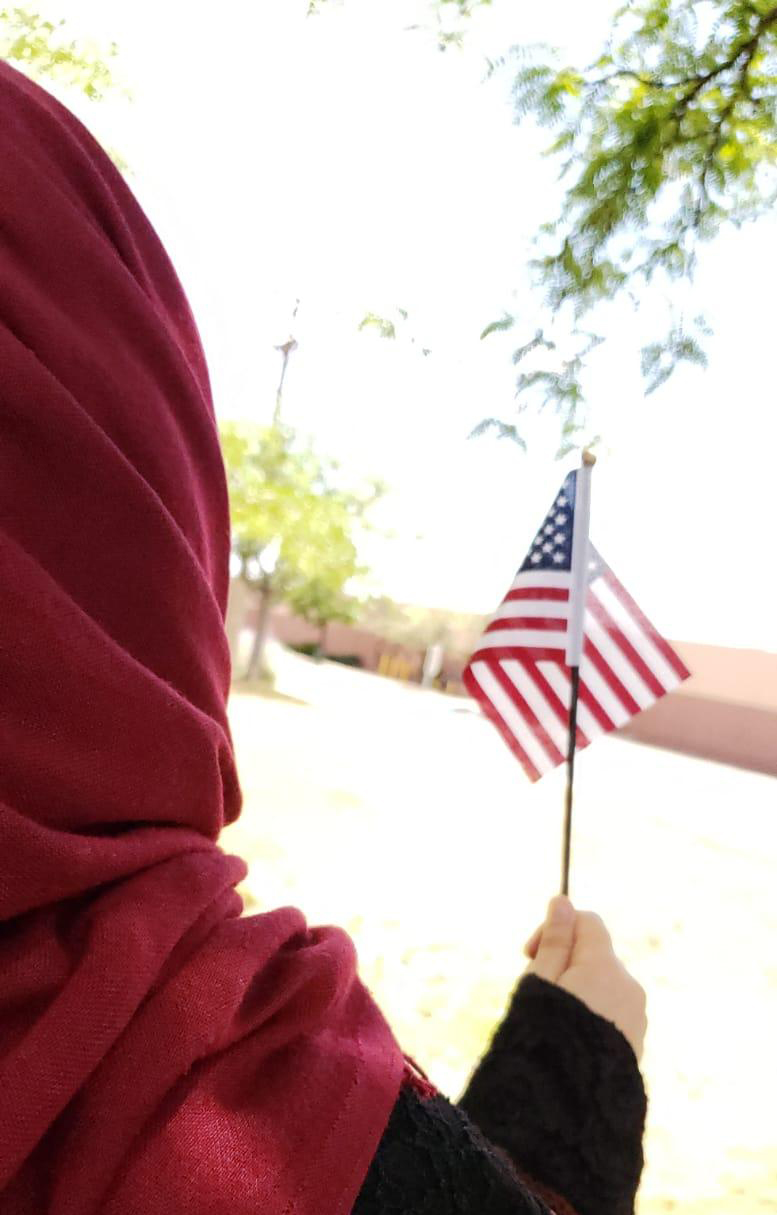 Amenah Adi is a proud American.

Regardless of the obstacles she faced, the constant support from Adi’s family to always believe in herself and to terminate the phrase ‘I can't’ from her vocabulary provided her with the strength to continue her educational journey.

“My family never stopped believing in me and always encouraged me to continue to this moment after years of this educational journey, packed with adventures. I learned from this experience to believe in myself and to terminate the phrase “I can't” from my vocabulary. I learned that education has no age, and what’s significant is to walk on the path, no matter how long it takes, as long as it’s the right path. Every person is a superhero in their own journey. The motto that I follow that I have come up for myself is: ‘No matter how much time I take, all that matters is that I succeed.’”

Today Adi, who has also become a U.S. citizen since her journey in America began, is proud to have completed the first step in her education. She plans to continue with her postgraduate studies until she achieves her goal of becoming a psychotherapist to help people get inner peace, good mental health and support.

“Now, at this moment, I offer up a high feeling of love, gratitude, and thanks to God Almighty for all his great blessings in my life,” said Adi. “Also, I will not forget to express my love and gratitude to my family, friends, and my new country the U.S, as well for giving me this great chance.”