Human-induced climate change is causing dangerous and widespread disruption in nature and affecting the lives of billions of people around the world, despite efforts to reduce the risks according to the latest Intergovernmental Panel on Climate Change Working Group II report, Climate Change 2022: Impacts, Adaptation and Vulnerability, released this week in Berlin, Germany.

The world faces unavoidable multiple climate hazards over the next two decades with global warming of 1.5°C (2.7°F). Even temporarily exceeding this warming level will result in additional severe impacts, some of which will be irreversible. Risks for society will increase, including to infrastructure and low-lying coastal settlements. People and ecosystems least able to cope are being hardest hit says the report. 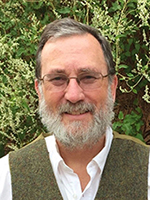 “The new IPCC assessment describes a huge set of documented impacts of climate change, affecting people and ecosystems everywhere on the planet,” said University of New Mexico climatologist and Professor Emeritus David Gutzler, who helped author the massive 3,675-page report that included 270 authors from 67 countries. “As climate continues to change, impacts are projected to become more severe with every tenth of a degree of additional global warming.

“The report describes many examples of adaptation measures that can limit these impacts, such as building coastal walls to adapt to rising sea level. But overall, we find that current adaptation policies are not keeping up with the increased risks associated with the changing climate.”

Local and Regional Impacts
The report includes various impacts which Gutzler said are going to affect New Mexicans including drought and in turn wildfire. In recent years, drought has been no stranger to New Mexico while water is another area where New Mexicans have been and will continue to be affected. In the summer of 2020, 90 percent of the west, including Arizona, Colorado, Nevada, New Mexico and Wyoming were in severe drought. Those states are all still experiencing varying levels of drought including hard-hit New Mexico.

“A general recommendation from the IPCC report is the desperate need for coordination of adaptation measures, but the ways that water is managed in our multi-state border region create huge challenges for collaborative adaptation to diminishing water supplies.”

Wildfire has also had significant impacts over the past decade. According to U.S. wildfire statistics released by the Congressional Research Service over the decade from 2011 to 2020, there were an average of 62,805 wildfires and scorching an average of 7.5 million acres annually. In 2020 alone, 58,950 wildfires burned 10.1 million acres, the second-most acreage impacted in a year.

“Some of these impacts sound very familiar to people in New Mexico who have experienced rapid warming in recent decades,” said Gutzler. “For example, we can confidently attribute a large part of the increased area across western North America burned by wildfires in recent years to human-caused climate change. Other continents such as Australia are similarly affected. With another degree of global warming, projections suggest that wildfire-burned area will increase globally by another one-third.”

Urgent action required to deal with increasing risks
Increased heatwaves, droughts and floods are already exceeding plants’ and animals’ tolerance thresholds, driving mass mortalities in species such as trees and corals. These weather extremes are occurring simultaneously, causing cascading impacts that are increasingly difficult to manage. They have exposed millions of people to acute food and water insecurity, especially in Africa, Asia, Central and South America, on Small Islands and in the Arctic.

To avoid mounting loss of life, biodiversity and infrastructure, ambitious, accelerated action is required to adapt to climate change, at the same time as making rapid, deep cuts in greenhouse gas emissions. So far, progress on adaptation is uneven and there are increasing gaps between action taken and what is needed to deal with the increasing risks, the new report finds. These gaps are largest among lower-income populations.

Safeguarding and strengthening nature is key to securing a liveable future
There are options to adapt to a changing climate. This report provides new insights into nature’s potential not only to reduce climate risks but also to improve people's lives. Scientists point out that climate change interacts with global trends such as unsustainable use of natural resources, growing urbanization, social inequalities, losses and damages from extreme events and a pandemic, jeopardizing future development.

This report also provides a detailed assessment of climate change impacts, risks and adaptation in cities, where more than half the world’s population lives. People’s health, lives and livelihoods, as well as property and critical infrastructure, including energy and transportation systems, are being increasingly adversely affected by hazards from heatwaves, storms, drought and flooding as well as slow-onset changes, including sea-level rise.

There is increasing evidence of adaptation that has caused unintended consequences, for example destroying nature, putting peoples’ lives at risk or increasing greenhouse gas emissions. This can be avoided by involving everyone in planning, attention to equity and justice, and drawing on Indigenous and local knowledge.

“This report is a dire warning about the consequences of inaction,” said Hoesung Lee, chair of the IPCC. “It shows that climate change is a grave and mounting threat to our wellbeing and a healthy planet. Our actions today will shape how people adapt and nature responds to increasing climate risks.”

The Working Group II report is the second installment of the IPCC’s Sixth Assessment Report (AR6), which will be completed this year.

“This report recognizes the interdependence of climate, biodiversity and people and integrates natural, social and economic sciences more strongly than earlier IPCC assessments,” said Lee. “It emphasizes the urgency of immediate and more ambitious action to address climate risks. Half measures are no longer an option.”