As the COVID-19 virus continues to spread around the globe, studying aerosol and droplet transport within different environments can help establish effective, physics-informed measures for virus mitigation. One of the most important environments to gain a rapid understanding about COVID-19's spread is inside the school classroom.

Flow velocity distribution and particle size are key in aerosol transport, which is one of the main ways COVID-19 spreads, when aerosol particles are released during exhalation, talking, coughing, or sneezing.

In Physics of Fluids, from AIP Publishing, University of New Mexico researchers used computational fluid-particle dynamics to explore aerosol transport within an air-conditioned classroom model. They discovered opening windows increases the fraction of particles that exit the system by nearly 40 percent, while also reducing aerosol transmission between people within.

"Nearly 70 percent of exhaled 1-micron particles exit the system when windows are open," said Khaled Talaat, a research assistant in the Department of Nuclear Engineering at the UNM School of Engineering and one of the authors. "And air conditioning removes up to 50 percent of particles released during exhalation and talking, but the rest get deposited onto surfaces within the room and may reenter the air."

Particles are transmitted in significant quantities (up to 1 percent of exhaled particles) between students -- even at 2.4 meters (7.8 feet) of separation distance because of airflow. 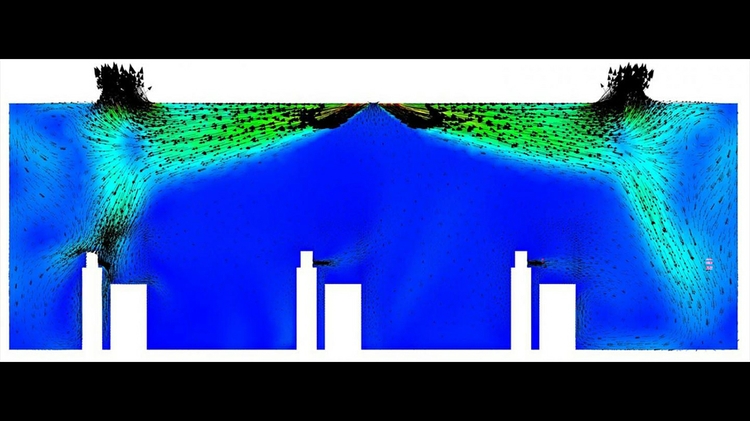 Distribution of the velocity vectors through the middle of the classroom. Airflow within the room is driven by the air conditioning system. Image credit: Khaled Talaat

The researchers were surprised to find that glass droplet screens placed in front of desks significantly reduced the transmission of 1-micron particles from one student to another, according to Talaat.

"Screens don't stop 1-micron particles directly, but they affect the local airflow field near the source, which changes the particle trajectories," he said. "Their effectiveness depends on the position of the source with respect to the air conditioning diffusers."

For school reopenings, the group recommends keeping windows open when possible and installing glass screens in front of desks. Students at higher risk of COVID-19 complications can be seated where they are exposed to fewer particles, which will depend on the air conditioning layout within the room.

"In our model, the back corners are the safest spots," Talaat said.

The group stresses the importance of sanitizing hands -- even without contact with other people's belongings -- because "particles can be transmitted from one student to other students' desks or clothes, etc., even when keeping separated by a distance of 2.4 meters," he said.

Their work also highlights the importance of effective filtration and sterilization systems within air conditioners.

"Given the significance of air conditioning, there is potential for optimization of HVAC systems within classrooms to maximize particle removal, while providing adequate ventilation," Talaat said.