Andres Lazo is a proud graduate of the University of New Mexico. As an Army veteran who suffered physical and mental wounds while serving in Iraq, he has a reason to be proud that he earned a bachelor’s in business administration from the Anderson School of Management in 2013. He was immediately accepted into the master’s in public administration program at Syracuse University and completed that degree in May.

He credits the UNM Veterans Resource Center for helping him every step of the way. Marilyn Dykman, director of the VRC, speaks of Lazo’s own resolve that helped him finish his education: “Andres possesses strength, perseverance and commitment to ‘Complete the Mission,’ which was to graduate and go to graduate school, no matter the obstacles.”

Then something else happened that changed the course of his life. His mother Virginia was diagnosed with cancer. Lazo decided to go to UNM to be close to his mother, who went through a lot. “She is an amazing woman. She is the toughest and most resilient person I know,” he said.

Lazo followed in his family’s footsteps. His father, Máximo Lazo, earned a Ph.D. in nuclear engineering, and his mother is also an alumna. 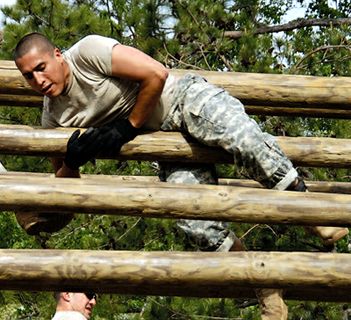 Andres Lazo in training on the obstacle course in preparation for the Best Ranger Competition.

Lazo Enlists
In 2004, Lazo enlisted in the Army. “I needed lots of growing up and the military provided it,” he said. Lazo wanted to be an Airborne Ranger. He completed infantry training and Ranger school. “Ranger school is 62 days long. It took me six months to complete,” he said. The difficulties he had didn’t defeat him, however, because much later, in 2009, he competed in the Best Ranger Competition. “It was exhausting,” was all he had to say about that.

He was deployed to Iraq in 2006 and 2007. Then, on the night of October 21, 2007, while in a convoy after finishing a mission, there was a loud boom. “We were hit by a bomb – an EFP [explosively formed projectile]. EFPs are the most lethal bomb used against U.S. forces in Iraq. They can cut through a Humvee or a tank like a hot knife through butter. I was hit on the right side of my head. My helmet saved my life. I had shrapnel in my hands, body and neck,” he said. The impact destroyed the truck he was in, riding behind a machine gun. Lazo was the only one hurt in the attack.

He was evac’d to the forward operating base, but was able to return to his unit. “I finished my tour on 11/11/07, Veterans Day,” he said. He returned stateside: “I could train others rather than deploy again.” He completed his service on August 15, 2009.

The UNM Veterans Resource Center
He was still active service military when he contacted the VRC in the spring of 2009. “I wanted to reach out to UNM to transition from the military to a fulltime college student. I couldn’t have transitioned without it,” Lazo said.

He was one of the first students to receive the Post 9/11 GI Bill.  “The VRC helped me process into UNM and get certified under the new GI Bill, all by phone and email,” he said. 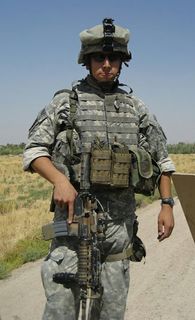 Andres Lazo with all his gear in Iraq. Lazo was deployed to Iraq in 2006.

This time around, Lazo knew he wanted to be a college student. He wanted to study. “It’s not as difficult as the military lifestyle or deploying again,” he said. Lazo progressed through his coursework and did well until his last semester.

Dykman said that he was struggling and isolated himself. “We found out he hadn’t been going to class,” she said. He worked with the Accessibility Resource Center to get the assistance he needed; and with Lee St. Pierre, from the VRC, to determine which classes he absolutely needed to graduate.

“He went from not thinking he would finish, to graduating, getting accepted at Anderson School of Management for graduate school and then getting a scholarship to go to Syracuse,” Dykman said.

She added that during that time, Lazo had his own way of checking in with her. “He would call and say, ‘Guardian 1-8, checking in,’” she said. That was her pilot call sign in the Coast Guard. It connected them over a shared military service.

“I feel lucky. I survived a terrorist attack in 2007. I came back home and made it as a fulltime college student, and graduated because of the VRC,” Lazo said, adding that VRC staff is tapped into all the services veterans need. And they serve families of vets, as well.

“It is important to have the VRC as a place to connect for successful reintegration. Vets are multipliers for good – they are active students who speak out. They value their education and that makes them hard workers.”

Dykman added, “I want veterans to know that I do not focus on their adversities, because it is their strength and perseverance that makes them heroes in my eyes.”

From his experience, Lazo encourages other vets. “Military veterans can overcome challenges and graduate.”

A National Conversation on Service