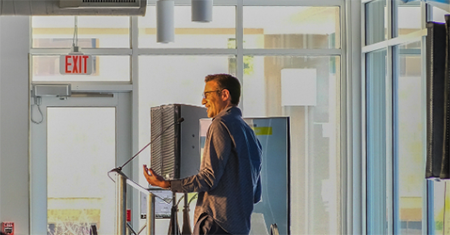 It’s been five years since the Lobo Rainforest Building was first developed on the Innovate ABQ site downtown. It started as a vision to create a highly connected community where people can live, work, and play. Today it is home to UNM Rainforest Innovations, UNM’s Innovation Academy, Sandia National Labs’ tech engagement office, and General Atomics. The top five floors are also home to 310 UNM student living spaces, which is fully occupied this year. The building’s name was intended to reflect the concept of a rainforest – a human ecosystem that allows for creativity, business acumen, scientific discovery, investment capital and more to propagate and nurture budding ideas into sustainable enterprises.

Recently, UNM Rainforest Innovations has begun working with Kadlubek, co-founder of the creative development group Spatial Activations and co-founder and former CEO of Meow Wolf. His team has developed a budding new idea to turn the old Baptist Church, sitting vacant on the Innovate ABQ site, into a hub for creative collaboration. They call it The Jungle and it would serve as a central gathering space where people could work on new projects, form connections within the local entrepreneurial community, support local talent performing at the event space, or meet friends at the food hall or rooftop bar.

A strong innovation ecosystem gains tremendous value from the diverse community it attracts. As Kadlubek puts it, there’s an energetic momentum that builds from these creative hubs that can’t be found anywhere else. Whether it be college students, experienced business leaders, researchers, or high school students, there will be something for everyone at The Jungle.

What is the metaverse?

Nobody knows yet because it’s still being built and it’s too early to define what it means.

But it’s essentially cyberspace 2.0 — the next generation of how we interact with technology. Even though it’s speculative to describe where the technology will take us, it’s easy to imagine more interaction with virtual worlds, better gaming experiences and digital economies where users can create, buy and sell assets.

Even though products and experiences will exist, most likely, in a digital sphere, they need to be created somewhere in the bricks-and-mortar “real world.”

To that end, Rainforest Innovations, which manages all of The University of New Mexico’s technology transfer and economic development initiatives, wants to create an incubator to seed innovation in the creative industries that will contribute to the metaverse. 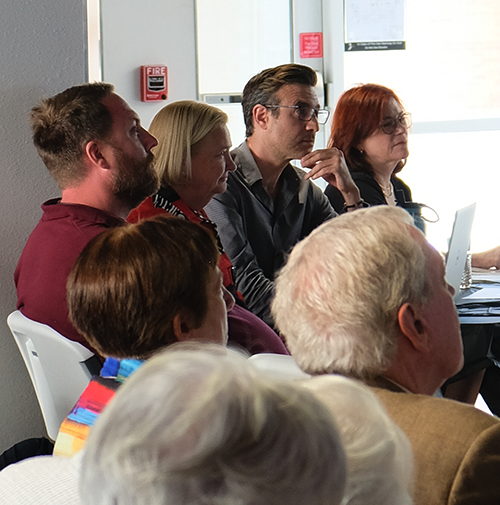 Dubbed “The Jungle,” the multi-faceted incubator space would be a central gathering and collaboration space where people come together to create new, innovative products and services they can test, demonstrate and display through mixed and virtual-reality platforms. That could include everything from film, music and social media to game-engine development, advanced web technologies and even transformational therapies that combine breakthroughs in robotics and medicine to treat both mental illness and physical disabilities.

It’s the next phase of development at Innovate ABQ — the seven-acre site that UNM acquired in 2014 to build a bustling research and development zone for innovation and entrepreneurship in the heart of Albuquerque.

The old First Baptist Church sanctuary and office tower at Broadway and Central Downtown could become the home of The Jungle, provided it can be outfitted for high-tech functionality.

It’s an ideal venue because the church facilities are already within the Innovate ABQ campus footprint; plus the sanctuary could provide space for large gatherings, presentations and performances. Rainforest Innovations has tapped Kadlubek to conceptually integrate the immersive arts and entertainment economy with emerging web technologies.

It’s a project with tremendous potential, and we’re optimistic The Jungle could make Albuquerque synonymous with metaverse innovation.