The University of New Mexico Alumni Association recently announced the recipients of its 2013 Lobo, Zia and Inspirational Young Alumnus Awards. The recipients will be honored as part of Homecoming festivities at the Alumni Association’s All University Breakfast Saturday, Sept. 28 at the Hotel Andaluz, 125 Second Street NW. Breakfast will be served at 9 a.m. The public is invited to attend. Tickets are $20 per person; reservations are required. To RSVP and to purchase tickets, visit Homecoming 2013: Howllywood Homecoming or call the Alumni Relations Office at 505-277-5808 (800-258-6866).

“The talents, accomplishments and passions of these recipients are astounding,” said Karen Abraham, executive director of the UNM Alumni Association. “The awards celebrate these amazing people who have made significant contributions to the community and the University in areas ranging from service to research to the arts."

The Zia Award honors outstanding alumni who make their home in New Mexico. The Lobo Award honors an alum dedicated to the betterment of the university or who has garnered exceptional career achievements. The Inspirational Young Alumnus Award, new this year, honors emerging leaders, age 40 or below, in community service or professional achievements.

“We are especially excited to add the Inspirational Young Alumnus Award this year,” said Abraham. “More than 60 percent of our alumni graduated in the past 15 years, so their accomplishments are many and varied.”

Lobo Award
Chris Schueler, ’85 MA
Documentary filmmaker and innovator in social media television, Chris Schueler has created over 100 television programs in the past 20 years that have garnered 21 Emmy Awards. Schueler is president of Christopher Productions which uses social media to generate understanding and community involvement for bettering the lives of young people. Projects worldwide have addressed issues such as teenage drinking, dating and domestic violence, homelessness, HIV-AIDS, suicide and others. At UNM, Schueler has been active in alumni and student-outreach efforts.

Zia Awards
Gig Brummel, ’62 BBA
An arm injury was all that stood between Gig Brummel’s pro baseball career—he’d signed with the former Kansas City Athletes’ affiliate, the Albuquerque Dukes—and his myriad professional and civic contributions to UNM and the Albuquerque community. The Lobo baseball and basketball Letterman went on to make the Albuquerque branch of Morgan Stanley Dean Witter number one in the Southwest for nine years, and one of the top 10 nationwide. Since retiring, Brummel has applied his financial skills and management experience to numerous boards, including the UNM Alumni Lettermen’s Association, UNM Alumni Association, Sandia Foundation, Archdiocese of Santa Fe Finance Council and Archdiocese Catholic Foundation.

Leslie Hoffman, ‘09 MBA, ’99 BA
Leslie Hoffman began her career as a journalist, but a tour in the Peace Corps in El Salvador swayed her career pursuits toward community development. She worked as a microfinance practitioner and manager with Acción New Mexico * Arizona * Colorado for eight years before beginning her own consulting group, LEH Consulting. She is particularly interested in small for-profit and non-profit businesses. She is a member of the APS Education Foundation Board, on the board of the Hank Trewhitt Alumni Award, and a guest lecturer for the CNM entrepreneurship program and marketing and microfinance undergraduate business courses at UNM Anderson School of Management.

Madeline King, ’02 PharmD
Science classes as a youngster in Gallup, New Mexico, tweaked Madeline King’s interest in becoming a pharmacist. Hard work and family support made it possible for her to graduate from the UNM School of Pharmacy, complete a residency at the VA Medical Center and establish a career working with veterans. Today she is in charge of the residency program at the hospital, overseeing rotations for 30 pharmacy students. Her principal responsibility is in strategic planning for both inpatients and outpatients.

Jay Rosenblum, ’78 BA, ’82 JD
The president and CEO of Sutin, Thayer & Brown law firm, Jay Rosenblum, specializes in business and tax law and has been named one of America’s Best Lawyers and one of Albuquerque’s Best CEOs. Those partial to western swing music might also name him an outstanding bass player, for his participation in the band Curio Cowboys. Known for his pro bono work, Rosenblum serves on numerous boards, including the New Mexico Community Foundation, the New Mexico Economic Development Corporation, and the David Specter Shalom House.

Peter Sanchez, ’84 BBA
After 20 years of a successful out-of-state career in accounting, oil and gas, and technology startups, and after earning a law degree, Peter Sanchez returned to Albuquerque. An heir to the Atrisco Land Grant, Sanchez was appointed CEO of the Atrisco Companies, which include the Atrisco Heritage Foundation, the Rio Grande Educational Collaborative, El Campo Santo, Atrisco Oil and Gas, and Mariachi Spectacular. Extending his passion for growth, cultural awareness and education, Sanchez serves on several boards, including the National Hispanic Cultural Center Foundation and the Hispano Chamber of Commerce.

Frank Sedillo, ’82 BBA, ’87 JD
Metropolitan Court Judge Frank Sedillo’s pursuit of a legal career began in the legislative branch when he served as Aide/Doorkeeper for Senator Pete Domenici and then as Aide to Congressman Manuel Lujan. Now he presides not only in court but as host of “The Advocate,” a City of Albuquerque GOV 16 Television show. His contributions to UNM athletics began with the Lobo football team and have continued with nearly 20 years’ service on the UNM Alumni Lettermen’s Association board of directors. Sedillo is licensed as a coach and official for the New Mexico Activities Association.

Inspirational Young Alumnus Award
Abigail Lanin Eaves, ’00 BSN, ’02 MSN
Among the youngest midwifery graduates of the UNM College of Nursing, Abigail Lanin Eaves opened Albuquerque’s Dar a Luz (to give birth) birth center in 2011. Dar a Luz is the first birth center in Albuquerque since 1985. The non-profit center provides full-scope midwifery services -- including prenatal care, labor, birth, postpartum, and newborn care; well-women care such as Pap/Annual exams; contraception; STI testing and treatment; pre-conception counseling; healthy lifestyle promotion and maintenance; and depression management. Patients pay only according to their ability. Lanin Eaves is also working with the New Mexico Department of Health, Medicaid and the Birth Center Alliance to obtain licensure for other birth centers in the state. 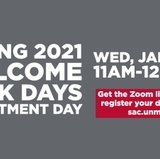