The Quantum Systems Accelerator has been catalyzing the quantum information science (QIS) ecosystem since its foundation in 2020 as a National QIS Research Center. In recognition of the new generation of scientists and engineers preparing to harness the advances in this fast-growing field, QSA continues its series profiling early-career researchers at the center’s partner institutions. Three from the Center for Quantum Information and Control at the University of New Mexico contributed their views and explained how they maximize the deep collaborative opportunities at QSA. 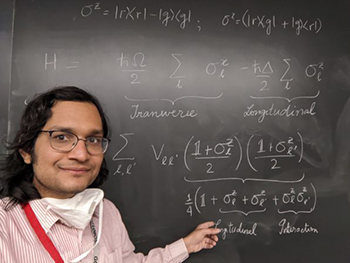 Anupam Mitra
Anupam Mitra is a Ph.D. candidate in Physics at The University of New Mexico and part of the Deutsch Research Group at CQuIC. He focuses on some of the building blocks of neutral atom quantum computers, which involve ultracold atoms cooled to a few micro-Kelvins above absolute zero. Mitra also studies how these ultracold atoms offer the ability to solve quantum problems by simulating model quantum systems. The exponentially large number of variables needed to understand, for example, the properties of matter and energy, make these problems ideal candidates for quantum devices instead of classical computers.

Since middle school, Mitra has been interested in the physics of interference in light waves, and he has also enjoyed building and programming computers. As an undergraduate in Physics and Computer Science at the Birla Institute of Technology and Science in Goa, India, Mitra first learned how quantum phenomena such as superposition, interference, and entanglement can be used for quantum information processing.

What excites you about this growing new field?
"The ability to make intermediate-scale quantum systems has led to discoveries of previously inaccessible phenomena and new ways of understanding other quantum phenomena. More complex quantum systems will help us tackle questions about the nature of space and time, the emergence of classical physics from quantum physics, and the properties of large quantum systems. Moreover, they will allow us to have more precise measurements to investigate principles and phenomena beyond what is currently accessible. I hope the research and development in quantum information processing will help humanity, from potentially finding efficient ways to harness solar energy to improving chemical processes like nitrogen fixation."

How has QSA supported your research journey?
"QSA has a broad community of researchers tackling several problems at the forefront of quantum information science and technology. Regular interactions with the wider community through seminars, panel discussions, and other events have been beneficial for the rapid exchange of ideas among groups and for sharing knowledge regarding solutions to commonly faced problems. I have benefited from these events, as well as from the broader collaborations with QSA researchers. Moreover, the center-wide discussions about common challenges and issues has reduced the duplication of efforts."

Goals
"From a theoretical standpoint, it is easy to imagine ideal quantum systems with well-understood noise and error sources. However, there are always limitations to what contemporary quantum experiments can do, given the complexities introduced by a more extensive quantum system. This reality has been a challenge and a learning experience, so my short-term research goal is to advance quantum information processing with highly excited Rydberg atoms. I also want to finish my doctorate and participate in developing domain-specific robust quantum devices that augment our ability to perform precise measurements, calculate properties of matter, and solve other complex computational problems. Finally, I want to increase diversity, equity, and inclusion in the field, by making it more accessible to underrepresented groups and people whose life circumstances have hindered them from accessing traditional education."

Advice to high-school students
"Broadly speaking, scientific research is a collaborative human effort, so the progress we make today is based on the work of others. While many academic circumstances typically encourage us to work by ourselves, communication and exchanging knowledge are essential in science. One can learn from experts by reading their work and speaking with them. It is also essential to reach out to those who aspire to join our efforts, and especially to include groups who have been disadvantaged.

"Specifically, quantum information science and technology is a rapidly growing field that will benefit from researchers from different backgrounds. At present, many of the discussions use the language of quantum mechanics, which is heavy in linear algebra and calculus; thus, an understanding of these concepts can prepare someone better to be a part of the conversation. Most of the problems we are trying to solve are challenging enough to require contributions from many people, and therefore, we would like as many people to join us as possible." 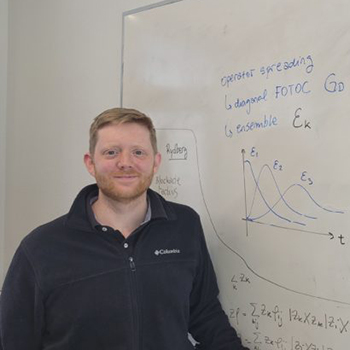 Pablo Poggi
Pablo Poggi is a research assistant professor in Physics and Astronomy at the University of New Mexico specializing in quantum control to counteract and tailor the unwanted noise, environmental effects, and errors in quantum devices. In his theoretical research, he pushes the fundamental limitations of quantum control and studies novel methods to build, run, and benchmark quantum simulation devices.

Poggi was the lead organizer for the CQuIC summer course on quantum chaos for QSA members and the broader QIS community. Quantum chaos examines how complex quantum systems use quantum simulators and how features such as hypersensitivity could hinder reliable quantum information processing. Students and faculty across the United States attended the summer course, engaging in the scientific discussions and the lectures.

Poggi first considered physics a career thanks to a high school teacher in Argentina who encouraged him to study the revolutionary theories of relativity and quantum mechanics. Fascinated with quantum theory after reading a book by Einstein, he learned to love math and its connection with physics at the University of Buenos Aires, where he pursued experimental research in an optics lab while finally choosing theoretical research in quantum control.

What excites you about this growing new field?
"Quantum physics used to be regarded as a set of bizarre rules that governed the strange behavior of the atomic world. For the past decades, it has been recognized that these rules could be seen as a feature rather than a bug, so that quantum states of superposition may be used to solve computational problems more efficiently. I am particularly excited that there is still a lot to learn about the physics of complex quantum systems, especially out of equilibrium. Quantum devices have a tremendous potential to advance knowledge in this area. The notion of quantum chaos, for example, has taken a new shape in the past few years in the field as researchers started to learn the role of entanglement spreading in many quantum systems and its connection to other system properties such as chaos, ergodicity, and thermalization.

"We live in a unique moment where quantum technologies are being developed with significant pushes from theory and experiment in academic settings, national labs, and industry. As a theorist, it is particularly exciting to think that our studies and inquiries about the fundamental capabilities to manipulate quantum systems could lead to enabling new features in industrial applications - or even to understanding why certain things cannot be done and thus why the focus should be targeted in another direction.

How has QSA supported your research journey?
"Being a part of QSA has allowed me to learn about what others are doing and regularly share my work with the community without attending a formal workshop or conference. Many of my collaborators and colleagues here at UNM are part of the QSA, so participating in these collaborative activities is common. It establishes a genuine connection between different groups, potentially leading to more interdisciplinary work.

"Research-wise, we recently finished a QSA project where we studied how a quantum simulator becomes more error-prone in specific types of situations. We discovered that these situations could be explained partly by concepts developed for quantum physics and classical dynamics systems. Making this connection between quantum information and other topics on firm grounds was challenging. It demanded leaving the comfort zone of our expertise to learn about concepts in condensed matter and nonlinear dynamics, so one of the most rewarding aspects of being part of QSA is being able to engage with many colleagues at other institutions and in different ways. QIS is truly an interdisciplinary field, so having done this is a good practice for the future as well."

Goals
"I look forward to taking advantage of all the center-wide knowledge and expertise being developed in a variety of topics and collaborating with people from other institutions to keep up to date and get early access to the most recent developments in QIS."

Advice to high-school students
"It is exciting to get involved in QIS research because quantum technologies are still in development. There is a lot to do, and the tasks are very diverse. For example, there’s research in quantum algorithms and applications of quantum devices, the fundamentals of quantum information processing, and developing the essential tools in the lab to make the quantum devices. Think about what excites you the most and look for mentors to help you get started. But also, don’t be afraid to try different things. It’s typically hard to find a good match on the first try and you will gain more tools to tackle problems in your future research. QIS is interdisciplinary, so being in touch with specialized communities with diverse expertise will always be a plus." 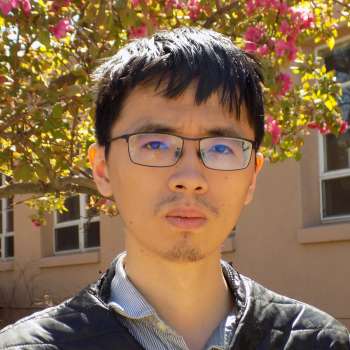 Changhao Yi
Changhao Yi is a graduate student and part of the Crosson Research Group at CQuIC.

What excites about this growing new field?
"I think we are in a stage when the development of theoretical physics slows down. There are two main reasons. First, the systems are too complicated to solve even if we know all the basic principles; second, experimental physics is not developed enough to discover new phenomena. I believe the construction and control of complex quantum systems can be helpful in both aspects, so it's fascinating to combine the different knowledge areas in theoretical physics, math, and computer science to create something new.

"I look forward to the realization of quantum computing and how the concepts in quantum information, like entanglement and complexity, can be helpful in our understanding of condensed matter physics and high energy physics.

How has QSA supported your research journey?
"My experience with QSA has been helpful in my research because I tune in to the QSA science talks frequently. I have also had the chance to meet researchers with similar experiences and interests. This regular communication broadens my horizon and motivates me to progress. The main challenge is learning how to collaborate with other researchers with different backgrounds. For example, I have a physics undergraduate degree. Still, my mentor at UNM has a background in computer science. And I meet researchers at QSA with a diversity of experiences, so sometimes I need to work on projects with many unfamiliar concepts."

Advice to high-school students
"Quantum information science is a research area with vitality. If you are interested in experiments, computer science, math, or theoretical physics, you can find plenty of questions to work on. This community is growing every day. It's the right time to join now."

Founded in 1931 on the belief that the biggest scientific challenges are best addressed by teams, Lawrence Berkeley National Laboratory and its scientists have been recognized with 14 Nobel Prizes. Today, Berkeley Lab researchers develop sustainable energy and environmental solutions, create useful new materials, advance the frontiers of computing, and probe the mysteries of life, matter, and the universe. Scientists from around the world rely on the Lab’s facilities for their own discovery science. Berkeley Lab is a multiprogram national laboratory, managed by the University of California for the U.S. Department of Energy’s Office of Science.

DOE’s Office of Science is the single largest supporter of basic research in the physical sciences in the United States and is working to address some of the most pressing challenges of our time.