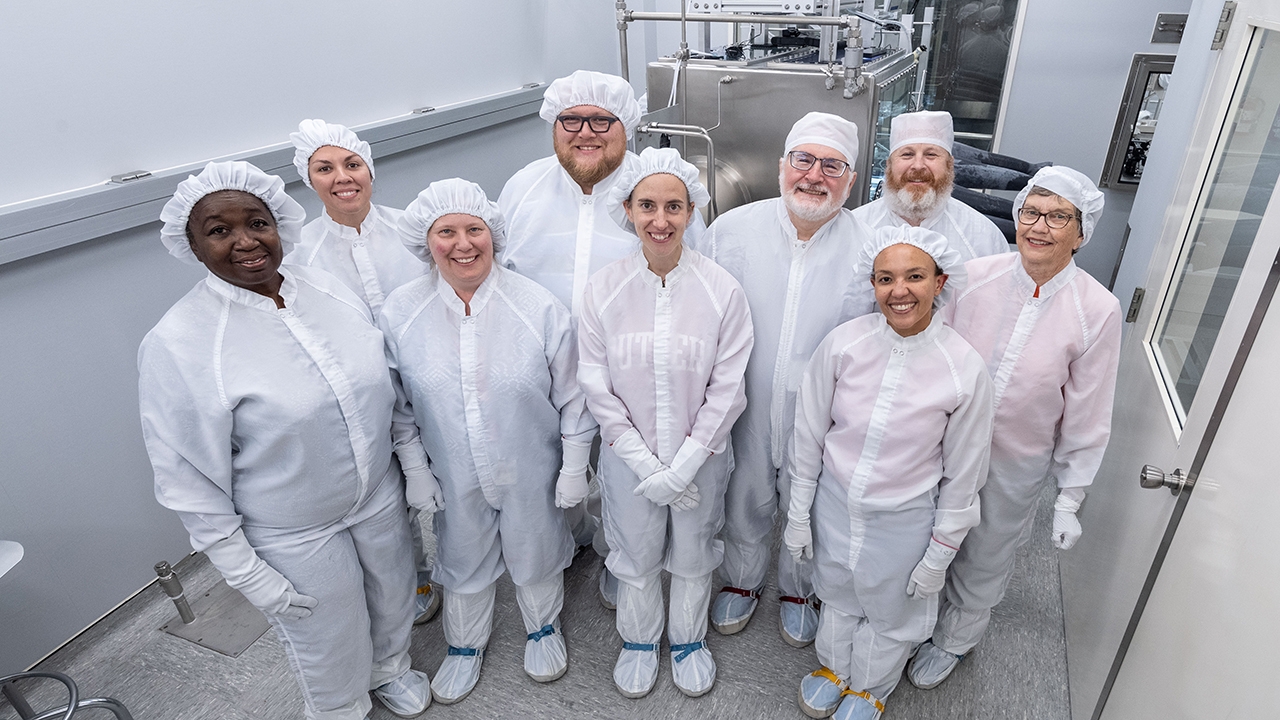 led by UNM's Charles "Chip" Shearer, fourth from right, is leveraging advanced technologies to study Apollo samples using new tools that were not available when the samples were originally returned to Earth. 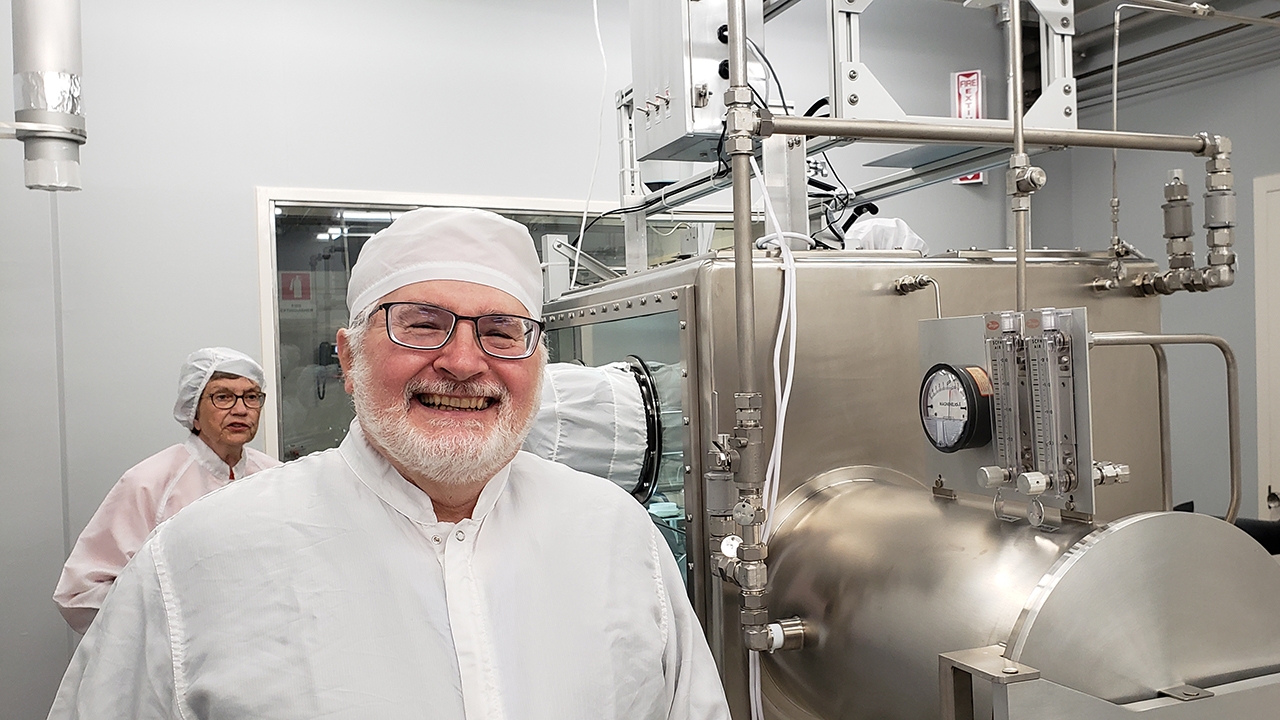 is the science co-lead for ANGSA and research scientist / professor at The University of New Mexico’s Institute of Meteoritics (IOM) and Department of Earth and Planetary Sciences (E&PS). 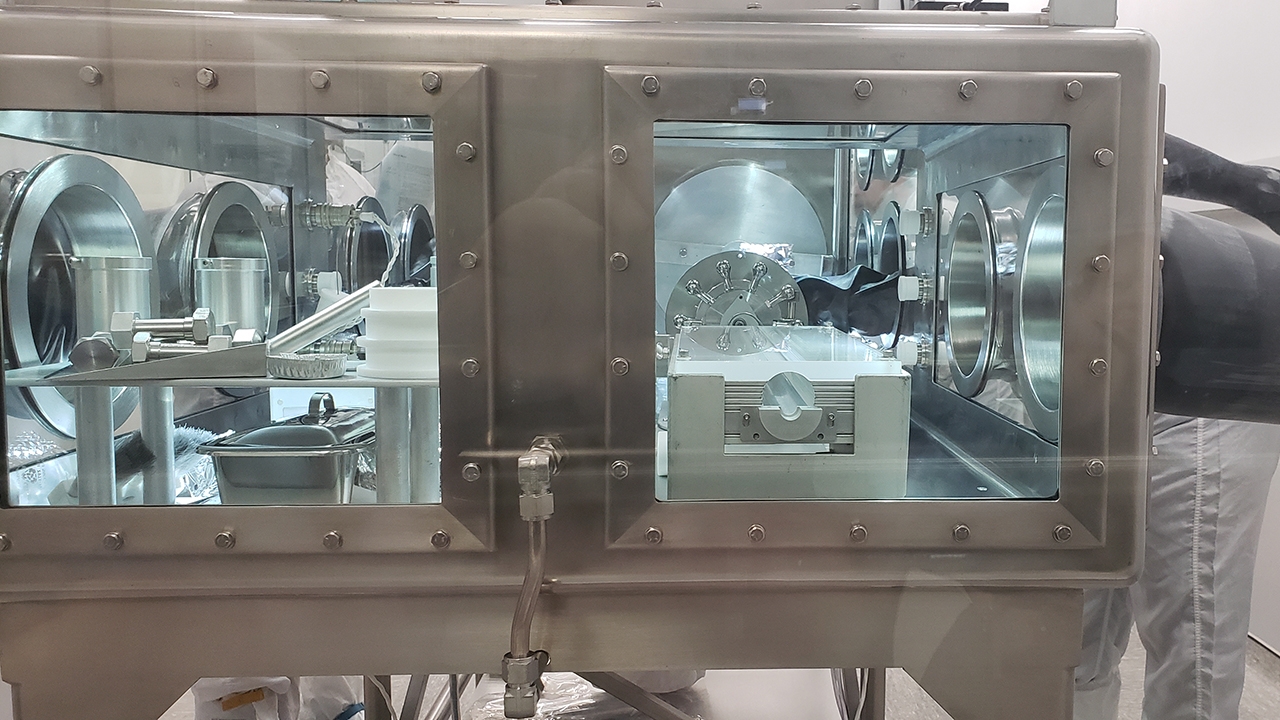 (right) from the Moon returned to Earth on Apollo 17. 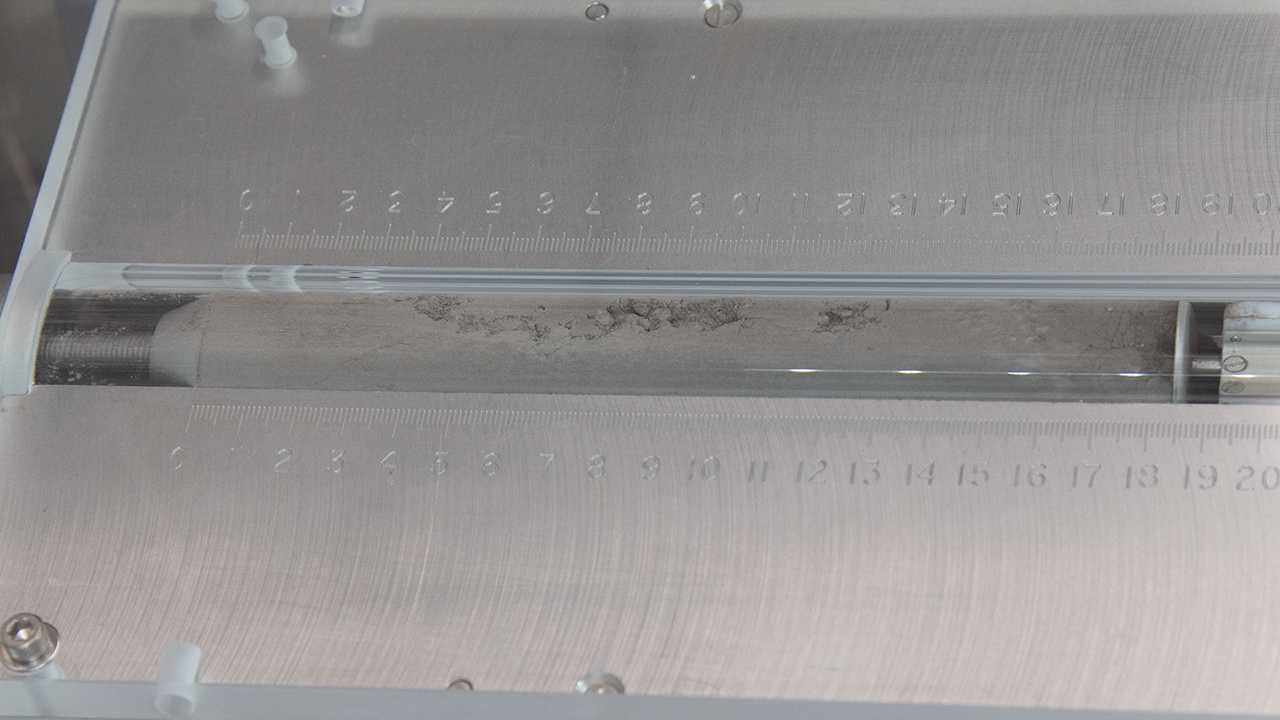 at its Johnson Space Center in Houston. A team of scientists extracted the core from its tube and will soon send samples to other teams across the country to study. 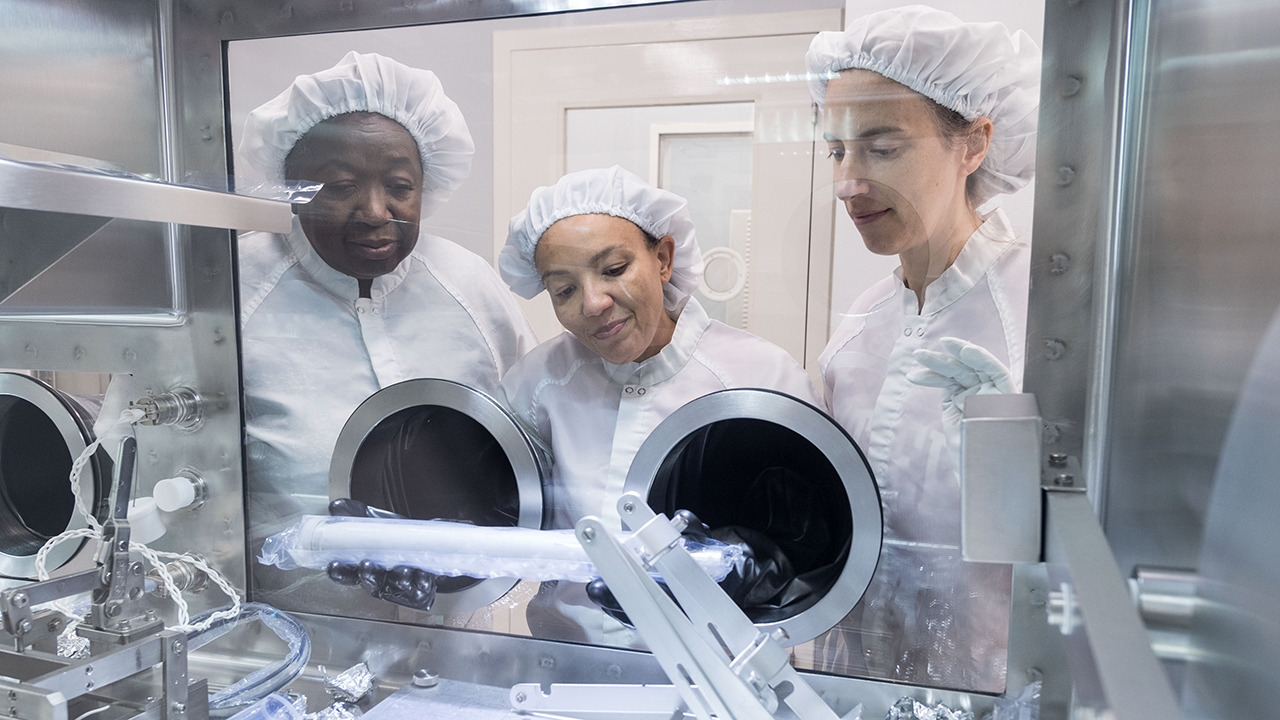 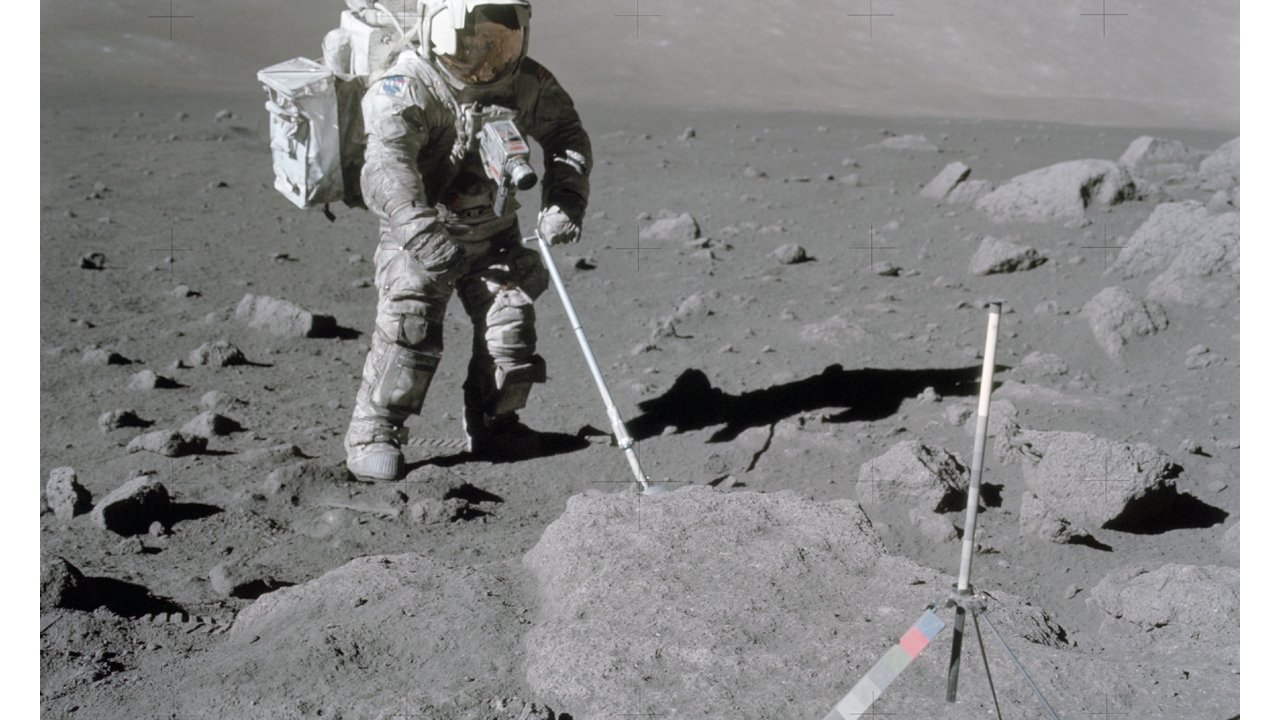 NASA scientists opened an untouched rock and soil sample from the Moon returned to Earth on Apollo 17, marking the first time in more than 40 years a pristine sample of rock and regolith from the Apollo era has been opened. It sets the stage for scientists to practice techniques to study future samples collected on Artemis missions.

The sample, opened Nov. 5, in the Lunar Curation Laboratory at the agency’s Johnson Space Center in Houston, was collected on the Moon by Apollo 17 astronauts Gene Cernan and Harrison “Jack” Schmitt, who drove a 4-centimeter-wide tube into the surface of the Moon to collect it and another sample scheduled to be opened in January. The sample was opened as part of NASA’s Apollo Next-Generation Sample Analysis (ANGSA) initiative, which is leveraging advanced technologies to study Apollo samples using new tools that were not available when the samples were originally returned to Earth.

“We are able to make measurements today that were just not possible during the years of the Apollo program,” said Dr. Sarah Noble, ANGSA program scientist at NASA Headquarters in Washington. “The analysis of these samples will maximize the science return from Apollo, as well as enable a new generation of scientists and curators to refine their techniques and help prepare future explorers for lunar missions anticipated in the 2020s and beyond.”

Since the Apollo era, all samples that were returned to Earth have been carefully stored in the laboratory to preserve them for future generations. Most samples have been well studied, and many are the subject of ongoing research. However, NASA also made the decision to keep some samples completely untouched as an investment in the future, allowing them to be analyzed with more advanced technologies as they are developed. These include samples that remained sealed in their original containers, as well as some stored under special conditions, all intended to be opened and analyzed with more advanced analytical technologies than were available during Apollo.

The unopened Apollo samples were collected on Apollo 15, 16 and 17 missions. Two of those samples, 73002 and 73001, both collected on Apollo 17, will be studied as part of ANGSA. Advances in techniques such as non-destructive 3D imaging, mass spectrometry and ultra-high resolution microtomy will allow for a coordinated study of these samples at an unprecedented scale.

Samples 73002 and 73001 are part of a two-foot long “drive tube” of regolith (rock and soil) that collected from a landslide deposit near Lara Crater at the Apollo 17 site. The samples preserve the vertical layering within the lunar soil, information about landslides on airless bodies like the Moon, and a record of the volatiles trapped within lunar regolith, perhaps even those escaping from the Moon along the Lee-Lincoln Scarp, a fault at the Apollo 17 site.

“Opening these samples now will enable new scientific discoveries about the Moon and will allow a new generation of scientists to refine their techniques to better study future samples returned by Artemis astronauts,” said Francis McCubbin, NASA’s astromaterials curator at Johnson. “Our scientific technologies have vastly improved in the past 50 years and scientists have an opportunity to analyze these samples in ways not previously possible.”

Two Samples, Two Processes
Sample 73002, which has remained unopened but not sealed under vacuum since being brought to Earth, was the first sample to be extruded from its container Nov. 5. Sample processors at Johnson will spend the next several months processing the sample and distributing parts of it to the ANGSA science teams for analysis.

To aid in opening the sample, researchers have used X-ray Computer Tomography (XCT) done at the University of Texas Austin to record a high-resolution 3D image of the regolith within the tube. The imaging aids the processors as they develop strategies to remove the sample for dissection and distribution to research teams, as well as helping scientists understand the sample’s structure before opening the container. It will also protect fragile soil components from damage during opening and processing, and provides detailed images of individual grains and smaller samples known as rocklets.

After X-ray scanning, the samples are removed from their tube using specialized tools inside a glovebox filled with ultrapure dry Nitrogen, and are then subdivided into one-quarter inch segments to allow scientists to understand the variation observed along the length of the core. This is the first time NASA has processed a drive tube like this in over 25 years, and curation scientists have been hard at work over the past few months rehearsing the process.

“I grew up on the stories of Apollo, they inspired me to pursue a career in space and now I have an opportunity to contribute to the studies that are enabling the next missions to the Moon,” said Charis Krysher, the lunar sample processor who will be opening sample 73002. “To be the one to open a sample that hasn’t been opened since it was collected on the moon is such an honor and heavy responsibility, we’re touching history.”

Sample 73001, which will be opened in early 2020, was sealed on the Moon in a special core sample vacuum container and then placed within another vacuum container and sealed on Earth. That sample will be opened once scientists have fine-tuned plans for capturing the gases from the Moon collected in the container along with the sample itself. Once removed, it will be processed in a glovebox and shared with scientific teams selected for the ANGSA research.

Artemis Generation and UNM’s connection
Exploration of the Moon by astronauts in the Artemis program will be enabled by using the resources of the Moon, including water ice that can be used to make rocket fuel or oxygen to breathe. Studying these unopened samples may allow scientists to gain insight into the origin of the lunar polar ice deposits, as well as other potential resources for future exploration. They will also gain a better understanding of how well Apollo tools worked, which will help with tool designs for future lunar missions.

“The findings from these samples will provide NASA new insights into the Moon, including the history of impacts on the lunar surface, how landslides occur on the lunar surface, and how the Moon’s crust has evolved over time,” said Charles "Chip" Shearer, science co-lead for ANGSA and research scientist / professor at The University of New Mexico’s Institute of Meteoritics (IOM) and Department of Earth and Planetary Sciences (E&PS), who has been an advocate of this initiative for more than a decade.

“This research will help NASA better understand how volatile reservoirs develop, evolve and interact on the Moon and other planetary bodies. It’s exciting to have this vision come true,” he added.

Additional members of the UNM team include: James Papike, Steve Simon, Zach Sharp, Michael Cato, Adrian Brearley and Karen Ziegler, all are members of the IOM and E&PS. Schmitt, from Albuquerque, is the lone geologist among the Apollo astronauts and lunar module pilot of Apollo 17, which collected sample 73002. He is actively involved in UNM’s science team.

During the preliminary examination of these unopened Apollo samples, multiple generations of scientists, engineers, and curators will work together to study the samples. Team members, who have long NASA experience and some of whom were part of the original teams to first study Apollo samples, will work with younger team members in a true collaboration between past and present generations of lunar explorers.

“The curation team at the Johnson Space Center was flawless in opening the core sample over a two-day period of time,” said Shearer. “This provides an essential link between the first generation lunar explorers from Apollo and future generations who will explore the Moon and beyond starting with Artemis.”

In approximately 2-3 weeks, UNM will get its first samples that will initially be analyzed in the Center for Stable Isotopes (CSI).

Since these samples were collected, NASA has continued to study Earth’s nearest neighbor through missions like the Lunar Reconnaissance Orbiter and now has an incredible amount of data about the lunar surface, environment and composition. Under Artemis, the agency will send a suite of new science instruments and technology demonstrations to study the Moon ahead of landing astronauts on the lunar surface by 2024, and establishing a sustained presence by 2028.

The next core to be opened will be a bit more difficult as it resides in multiple containers. Shearer and Sharp with team members from other institutions are working on the tools to open and analyze this second container.

The agency will build on its past to leverage its Artemis experience to prepare for the next giant leap – sending astronauts to Mars.