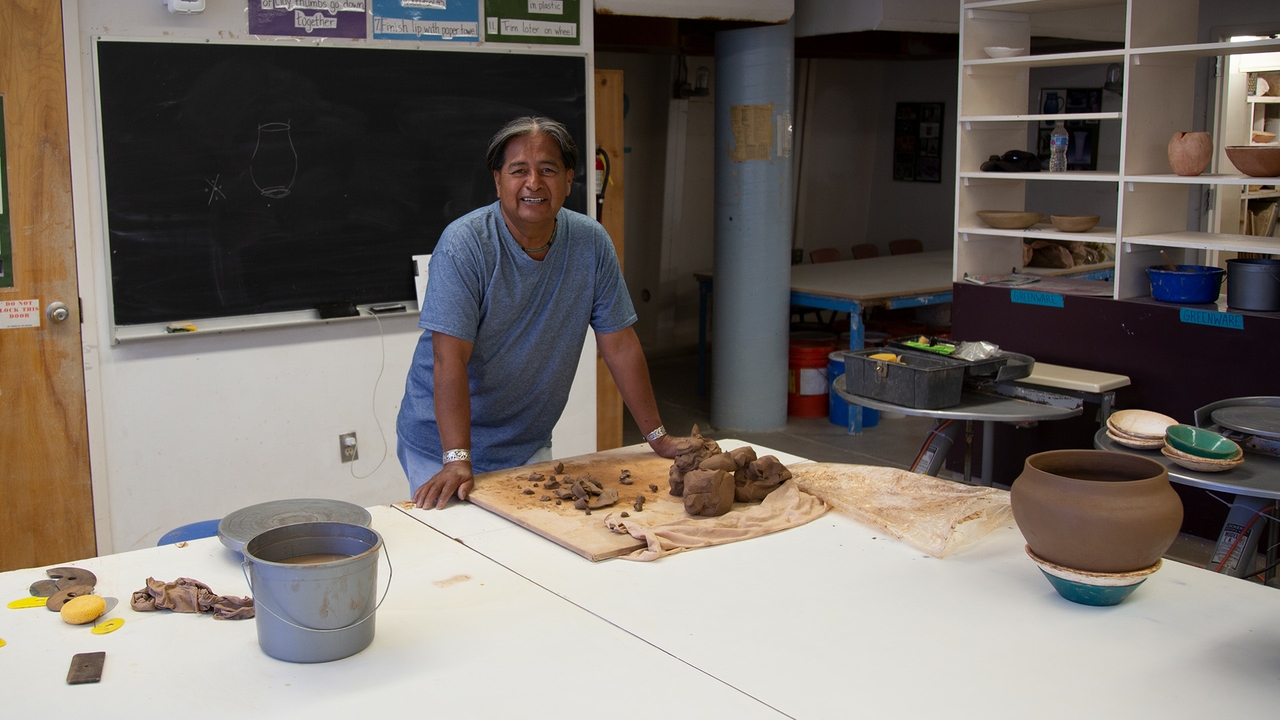 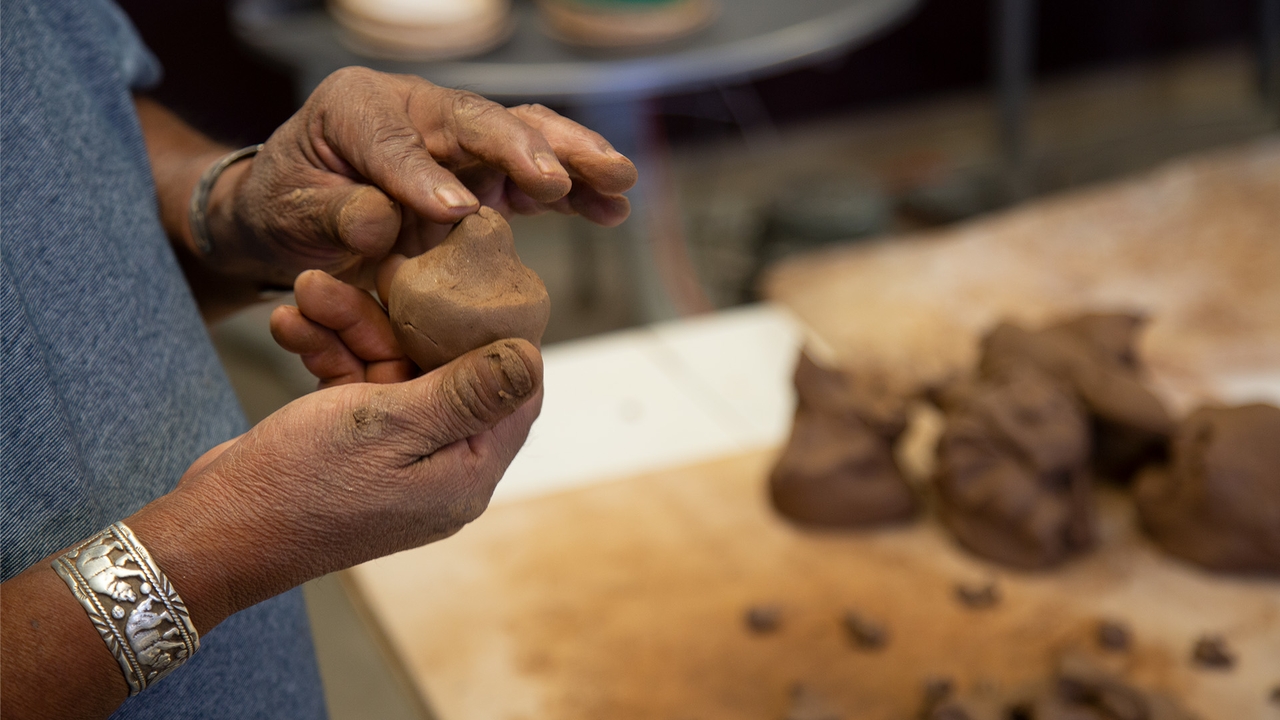 Clarence Cruz shapes a ball of clay into a small pinch pot. 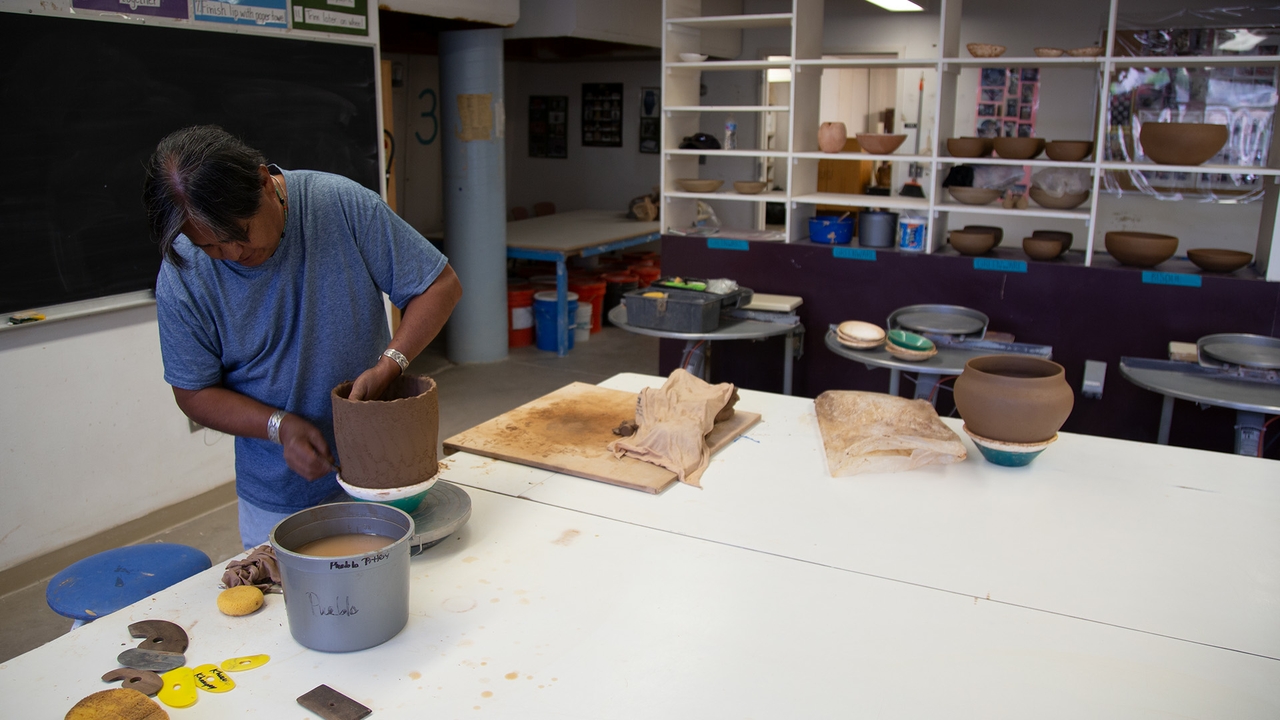 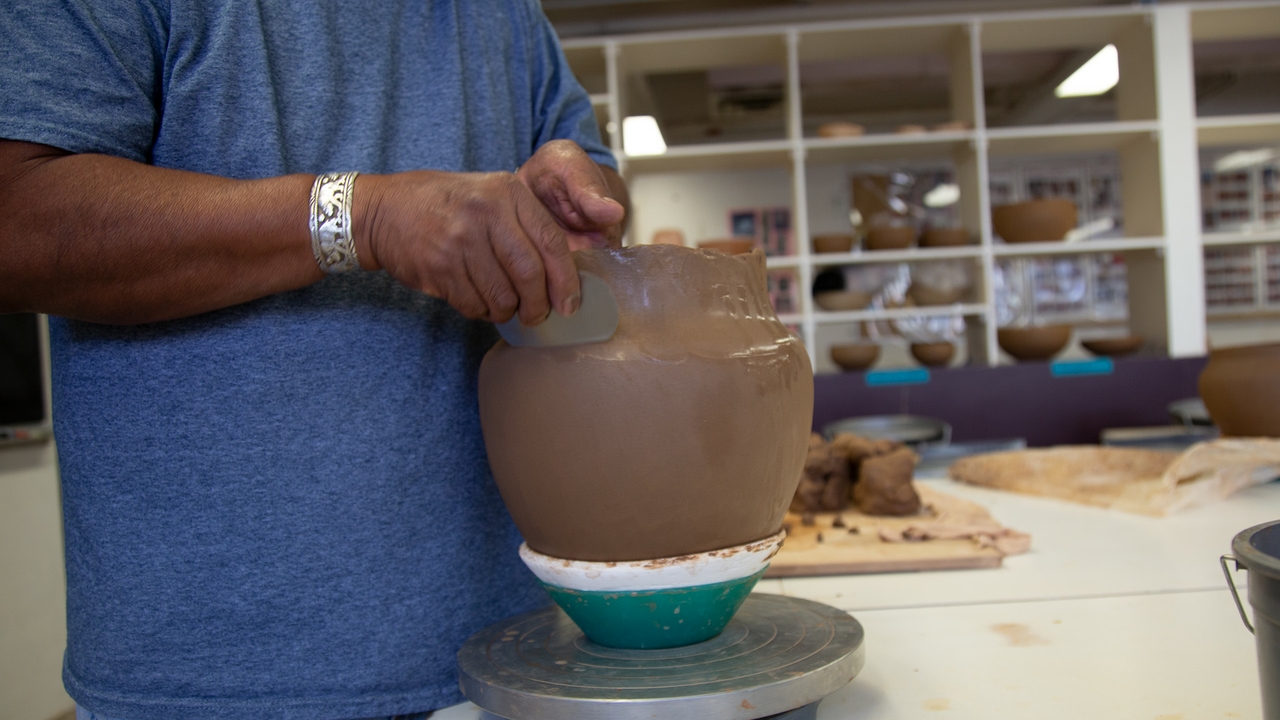 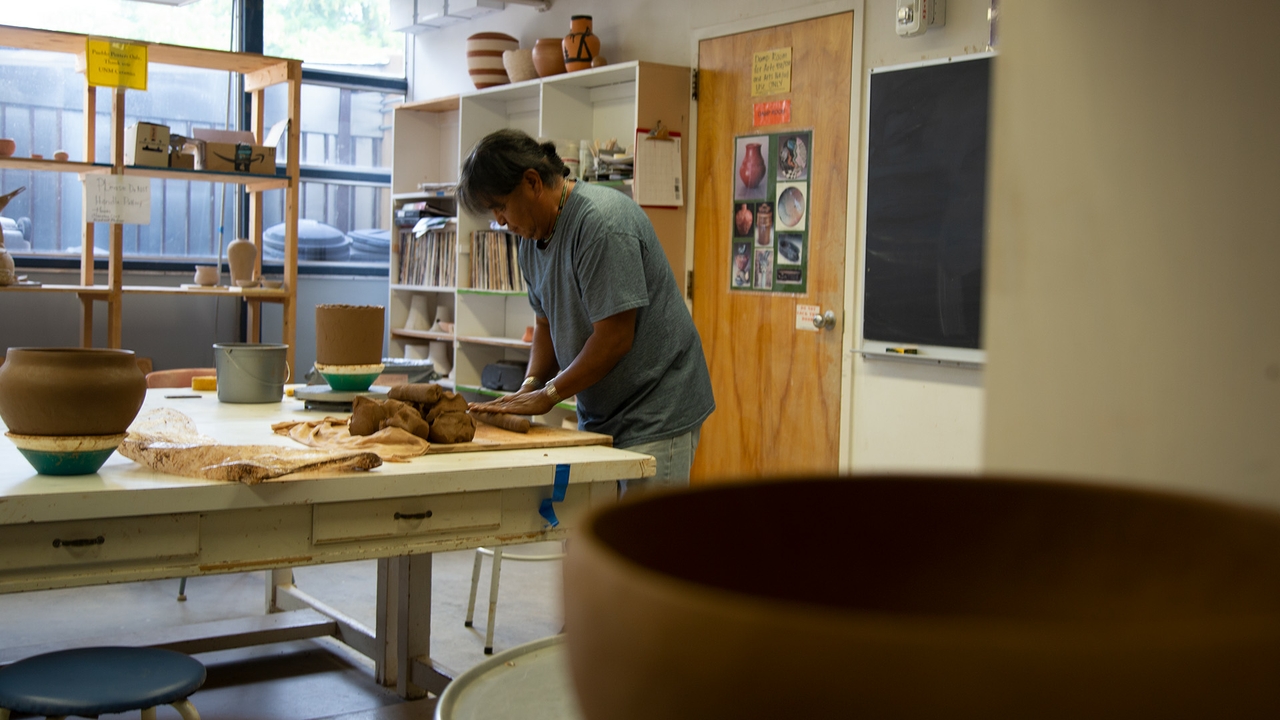 Pottery professor rolls clay in preparation for adding it to the pot he's working on. 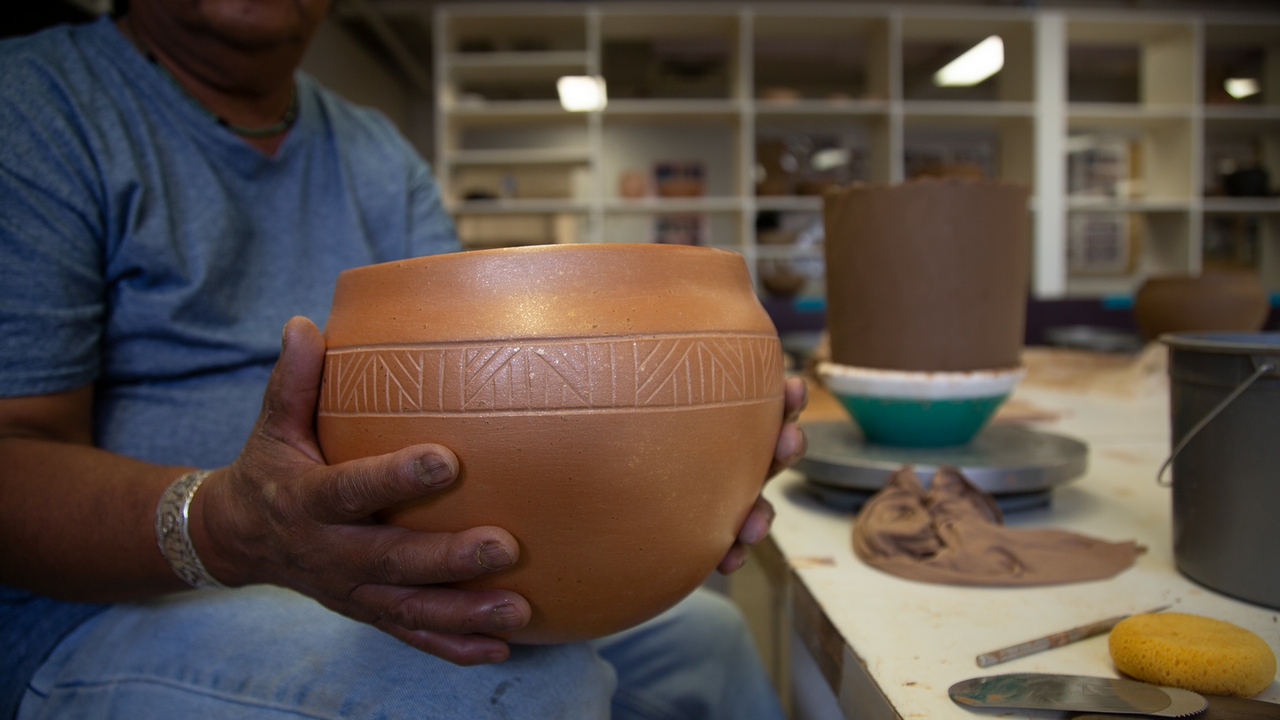 Particles of mica gleam in the clay pot made by Clarence Cruz, Pueblo pottery professor. 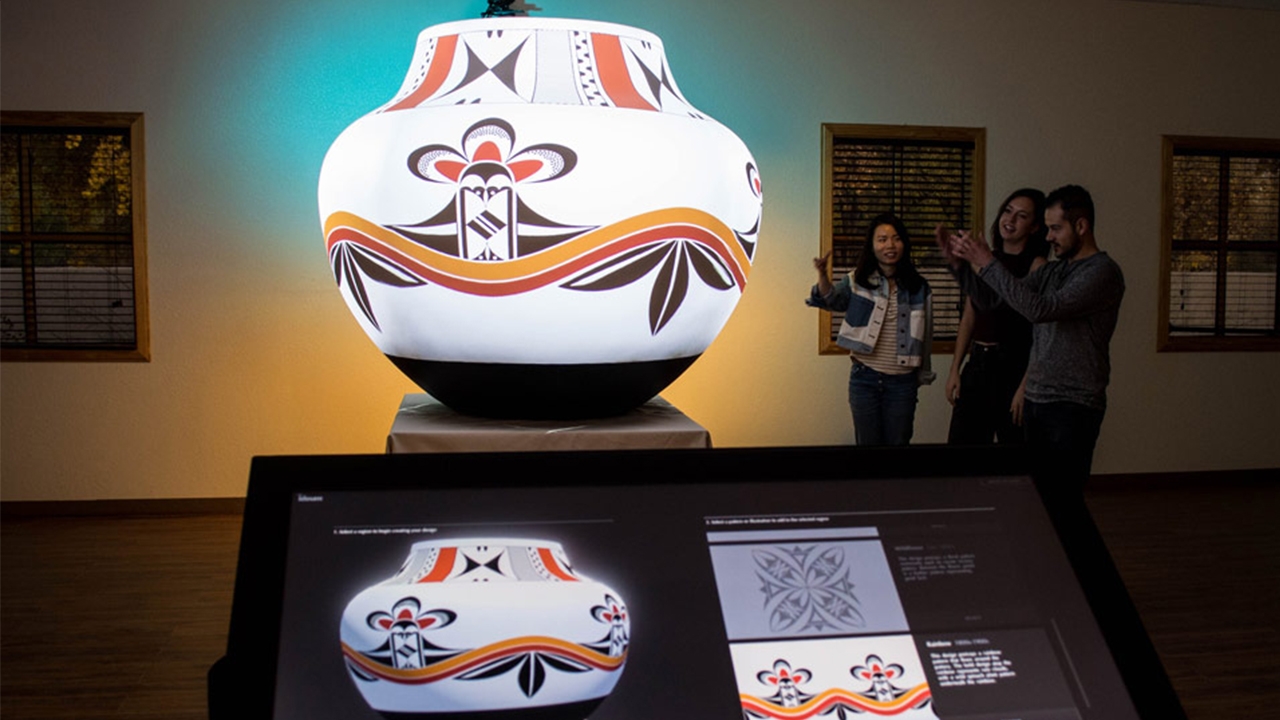 The Exploring Pueblo Pottery project has received a 2019 German Design Award and is the recipient of a Gold 2019 APEX Award in the Experiential Design & Planning category.

Every culture has pottery, says assistant professor Clarence Cruz, who teaches Pueblo pottery classes at The University of New Mexico. Regardless of anyone’s ancestry, every culture uses clay for utilitarian and aesthetic purposes, from Mexican saltillo floor tiles to fine Asian pottery, to the classic blue and white Delft ware of Europe to the highly coveted pottery of the Native American pueblos of New Mexico and the Southwest.

“It always has a purpose, whether it’s utilitarian, ceremonial, or a status symbol,” Cruz said, meditatively scraping a pot to smooth the surface. “We all have ties to clay. How does your culture still use it?”

Through his classes and a recent project with another pueblo potter and Ideum, a company in Corrales that creates compelling digital experiences and designs integrated hardware products to engage visitors in public spaces, Cruz helps people understand the importance of pottery and the symbols used to decorate it.

Clarence Cruz is Tewa and comes from a family of potters from Ohkay Owingeh in northern New Mexico. His native name is Khuu Khuqyay. He’s a graduate of the University of New Mexico, with a master’s degree in Fine Arts, and a minor in Museum Studies. Wikipedia lists him as one of the notable natives of the pueblo for his pottery skills.

We all have ties to clay. How does your culture still use it?

Cruz teaches the art of making pueblo pottery at UNM using traditional methods. Starting from scratch, he and his students go to public lands in Peñasco, El Rito, and Pecos to find clays, pigments, and other materials to make pottery, particularly a clay that contains sparkling flecks of the mineral mica. The clay soil is brought back to UNM in five-gallon buckets, screened to remove rocks and other debris, then put in water, which allows the clay to settle to the bottom. The clay slurry is then placed in a wooden frame on newspapers and canvas to allow the water to drain. Finally, the clay is wedged to remove air bubbles and align the particles.

The students use the traditional method of stacking coils of clay and then using their thumbs and palms to shape the cylinders into bowls and other items. The pieces are decorated in a variety of methods used by various pueblo potters, including potsuwi'l, incising fine lines in the pottery to make designs. The pottery is then fired using traditional methods such as reduction firing, oxidation firing, or open firing (fire clouds) to yield a variety of colors and finishes, including letting the mica flakes gleam through. The finished product is not only beautiful but practical and can be used in the oven, Cruz noted.

Also a priority for Cruz is imparting to his students the spiritual and cultural importance of the art and respect for the Pinkwiyo, the Tewa Mother of Clay, with whom he says he has a meditative and spiritual relationship. When he searches for clay with his students Cruz “reads the landscape and goes where she wants to take me.” After the clay is dug they carefully fill in and cover the area, because “We are guardians of that material.”

Cruz strives to help his students and anyone viewing the pottery to understand the symbols such as “birds, clouds, and ‘the journey’… They’re not just made-up designs.”

In his quest to impart his culture and the importance of pottery, he has collaborated with Acoma potter and jeweler Michelle "Milo" Lowden and Ideum on a project that highlights pueblo pottery and its symbolism. Exploring Pueblo Pottery project uses cutting-edge 360-degree projection technology and captivating experience design “to shine new light onto ancient motifs.”

Cruz had worked with Ideum founder Jim Spadaccini on another project.

“So, Clarence was a very good person for us to reach out to for help. He was a consultant on the project and helped us develop some of the educational content and did quite a few interviews as well. He taught us a lot about the pottery process and different Pueblo styles and designs,” said Ideum director of creative services Becky Hansis-O'Neill. The Exploring Pueblo Pottery project has received a prestigious Global Design Merit Award for interactive experiences from SEGD, as well as a 2019 German Design Award, and is the recipient of a Gold 2019 APEX Award in the Experiential Design & Planning category.

Users can select from a range of designs crafted by Lowden, an Acoma artist from a family of illustrious potters. The chosen designs are animated and cast onto an oversized white olla, or water pot, by four overhead projectors. Viewers then see the blank pot come to life as Lowden’s stylized images of clouds, rain, lightning, mountains, birds, and local wildflowers envelop the surface of the pot.

“They don’t just look but also engage and see what the designs mean,” Cruz said.

Watch the video about the project with commentary by Cruz and Lowden here.