New research suggests Grand Canyon is ‘younger’ rather than ‘older’

The debate over the age of the Grand Canyon has carried on for more than 140 years with several different scenarios bandied about over the decades. Some scientists say the canyon is some 70 million years old, while others believe it is much younger – like 5-6 million years old.

However, new research led by University of New Mexico’s Professor Karl Karlstrom in the Department of Earth and Planetary Sciences in the latest issue of the publication Nature Geoscience, points to a “younger” Grand Canyon that was formed through the integration of the Colorado River through partially carved older paleocanyons beginning 5-6 million years ago.

“When you synthesize our new data in the context of all available data, you get a better picture of the processes involved in the formation of the Grand Canyon,” Karlstrom said. “Coupled with our 2013 paper, we have a really nice synthesis of both geologic and thermochronologic data.”

The decades-long debate centers on a view for the “older” Grand Canyon that says it could have been cut by a precursor east-flowing California paleoriver in the same location as the modern canyon nearly 70-55 million years ago; then a west-flowing Arizona paleoriver 55-30 million years ago cut deeper such that the Grand Canyon had formed in the same location and was cut to near its modern depth by about 50 million years ago, then this paleocanyon was reused opportunistically by the west-flowing Colorado River as drainage became integrated to the Gulf of California.

However, using new results from a rock-dating method called “thermochronology,” which measures erosion when deeper rocks are brought near the Earth’s surface, the differing viewpoint from the “newer Grand Canyon” indicates most of the canyon was carved by the Colorado River relatively recently, in the past 5-6 million years, through a “paleocanyon solution.”

Karlstrom, along with UNM colleagues Professor Laura Crossey, postdoctoral student Ryan Crow and Ph.D. candidate Jason Ricketts, and several other collaborators, researched four of five segments of the Grand Canyon using samples of rock containing apatite from the modern canyon base and the adjacent canyon rim about 1,500 meters above the base. Apatite is a mineral found in some rocks that tells researchers about the thermal histories of those samples and when they cooled as a result of erosion and canyon incision. The research illustrates that the Colorado River used some old segments as it found its path from the Rockies to the Gulf of California over the past six million years. 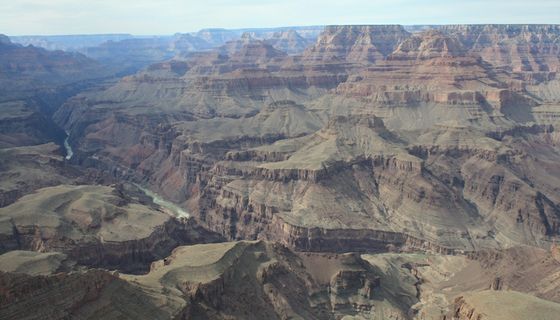 A view from the South Rim of the Grand Canyon.

Using new as well as published data from apatite fission-track dating, apatite helium dating, track-length measurements, and helium 4/3 isotope dating, the researchers found that one of three middle segments, called the Hurricane Segment, was “old” and formed 65-50 million years ago, one segment, the Eastern Grand Canyon, was “intermediate” and formed between 25 and 15 million years ago. However, the two end segments, Marble Canyon and the Westernmost Grand Canyon, were much younger, having been carved out in the past 5-6 million years.

“We reconstructed the thermal histories from the rock samples taken from the modern canyon base and the adjacent canyon rim 1,500 meters above to constrain when the rocks cooled as a result of canyon incision,” Karlstrom said. “Rock gets hotter as you go deeper (into the Earth). As rock moves to the surface, it cools off through erosion. By utilizing these methods, we can determine the timing of the cooling for an individual spot and a timed cooling history for that particular sample. If you know the cooling history for different segments and elevation sample, you can determine the erosion history.”

The new paper may resolve the debate: although parts of the canyon are old, Karlstrom and his research group concluded that the integration of the Colorado River occurred when older paleocanyons carved the Grand Canyon approximately 5–6 million years ago.

“Between the plate tectonic process and the influence of the mantle from below, the western U.S. region has been completely restless for the last 70 million years,” Karlstrom said. “Our paleocanyon solution reconciles all datasets and shows different segments of the modern Grand Canyon had different histories and became linked together by the Colorado River. It’s an important addition to the “young” canyon model: that the Grand Canyon was mostly carved 5-6 million years ago by the newly integrated Colorado River and integration process from river to sea influenced by paleocanyon segments that got linked together by this river.”

Karlstrom gave an analogy drawing a comparison to the formation of the Grand Canyon to the Mother Road, US 66, which later became Interstate 40.

“You can think of it like Interstate 40, where you have several different roads that were pieced together over time to form one big highway,” Karlstrom said. “These paleocanyon pathways all evolved over time to form the Grand Canyon and each segment has a little different history to it. This is a resolution, and not the final word, on the 140-year-old debate on whether the Grand Canyon formed all at once 70 million years ago or six million years ago. It doesn’t mean we won’t learn something new tomorrow.”

The new research was funded through a three-year, $300,000 grant by the National Science Foundation’s Tectonics Program.

Related links
Formation of Grand Canyon - Nature Geoscience
A Geology Exhibition: The Trail of Time at the Grand Canyon