NMiF discusses importance of alternative newsweeklies, free speech and Latinos in the media

This week on New Mexico in Focus, correspondent Russell Contreras sits down with journalist and author Gustavo Arellano, creator of the formerly syndicated column “Ask a Mexican,” to talk about the importance of alternative newsweeklies, free speech, and Latinos in the media.

NMiF Host Gene Grant chats with Raney Aronson-Rath, executive producer of FRONTLINE, about how she has seen the program evolve over the past twenty years and how the long-running program continues to build trust with online and broadcast audiences by being transparent in their documentary process.

Correspondent Laura Paskus brings us a new segment of “Our Land,” NMiF’s monthly series on environmental issues in New Mexico. She talks to climate scientist Jonathan Overpeck, in Santa Fe recently for the 2nd annual Next Generation Water Summit, about the certainty of drought conditions as our planet warms.

NMiF host Gene Grant and the Line opinion panelists look at contested races in the June primary, especially for Congressional District 2. They also discuss New Mexico’s order to reconsider using public funds for private school textbooks and debate the effect of tariffs on the state’s economy.

New Mexico in Focus is involved, informed, in-depth media airing weekly on New Mexico PBS. The program debuts Friday nights at 7 p.m. on NMPBS 5.1 and appears online. The show rebroadcasts on NMPBS 5.1 Sundays at 7 a.m. and on NMPBS 9.1 on Saturdays at 5 p.m. and Sundays at 3 p.m. 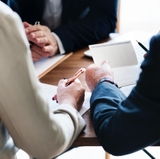