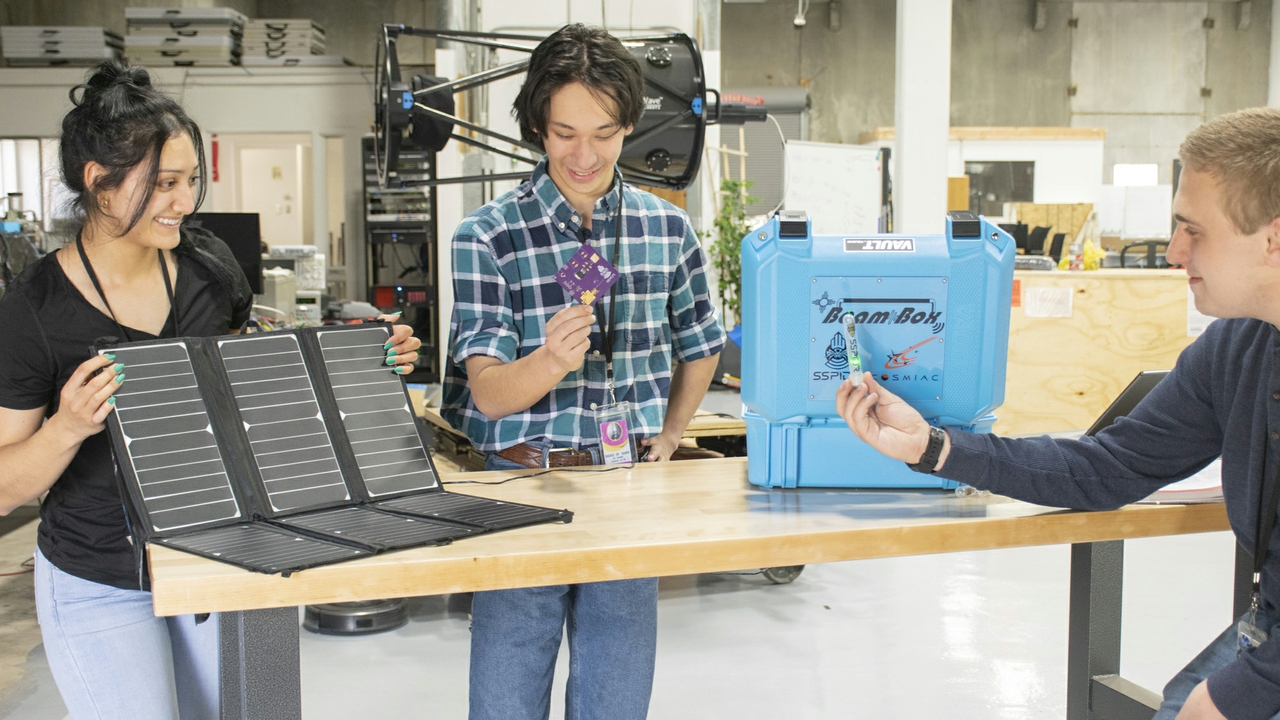 The idea of show and tell is a time-tested way to engage students, especially when teaching about complex subjects. And one research center at The University of New Mexico is taking full advantage of that concept, with promising results.

Beginning last year, COSMIAC, an aerospace-related research center in the School of Engineering, began building and using a small device called a “LEctenna” as a demonstration tool and giveaway to several local middle and high schools.

The LEctenna is an Air Force Research Laboratory (AFRL) Space Solar Power Incremental Demonstrations and Research (SSPIDR) project developed in collaboration with the Naval Research Laboratory. It is a rectifying antenna (rectenna) with a light-emitting diode (LED). This device, which resembles hairpins attached to a small light, Indicates the presence of microwave radio-frequency (RF) signals, such as wireless signals from a Wi-Fi router or a phone. It can also detect radiation seeping for the edges of a microwave.

The LEctenna measures just a few inches long, is encased in a plastic tube and contains two diodes and an LED. The construction of the diodes results in a net positive voltage when it detects frequencies in the range that includes Wi-Fi and Bluetooth signals, which causes the LED to light up.

The LEctenna is just one part of the engagement; there is also a full presentation that COSMIAC conducts for classrooms with a demo box of electronics called a Beam Box that sends out RF signals and where students can do hands-on projects, allowing them to see how the technology works. The presentation focuses on how space solar power works and the efforts of the AFRL SSPIDR project. In particular, it focuses on the concept of capturing solar power in space and using microwaves to beam the power to Earth’s surface.

“The full presentation really brings out that ‘wow’ factor,” said Steve Lindsley, a research engineer with COSMIAC and a graduate student in mechanical engineering who has been involved with the outreach to schools.

“This is a fun and simple demonstration of science in action, and we have received a lot of positive feedback from teachers and students so far,” said Will Hamel, a research engineer and an undergraduate in electrical engineering. “We are looking forward to going to more schools this spring.”

The outreach presentation is the brainchild of Dante Orona Yang, an electrical engineering graduate student and COSMIAC research engineer, working with former COSMIAC research engineer Kimberly Faris, who organized the program with the schools. Hamel and McKenna Collins, an undergraduate in electrical and mechanical engineering, aided in the manufacture of the Beam Box and are presenters for the COSMIAC outreach team.

“It is very important that students get exposed to STEM early. It was outreach programs like this that set me on the path of engineering that I am on today,” Orona Yang said. “As space-based solar power matures, these students will be the scientists and engineers that will be implementing this in the future, which is why it is important for them to be exposed to the concept now.”

The outreach uses simple demonstrations to illustrate the much larger and complex technology critical for operational solar power transmission that the SSPIDR project is researching. SSPIDR’s ultimate mission is to develop five key technologies: deployable structures, energy generation, thermal management, RF beaming and metrology. The goal of this research is to pave the way for the development of a new power system for forward-operating bases that will replace thousands of gallons of fuel and large generators with a rectenna that receives solar energy beamed from orbit.

COSMIAC staffers say they are hoping to visit more schools in-person this spring, because the engagement factor is higher with the hands-on demonstrations. So far, about 2,300 LEctennas have been built, with many of them handed out to the schools and others that will be distributed in spring 2022.