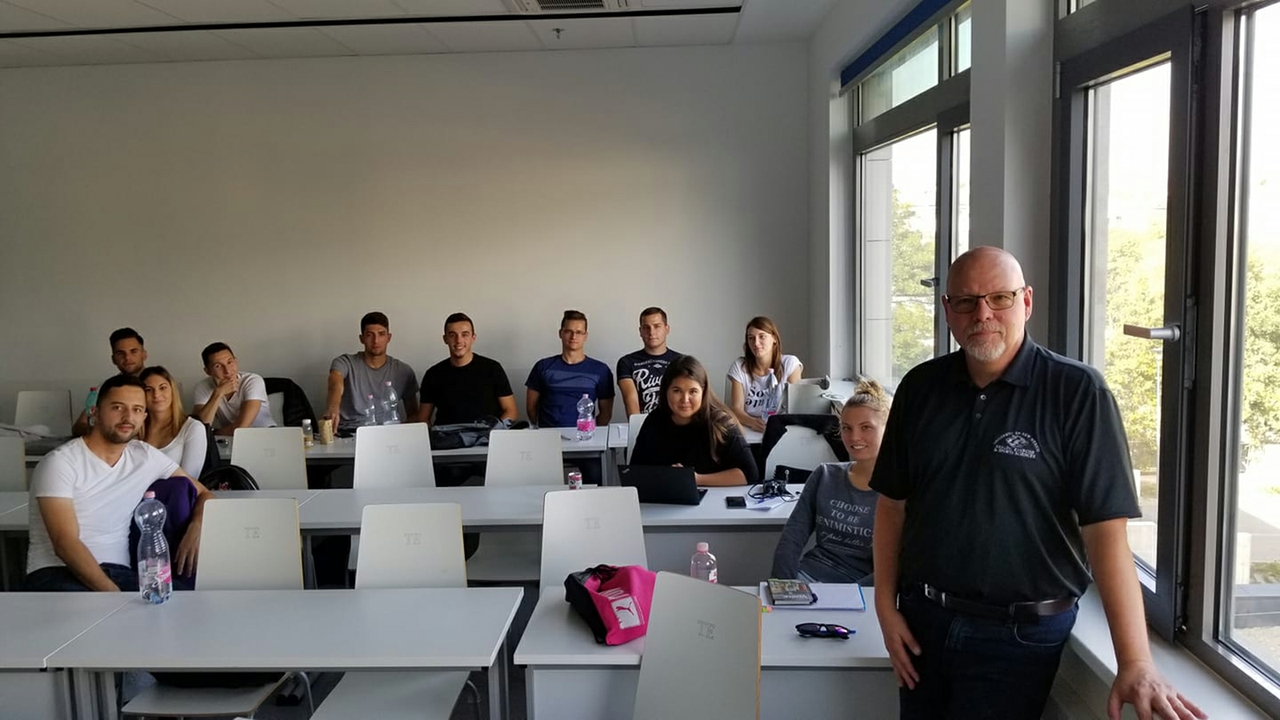 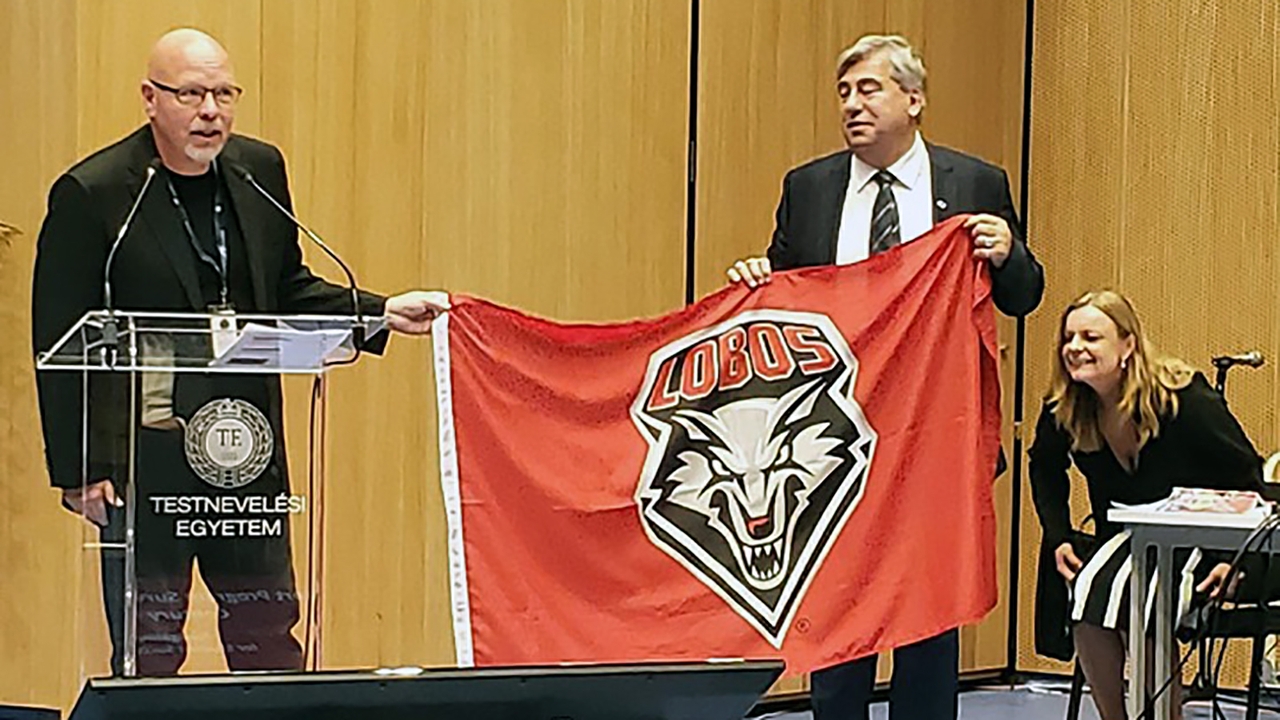 While in Budapest, Barnes presented a Lobo flag to the Rector of UPE. 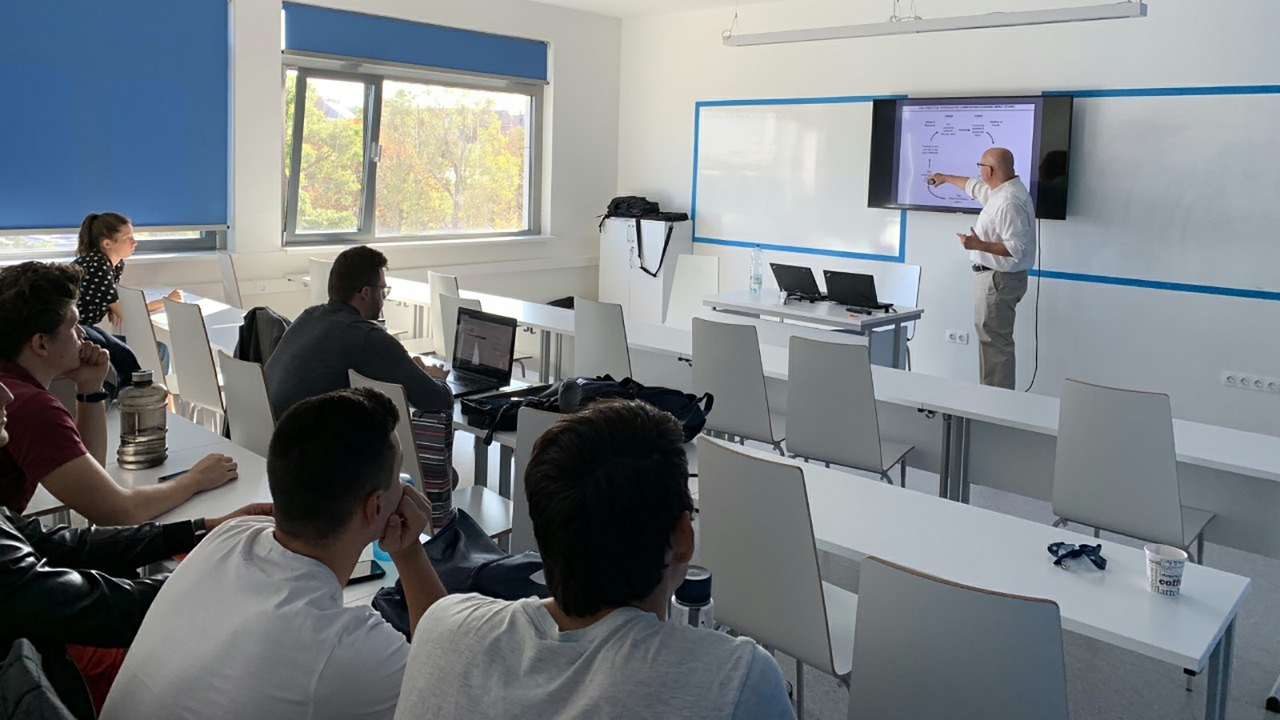 Barnes hosting a session on rationale for public funding of sport facilities and events. 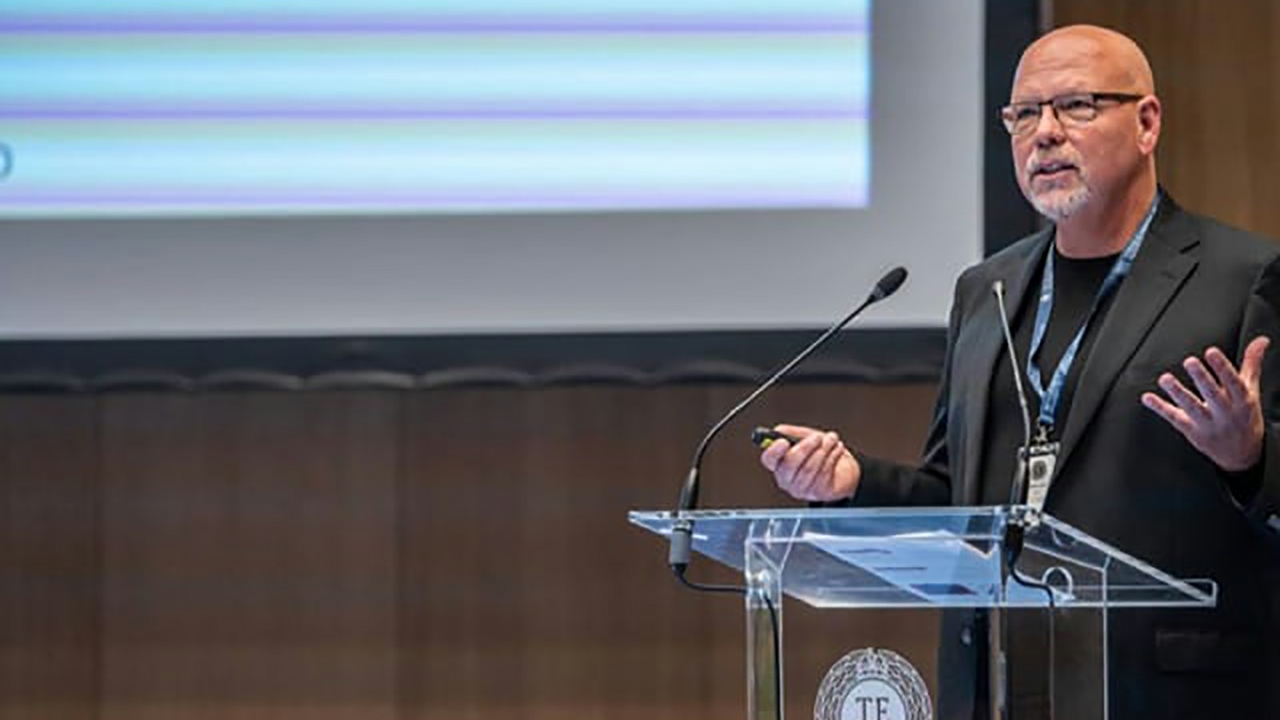 An associate professor of sports administration in UNM's College of Education is strengthening New Mexico’s ties to Hungary’s flagship sports university, the University of Physical Education (UPE) in Budapest.

John Barnes was recently asked to be the keynote speaker at the 3rd International Sport and Innovation Conference, held on the UPE campus. Hundreds of sport experts, athletes, educators and administrators attended the event, which focuses on creating opportunities to exchange ideas. 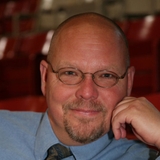 “I think creating international relations is a big piece of what the College of Education does. Those ties are important for an R1 institution like UNM, so we can continue building our global reputation.” – John Barnes, associate professor of administration

Barnes is clearly a sports enthusiast, as evidenced by the innumerable mementos that line his office walls from his nearly two decades in sports administration. His face lit up when talking about this most recent experience, and what it meant to him personally as well as professionally.

“It was the largest group I’ve ever spoken in front of and I was quite nervous,” Barnes said. “But what was really cool was seeing people in the crowd taking pictures of my slides and realizing what I was saying was really resonating with them.”

With a crowd including participants from Ukraine, Albania and many other European countries, the platform put UNM’s Sport Administration program in the international limelight. It also continued building on a budding partnership with the Hungary institution that’s been growing recently. Last May, a group of UPE faculty spent six weeks doing English immersion classes on UNM’s campus and taking part in a series of workshops administered by the Sport Administration faculty and staff.

“One of the drawing factors of UPE is that they do a lot of their instruction in English, and a lot of international students want international instruction so they can work on their language skills,” Barnes explained. “So, during their time here at UNM, the school leaders asked me to attend and teach at their conference. It was very exciting, and I was quite honored they would extend such an invitation.”

But Barnes realized he was in a quandary: his research line is college athletics and doesn’t include international data – what would he talk about? He did as any good educator does and got creative, finding a way to juxtapose the knowledge of his research with the struggles facing universities worldwide.

“I realized the first chapter of my forthcoming book is about higher education as it exists today, and the corporate university and corporate involvement, and where athletics fits into all that,” Barnes said. “So, I focused my talk on how to create a relationship that will be equitable for your academic program or organization and an outside funding agency.” 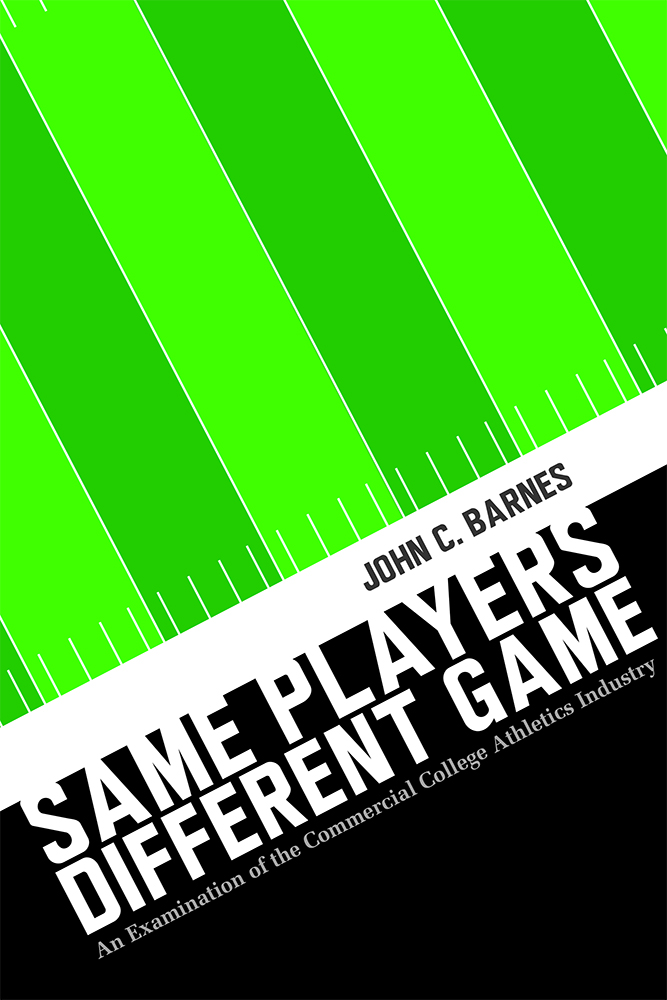 He’s referring to is his upcoming UNM Press publication ‘Same Players, Different Game: An Examination of the Commercial College Athletics Industry.’ The book is available for pre-order online and is scheduled to be released in March 2020; but it has already has garnered a positive response from peers.

“It not only covers historical issues and precedents in the crazy world of commercialized college sports in America, but it also includes a focus on the current and relevant issues of intercollegiate athletics literally as they are happening,” said acclaim by B. David Ridpath, associate professor of sports administration at Ohio University.

The book provides somewhat of a guide for current and potential administrators, coaches, regents, and others involved in collegiate athletic operations and decision-making. It covers Title IX requirements, commercial investments, student testing, and television contracts.

Barnes says the completion of the book, a three-and-a-half-year endeavor, serendipitously supported his trip abroad – where UPE’s club basketball program had just been elevated to its first division professional league. To have a college team play in a professional league is unheard of in the U.S., but something Barnes says he could see becoming more likely in the future. He says learning new concepts and possibilities from schools abroad is one of the most rewarding parts of attending and teaching at conferences.

“Our reputation at UNM requires us to be thought of internationally,” Barnes concluded. “And I’m hoping my next book will address what’s happening overseas and how that could impact us or be implemented here at home.” 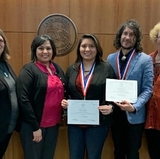