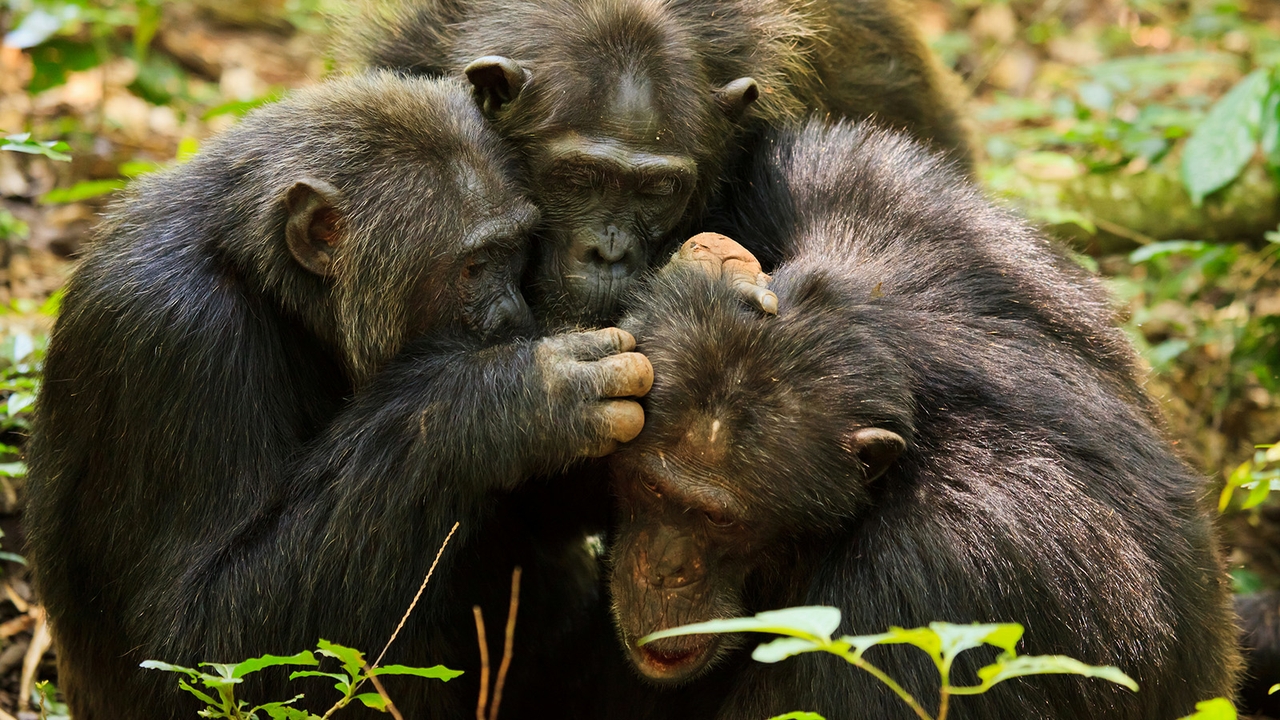 Old friends get together to relax, share meals, and trust and support each other. In the latter part of life, these friendships are highly valued. Recent research shows this happens in chimpanzees as well as humans.

Chimpanzee and human friendships show many parallels, according to new research published this week in Science by associate professor Martin Muller at The University of New Mexico Anthropology department, associate professor of Anthropology and co-director of the Comparative Human and Primate Physiology Center Melissa Emery Thompson, and their colleagues.

This work, a collaboration among researchers at UNM, University of Michigan, Tufts University, and Harvard University, uses data from the Kanyawara chimpanzee community living in Kibale National Park in Uganda and was funded by the National Institutes of Health and the National Science Foundation. These chimpanzees have been studied for decades by the Kibale Chimpanzee Project, and researchers leveraged this exceptional dataset to test socioemotional selectivity theory – an influential idea in psychology aimed at explaining why humans show changes in social interactions during aging.

“I study chimpanzee behavior and physiology, partly to help understand the evolution of human behavior and physiology… This study was part of a larger project on aging and health in chimpanzees. We were interested to see whether chimpanzees showed changes in their social relationships with aging that mirrored those commonly seen in humans,” said Muller, who has traveled to Kibale once or twice a year for 20 years to supervise the collection of these data, and, more recently, worked with graduate students at UNM to organize, clean, and analyze them.

“Dr. Emery Thompson and I were part of this study, as was our graduate student Drew Enigk. Drew provided the data on male dominance ranks for the paper. He went through large numbers of aggressive interactions among the chimpanzees to see who won and lost fights, and who was submissive to whom. He then assigned dominance ranks using an Elo rating procedure, as is done to rank football teams or chess players,” Muller noted.

“No one thinks that wild chimpanzees are conscious of their impending mortality, but they too seem to show this same shift away from negativity in old age. We think that the importance of coalitions and alliances in chimpanzee society may be a critical factor."

Wild chimpanzees share social aging patterns with humans, by prioritizing strong social bonds, and interacting with others in increasingly positive ways as they get older.

Chimpanzee friends prefer each other's company. They tend to travel in the same groups and sit in proximity. Chimpanzee friends reciprocate. They groom each other, share meat with each other, and support each other in disagreements with other chimpanzees, Muller observed. And friendships can persist over many years. In laboratory studies, chimpanzees trust their friends more than other individuals in risky situations. Endocrine studies have shown that grooming with friends is particularly effective in reducing stress.

Socioemotional selectivity theory proposes that people shift their social behavior from a focus on forming new friends in young adulthood, to maintaining a smaller network of close, fulfilling relationships in old age.

“The proposal is that this shift happens because of our human ability to monitor our own personal time horizons—how much time we have left in our life—which causes us to prioritize emotionally-fulfilling relationships when time is perceived to be running out,” Muller explained.

Using 20 years of behavioral data, researchers found that chimpanzees, like humans, increasingly prioritized mutual and equitable friendships with others that invested in them as they got older. Younger adults, in contrast, were more likely to form lopsided relationships where their partner did not reciprocate. Older chimpanzees also were more likely to be seen alone, but tended to socialize more with important partners when they did join the group. Finally, they showed a positivity bias in their overall behavior: reducing their aggressive behavior while maintaining levels of affiliative grooming.

“A major motivation for this paper was testing socioemotional selectivity theory. A large psychological literature suggests that in humans, old age leads to a focus on existing close relationships, increased attention to and memory for positive social interactions, and reduced engagement in tension and conflict. Psychologists have argued that this emphasis on positive relationships and emotions in old age results from a conscious sense of impending mortality. When the end is near, people accentuate the positive and eliminate the negative,” Muller said.

“While that may partly be true, our data suggest that something more fundamental may be happening with the aging process,” he continued. “No one thinks that wild chimpanzees are conscious of their impending mortality, but they too seem to show this same shift away from negativity in old age. We think that the importance of coalitions and alliances in chimpanzee society may be a critical factor. We have shown in Kibale that despite failing health and falling social status, older chimpanzee males often continue to successfully compete for mating opportunities and sire offspring. They do this primarily by forming coalitions with other males. If older individuals are reliant on coalitions, then this might explain their focus on positive interactions with close friends. Humans, of course, also use coalitions and alliances to a much greater extent than most primates, so this similarity in aging with chimpanzees may not be coincidental.”

Taken together, these results show that chimpanzees share these special social aging patterns with humans, even though they do not have the same rich future time perspective and knowledge of their own mortality that we have. This is the first demonstration that a nonhuman shares these characteristics with us. The shared pattern between chimpanzees and humans could represent an adaptive response where older adults focus on important social relationships that provide benefits, and avoid interactions that have negative consequences as they lose competitive fighting ability. This research highlights how long-term behavioral datasets from wild animals like chimpanzees can help us understand and promote healthy aging in humans.