A research discovery was born from great frustration when Eric Peterson, a graduate student in Nanoscience and Microsystems Engineering at UNM, set out to learn a new measuring technique four years ago as part of his Ph.D..

Peterson, a non-traditional student, had worked at the Los Alamos National Laboratory as a technical staff member for years before he retired and decided to attend UNM to earn a Ph.D. He began working with Distinguished Professor of Chemical and Biological Engineering Abhaya Datye on a project to improve the ability to measure the sizes of nanoparticles, especially those that are smaller than 1 nanometer – one billionth of a meter.

Datye was philosophical: “I told him he was probably just doing the measurements wrong.”

Peterson, Datye and Andrew DeLaRiva, another graduate student working with them, moved on to study the samples via aberration-corrected TEM. But Peterson kept thinking about those incorrect measurements. “I think there is something going on there that we don’t understand,” he insisted. He was confident that there were single atom isolated species of palladium that were confounding his measurements. DeLaRiva helped confirm the hypothesis using images obtained at Oak Ridge National Laboratory.

Datye encouraged Peterson to describe his results at a national conference.  A group of researchers from the Institute for Integrated Catalysis at Pacific Northwest National Laboratory got interested and decided to replicate the synthesis. They came up with the results similar Peterson’s.

They replicated preparation of the samples, but it has taken years of measuring, rechecking, and using advanced in-situ techniques at Argonne National Laboratory and working with theory groups such as graduate students Ryan Johnson and Chemistry Professor Hua Guo to understand the unexpected catalytic behavior of the atomically dispersed palladium catalysts that were synthesized at UNM.

Datye said, “Most of the pollutants from a modern automobile are emitted during the first 30 seconds of starting a car, when the catalyst is still being warmed. At low temperatures, carbon monoxide builds up on the catalyst, decreasing its efficiency. This research shows a way to make the catalyst more effective at lower temperatures by enhancing its reactivity.”

A research roadmap established by the U.S. Dept. of Energy sets 150 degrees Celsius as a target for achieving removal of pollutants from exhaust. Datye and his colleagues are working to establish a way for the catalytic converters to work efficiently at or below that target temperature. 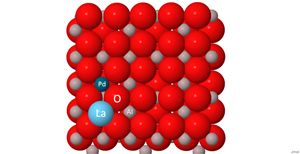 Space filling model for the La and Pd on the g-alumina (100) surface. Atoms are: oxygen/red, aluminum/gray, palladium/dark blue, and lanthanum/light blue. The La atoms sit in the four fold hollows on the alumina surface and help to trap the Pd atoms nearby.

Can a catalyst composed of single atomic units function in an industrial reaction?
The article describes how single atoms of palladium, which is a member of the platinum group metals, can be stabilized on alumina, especially alumina modified by lanthanum oxides. The lanthana is itself present as isolated single atoms, and it helps trap palladium atoms. The isolated palladium atom species show unusual reactivity for carbon monoxide oxidation at low temperatures, since the palladium in ionic form has a lower binding energy and hence is not poisoned by carbon monoxide.

The finding that isolated palladium species can be stabilized on an industrially relevant support such as alumina, the authors suggest, is of potential interest to the field of automotive catalysis and to other heterogeneous catalysts and also for improved understanding of sintering and dispersion. Single isolated transition metal atoms provide the ultimate in atom efficiency, in the context of reducing the demand for costly precious metals such as platinum or palladium.

A final word
Peterson was lead author of the article. In May he graduated from UNM with his Ph.D. and is planning to work at the university in UNM’s x-ray diffraction laboratory. He is working with Datye and pursuing the idea of catalysis at the atomic level in catalytic converters and talking to industrial partners.