A free screening featuring the film, Stewart Udall: The Politics of Beauty will be shown at The University of New Mexico, followed by a panel discussion with the director, environmental faculty member Andreas Hernandez and journalist Laura Paskus, senior producer of New Mexico PBS' "Our Land" series, part of New Mexico in Focus.

The new 78-minute documentary celebrating the work and legacy of former Interior Secretary Stewart L. Udall follows the trajectory of Udall’s remarkable life from his childhood in a Mormon ranching family in St. Johns, Arizona, to his final 20 years as a resident of Santa Fe. 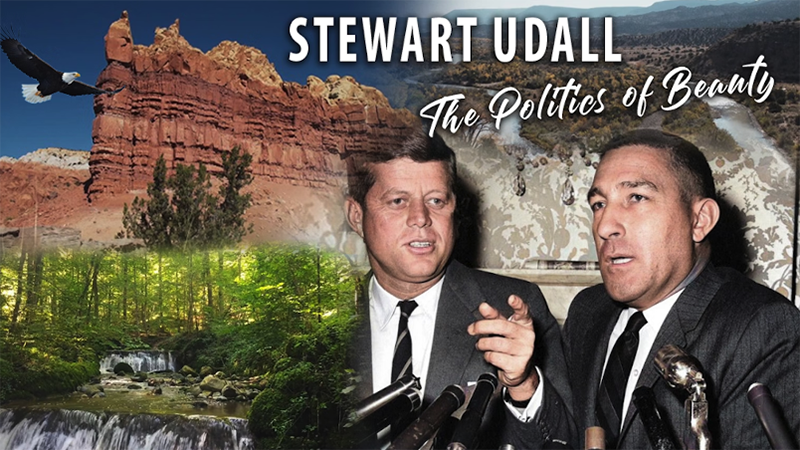 Stewart Udall: The Politics of Beauty was made possible, in part, by generous donations from our main sponsors, PNM and AVANGRID, as well as several other funders, including 200 individuals.

Stewart Udall was arguably THE most effective environmentalist in American history. He fought tirelessly for the protection of our planet and its natural beauty. He was the FIRST public official to speak out against global warming! But a film on his life and accomplishments has never been made; until now.

“I’ve wanted to tell Stew Udall’s story since I first interviewed him back in 1988,” says director de Graaf. “In making this film I discovered just how relevant his life story and work are to all the of crucial issues we face today—from global warming to racial and environmental justice to world peace. Stewart Udall tried to bring people together across political lines, another message we need now more than ever.”

Stewart Udall: The Politics of Beauty chronicles Udall’s World War II experiences, his days as a star basketball player for the University of Arizona, his efforts to end Jim Crow policies at the University and later, in the National Park Service, his election to Congress and his decade as Interior Secretary under Presidents Kennedy and Johnson, during which he helped create dozens of National Parks, Monuments, Historical Sites and Wildlife Refuges. The Department of the Interior Building in Washington DC was renamed in his honor.

He pushed legislation through Congress mandating clean air and water, preservation of wilderness areas, restrictions on pesticides, reclamation of strip mining, and the establishment of Wild and Scenic Rivers and National Trails systems while changing the Bureau of Indian Affairs to provide greater self-determination for Native tribes.  He was also a champion of arts and culture, a quality not expected of a rural Westerner. The film explores the hard choices Udall had to make regarding both the Vietnam War and plans to dam the Grand Canyon, which he stopped.

After his stint at Interior, Udall fought actively for more than a decade for compensation for the cancer victims of the fallout from atomic testing and from uranium mining. His final days in Santa Fe were spent mostly in writing; in all, he wrote nine books and countless articles, beginning with his 1963 best-seller, The Quiet Crisis. The film goes beyond Udall’s accomplishments to explore the values that motivated him, especially his concern for beauty and balance, as expressed in the Navajo concept of Hozho.

For more information, questions or to schedule an interview, email John de Graaf: jodg@comcast.net or call 206-407-5490.

This screening is made possible by support from the New Mexico Humanities Council.