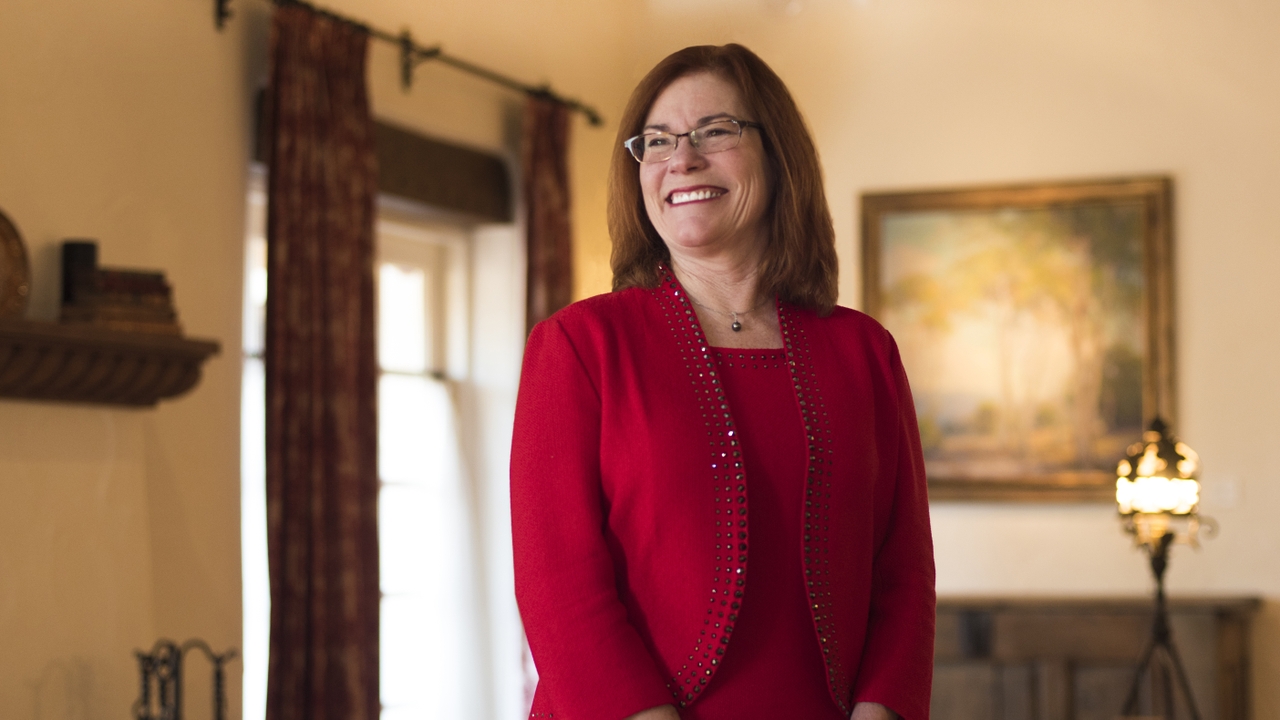 Stokes takes the helm of the state's flagship institution

Her path to leadership wasn’t intentional, but her decisions as a leader have been deliberate. Garnett S. Stokes was a psychology professor who wanted better for her department, when no one stepped-in to help, she stepped-up. Now decades later, she’s the president of The University of New Mexico and she has promised the Lobo community the same—better, for the University.

As an experienced administrator in higher education, Stokes believes that effective leadership involves the capacity to listen and consult with others and that’s exactly what she plans to do.

“Maybe it's because I started as a faculty member, and consultation is very much a part of the way in which faculty are engaged at a university,” says Stokes. “It helps build relationships with people and I do think relationships turn out to really matter when we tackle some of the difficult issues that we face in higher ed.”

Stokes recognizes, “It'll take a while to get to know this place and its history, but I think the style that I bring, which is a real interest in people's experiences and perspectives will help me get to know this place better and more quickly—there's a lot to be done, so understanding people is going to be important in thinking about what we might do.”

“I want people to know how excited I am to be here. That I truly picked this position to apply for because this is where I wanted to be and I hope that shows." —President Garnett Stokes

Stokes will soon start charting a course for the University, something she has experience doing. She was provost and executive vice chancellor for academic affairs at the University of Missouri (Mizzou). This past summer she served as that flagship university’s interim chancellor as well.

Prior to that, she served as interim president, as well as provost and executive vice president for academic affairs, at Florida State University (FSU), also a public research university.

Having worked at these public research universities, Stokes is passionate about the important role these types of institutions play in producing the workforce that's needed for industry, building communities and economic development.

“I’m also passionate about how education is transformative for students and faculty. I'm really thrilled to be at The University of New Mexico,” said Stokes. “My attraction to being here in part was because it’s New Mexico, but also that it is a flagship university.”

“There are lots of institutions of higher education in New Mexico that do a wonderful job of educating students,” she said. “But I think there's a special role for the big research university and what it does for students, but also for the communities in the state.”

Stokes is a new resident of New Mexico, but not unfamiliar with the state. She spent time here as a child camping at Conchas Lake, as part of her family’s annual cross-country road trips. She has wonderful memories of the winds picking up at night, something she hears happens often not just at night but during the day in the spring.

“My first impression of New Mexico was really that it's a beautiful place,” she recalled. “I happen to love high desert—I used to vacation here, so I came to this job with some impressions. Those impressions are the ones that led me to look at this position when I knew it was available. But great food, great culture, great environment—those are things that I think of when I think of Albuquerque, when I think of the state.”

Her enthusiasm was also extended when describing her first impressions of the University.

“I think it's a lovely place,” she said with a genuine smile. “I love the architecture and the consistency of it. It's fits with the environment very well. I'm excited to see so many disciplines represented, excited to see the number of art areas that are represented. The people that I've met so far have been wonderfully welcoming and I can feel the excitement about my coming in, which makes me feel very good.”

A top priority for the new president is getting to know the diverse student population on campus. She can already identify with many of them as she too was a first-generation college graduate.

When asked what she would tell these students, she didn’t hesitate.

Stokes earned a B.A. in psychology from Carson-Newman College in Jefferson City, Tenn. and M.S. and Ph.D. degrees from the University of Georgia in industrial/organizational psychology.

On March 1, she officially became the first female president in UNM’s 129-year history.

As the new Lobo leader, she plans to incorporate many of the lessons she has learned on her journey through higher education. One of the most valuable of those lessons—temper judgement.

“One of the most valuable lessons I've learned, is that there's always another side to the story. People bring you problems or they tell you about situations and it turns out that the first thing you hear may not be fully representative of what's really going on,” she said. “I've learned never rush to judgement, always realize that there's probably more information, another perspective, some piece of information that you're missing and I've often had to advise—I’ve hired a lot of leaders—don't assume that you have the information you need and don't act too quickly, make sure that you really have the whole story.”

As Stokes prepares for a number of meet and greets and community functions there’s one more thing she wants people to know.

“I want people to know how excited I am to be here. That I truly picked this position to apply for because this is where I wanted to be and I hope that shows, but I want to be sure people know it.”