Living off-grid is becoming as synonymous with Taos as is art. Five years ago, Taos High School English teacher and author Jim Kristofic set out across the Southwest on a quest to find sustainable building techniques and learn the philosophies of its gurus.

What came from Kristofic’s experience as an apprentice with the architects and builders — who know how to erect buildings that take care of their inhabitants and the environment — is his latest book, House Gods: Sustainable Buildings and Renegade Builders. It’s published by The University of New Mexico Press and was released May 1. 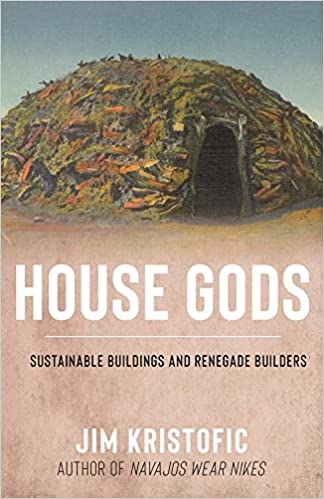 House Gods is about living in better buildings — affordable, sustainable structures built with no harm to the environment and less stress on the wallet. His book is not, however, a DYI guide to sustainable homes but, rather, a book about why we should be building more of them. It’s more cerebral and soulful than a bunch of blueprints.

What emerges in House Gods is a strange and haunting quest through adobe mud and mayhem, encounters with shamans and stray dogs, solar panels, tragedy, and true believers. It is a story about doing something meaningful, and about the kinds of things that grow out of deep pain. “One of these things is compassion — from which may come solace,” said Kristofic.

He spent five summers researching in the form of construction work and conducting interviews. Kristofic admits that he had a hard time finding ways to connect all the perspectives of the different builders. “But I found them,” he said. What most surprised Kristofic from the labor and discussions was, “The simpler you keep things, the better.”

The significance of this book was apparent to him before he wrote the first sentence. “I have challenged the idea that sophistication and technology are ‘salvational’ forces,” he shared. “The entire book was important and I enjoyed writing all of it.”

A contributor to House Gods is UNM-Taos Construction Technology Coordinator Mark Goldman, who is one of the builders/architects interviewed for a chapter. Kristofic reached out to Goldman after he attended a one-day UNM-Taos Construction Tech public event associated with the Taos Solar Music Festival. Coincidently, Kristofic’s classroom at Taos High School was near where Goldman was teaching a dual-credit construction technology course. They subsequently became friends.

“Jim would sketch hand-drawn concept ideas,” Goldman said about his role in the project. “I would turn those concepts into computer 3D models and plans, sections and elevations, and, most importantly, buildable construction details. I was sort of in a regular architect type of role.”

Goldman and Kristofic are in the process of building “a very simple, small home” in Arroyo Hondo, which is mentioned throughout the book. Kristofic added that their structure is “experimental.” Goldman is continuing to help develop the construction documents for the small house. Goldman said he came to realize from working with Kristofic on this very small home design that “the conventional home being built in the U.S., and supported by the entire mortgage industry, is perhaps much bigger and more expensive than what is desired.”

Kristofic was raised on the Navajo Reservation in northeastern Arizona. Besides being an English teacher and author, he’s worn many other worker hats: river guide, journalist, ranch hand, National Park Service ranger, and oral historian. He currently lives in Taos. This is his 7th book.

“Kristofic is a terrific, compelling writer who has turned the topic of sustainable housing into a transcendent cause. His knowledge of the land and the culture and the history of the American Southwest is nothing short of thrilling and, as a reader, I would follow him anywhere he wants to go. We need what he has to say. And it’s an enormous pleasure to hear it.”
— Sebastian Junger, New York Times bestselling author of WAR, The Perfect Storm, and Tribe: On Homecoming and Belonging.