Deep inside the basement of Northrop Hall, in The University of New Mexico’s Department of Earth and Planetary Science, sits a high-tech center attracting scientists to UNM from all across the state. The instruments housed there are helping researchers answer questions and gain knowledge about structures invisible to the naked eye.

TEM-XRD is a facility that works primarily in nanoscience – a field that studies extremely small structures and materials usually less than 100 nanometers in size, down to the atomic scale. For reference, a human hair is between 60,000 and 80,000 nanometers wide. So, to be able to see things on this atomic scale, researchers need extremely sensitive equipment.

“We are unique in New Mexico in being the only academic institution that has this sort of facility,” said Adrian Brearley, professor of earth and planetary science and director of the TEM-XRD facility. “These techniques are applicable in everything from earth, environmental and planetary sciences, materials science, particularly high technology materials, metallurgy, chemistry, physics, biological sciences and much more.” 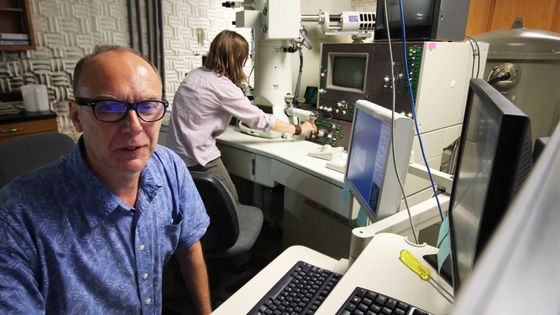 The facility houses two main types of instrumentation; TEM – Transmission Electron Microscopy – and XRD or X-Ray Diffraction. These tools give researchers the ability to analyze materials at the atomic level and generate information about the structure, chemistry, bonding and behavior of a variety of crystalline, solid materials.

The information provided by the equipment is extremely useful for researchers in just about every scientific field and has wide reaching implications to public health and the development of new technologies.

According to Brearley, one such impact is in the delivery of medication for certain illnesses. He says UNM Distinguished Professor of Biomedical Engineering Jeff Brinker is working on research that uses nanomaterials to deliver drugs to specific areas in the body to treat diseases such as leukemia.

“He’s developing nanomaterials that can absorb drugs onto their surfaces and then they can be ingested or inhaled,” said Brearley. “Once those materials are inside the body, they deliver drugs to very specific targeted areas, such as cancerous cells.”

Distinguished Regents’ Professor and Chair of the Department of Chemical & Biological Engineering, Abhaya Datye and his research group are also regularly uses the facility. Datye’s work with catalysts have wide reaching applications in energy generation and sustainability. Professor Datye has been a major supporter of the TEM-XRD facility for many years and has played a critical role in its development.

Brearley’s own research group in Earth and Planetary Sciences uses the facility extensively to study a wide range of geologic materials. These include environmental samples such as contaminated sediments released from the Gold King Mine spill, Colorado and materials from abandoned uranium mines that pose significant health hazards in the Navajo Nation. Brearley and members of the Institute of Meteoritics, including Professor Carl Agee and Research Professor Charles Shearer, also use the TEM-XRD facility to study a wide range of extraterrestrial samples, such as meteorites from asteroids and Mars, samples from the Moon, and cometary samples returned by the NASA Stardust mission from Comet Wild-2. 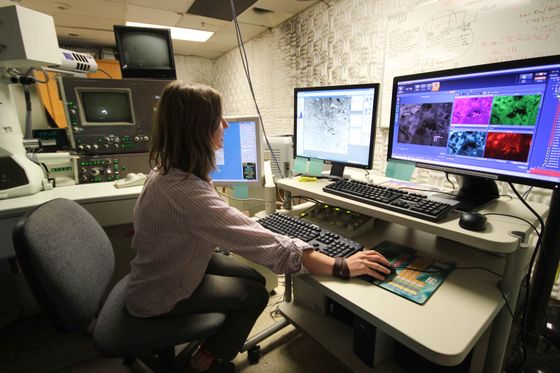 These are just a few of the hundreds of researchers who use the facility for cutting edge work every year. Brearley says the center has roughly 250 unique users every year from all over campus, including south and main campuses, the Health Sciences Center and across the state.

“Along with graduate and undergraduate students, postdoctoral fellows, research scientists and faculty, we also have outside users from Sandia National Labs, Lovelace Respiratory Research Institute, Los Alamos National Lab, UC Boulder, New Mexico Tech, New Mexico Highlands University and several private companies including local startup companies” said Brearley. “As the flagship university of New Mexico and the only institution in New Mexico with these kinds of facilities, we really do play a pivotal role within the state for researchers who need these kinds of instruments for their studies.”

The lab was first established in 1984 and has continued to grow its capacity for research ever since. Right now, there are six different instruments being used at the TEM-XRD facility equipment that represents roughly $6 million worth of capital to the University. And Brearley hopes the center can continue to build its repertoire, not only for the benefit of researchers but also for students who are learning valuable lab techniques at the center every day.

“One of the really important things for me is having these instruments here at UNM, so that undergraduate and graduate students can get trained on them and use them for their research,” said Brearley. “They’re very important skills that are very employable. So, by getting familiar with the technique, you have a technical skill, as well as developing all the critical and analytical scientific thinking skills that you get from obtaining a master’s degree or a Ph.D.”

As a facility that serves scientists and researchers from across campus, TEM-XRD facility is naturally an interdisciplinary center, making it a perfect fit for UNM’s new Physics & Astronomy, Interdisciplinary Science (PAIS) complex.

The building will also house several UNM research centers, including the TEM-XRD facility, something Brearley says will have an enormous impact on the future of the facility.

“To move forward and enhance what we do on campus and to increase the profile of what we do, I think it’s going to be an incredible move into the PAIS building,” he said. “What we’re doing truly is interdisciplinary so being a part of the new facility is going to be great.”

Right now, the TEM-XRD facility is housed in a 50-year-old building on campus – a space that doesn’t meet the needs of the very advanced and expensive equipment inside. Brearley says PAIS will be able to provide a more controlled environment to be able to produce even better results for researchers.

The new facility will also set TEM-XRD laboratory apart when Brearley goes to seek funding for new instruments. Recently, Brearley says, they’ve been passed over for grants, in part, due to the condition of the current building. He hopes being able to include PAIS in future proposals to NASA and the National Science Foundation will help make a stronger case for why the funding is crucial.

Along with these very tangible reasons, Brearley says having the TEM-XRD facility inside PAIS just makes sense, since these analytical techniques are widely applicable to the research problems being addressed by the many different scientists, researchers and students that will call the new complex home.