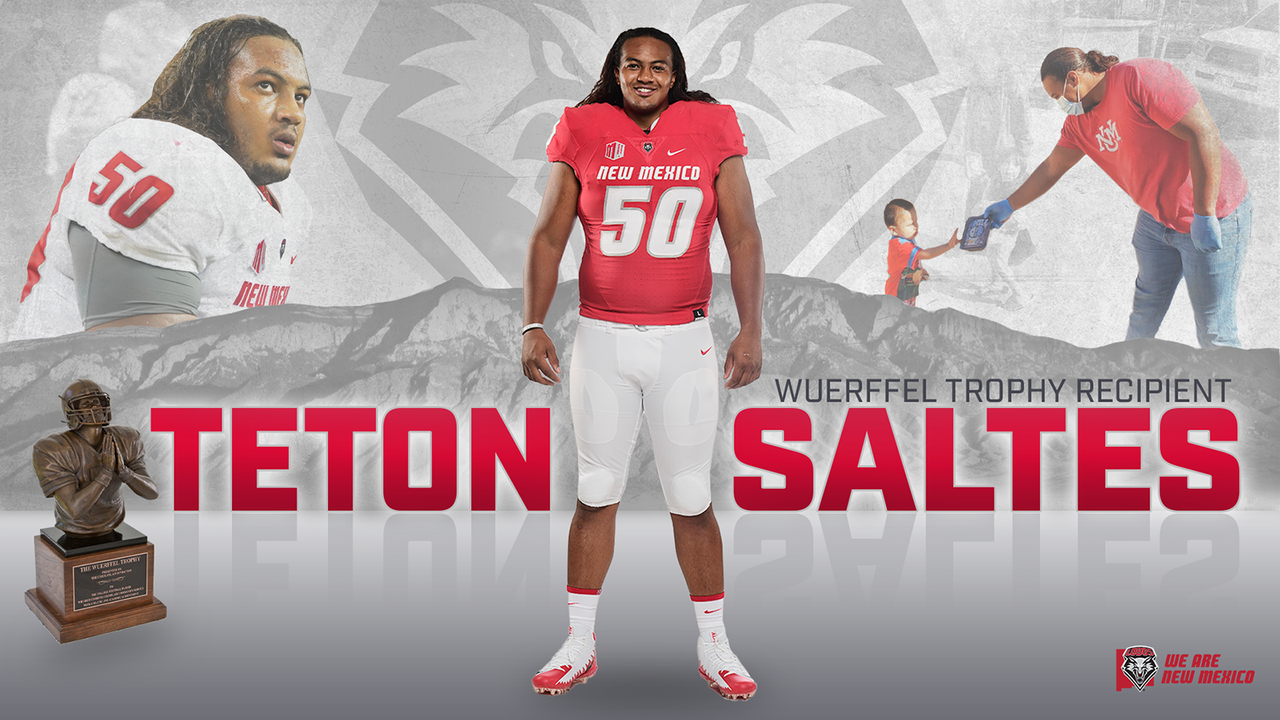 BRISTOL, Conn. - Teton Saltes was named the 2020 winner of the Wuerffel Trophy, becoming the first major award winner in the history of Lobo Football. The honor was announced live on The Home Depot College Football Awards on ESPN. During the show, he was also honored for being named to the 2020 Allstate/AFCA Goodworks Team Captain.

It was a night of several firsts for the award itself, as Saltes became the Wuerffel Trophy's first recipient from the Mountain West and the award was presented on the prestigious awards show itself.

Due to the ongoing COVID-19 pandemic, the awards show was held virtually with Saltes earning the honor from the Tow Diehm Football Complex on UNM’s campus. Also on the show were head coach Danny Gonzales as well as Saltes’ family members in Arizona and on the Pine Ridge Reservation in South Dakota.

The Wuerffel Trophy is awarded to the Football Bowl Subdivision football player who best exhibits exemplary community service and was created in 2005 to inspire greater service in the world. The award exists to honor college football players who excel in Community Service and celebrate their positive impact on society.

Saltes in earning the honor became the ninth winner of a major college football award in Mountain West history, and the second this year, joining Boise State’s Kekaula Kaniho who was selected as the 2020 Senior CLASS Award winner. It marks the first major awards for the Mountain West since Jake Kilpatrick of TCU won the Rimington Trophy in 2010.

"We are thrilled to announce that Teton is this year's recipient of the Wuerffel Trophy and are honored to have him join the family of past recipients," Danny Wuerffel said. "His passion and tenacity in serving others, along with his excellence on the field and in the classroom, truly embodies what the Wuerffel Trophy is all about. Also, I wish we could give out three trophies because our other two finalists are very deserving as well - Shai Werts of Georgia Southern and Sam Ehlinger of Texas. Congratulations to all these amazing student-athletes. It's truly inspiring to see their unwavering commitment to make the world a better place."

"His passion and tenacity in serving others, along with his excellence on the field and in the classroom, truly embodies what the Wuerffel Trophy is all about. "

Saltes, a senior from Valley High School in Albuquerque, graduated with an undergraduate degree in political science and was enrolled in Law School, although he is currently training for a professional opportunity in the NFL. His academic honors include being named three-time Lobo Scholar-Athlete and two-time Mountain West All-Academic.

Saltes was honored over the summer as a Lobo Hero for his work on the front lines of the COVID-19 crisis, working with his native Oglala Lakota tribe to distribute needed supplies to those on his home reservation, which was hit particularly hard.  Saltes also has worked in and is passionate about suicide prevention, about children’s reading, and he has served with the Save The Children Action Network as an advocate for children, speaking in Washington in 2019.  The depths of Saltes’ community service could fill up a web page, and it certainly filled up his nomination form. 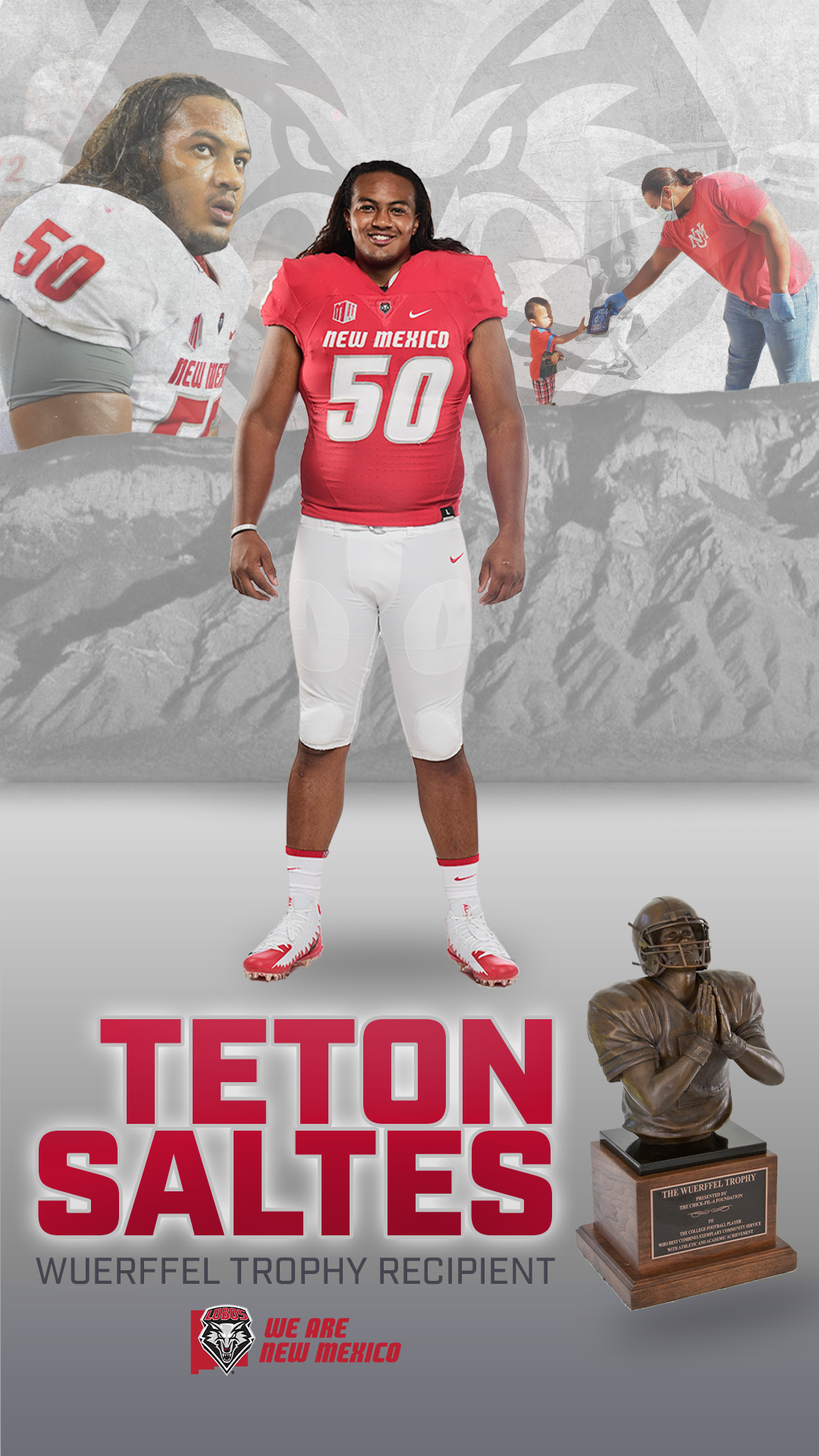 "Teton is a tremendous young man who is very deserving of being named the winner of the Wuerffel Trophy. He is a selfless young man who has dedicated himself to speaking out on behalf of children, suicide prevention, and many other causes. Teton's work in Albuquerque, in South Dakota with his native Oglala Lakota tribe, along with the work he has done advocating for children in Washington is to be commended,” said UNM head coach Danny Gonzales. “Teton is a model student-athlete. Despite post-graduate obligations and performing at a nationally recognized level, Teton during the season was still actively involved in many of the causes that are close to him despite being in the football bubble during this tumultuous season.

“He is a special student-athlete and I'm glad I have been able to coach him and I'm glad he is a great Lobo for life," Gonzales added.

“What a tremendous honor for Teton to be receiving the Wuerffel Trophy," said Director of Athletics Eddie Nuñez. "What he has done by serving others off the field, in his community as well as in New Mexico, through his leadership, his impact and his humility is a true example of being a servant leader. We are so proud of Teton for always representing the Lobos with integrity on and off the field!”

Saltes graduated with a degree in political science and Native American studies, and he will spend his senior season with UNM while enrolled in Law School. After suffering a season-ending injury in 2017, he gave a live sideline interview with ESPN2’s Molly McGrath about his community service work and what he is hoping to accomplish, using football to further several causes.  He stated back then as a freshman that he needed to go to law school because to affect change, you must change law, and that would be the best way to do it.

“What a tremendous honor for Teton to be receiving the Wuerffel Trophy. What he has done by serving others off the field, in his community as well as in New Mexico, through his leadership, his impact and his humility is a true example of being a servant leader. We are so proud of Teton for always representing the Lobos with integrity on and off the field!”

Saltes has also volunteered with Oglala Lakota Schools by speaking with school-aged children on the struggles they face in life on the reservation including bullying and how it affects kids and tools to cope with bullying.

He is actively involved in his community through the BEAR Program (Be Excited About Reading). He also serves as a Peer Mentor and works with youth in the summer, on school breaks and through an online program in improving reading skills. In the BEAR Program, children perform live theatrical skits with props and costumes to address bullying, suicide and home life issues.  He works closely with suicide providers teaching life skills and providing support, having completed ASSIST Training through the program.

Through the BEAR Program, Saltes also helped to conduct winter coat and clothing drives in which he supported and assisted from UNM, and even from Las Vegas when Lobo football moved there for the 2020 season. Teton also helps support the community on the Pine Ridge Indian Reservation by collecting food for the Food Bank, operating out of the community center for families in need.

Saltes has also contributed in New Mexico, serving as the keynote speaker in Santa Fe, speaking about the importance of being involved in your community and completing your education. He serves as a student ambassador for the Save the Children Action Network and in the spring, he was excused from a week of practice to attend lobbying activities in Washington D.C. to promote early education which involved working closely with our U.S. Congressional Reps in developing policy.

He initiated meetings with “Save the Children Action Network” to promote working closely with many of the Native American Communities on the reservations throughout the United States. Saltes has been reviewing potential legislation and initiatives that would fit into the scope of “Save the Children” organization.

“Teton is an exceptional Student Ambassador for Save the Children Action Network (SCAN), always looking for new and better ways to serve his community, particularly children,” said Lacey Daniell-Miller, SCAN state manager for New Mexico. “From organizing book drives for local kids to speaking with lawmakers about the need for more early education funding to drawing attention to the needs of Native American children, Teton has made a significant difference in the lives of countless New Mexicans and brought a new, much-needed perspective on issues affecting New Mexico’s kids. All of us at SCAN are thrilled to see Teton recognized for his work and look forward to all he will continue to undoubtedly accomplish in the future.”

Past Winners of the
Wuerffel Trophy

Saltes is the second Wuerffel Trophy finalist from The University of New Mexico, the first being offensive lineman Garrett Adcock in 2016.

"Teton's entire education at UNM has been geared to change the law for the betterment of a race of people," said UNM Assistant Athletic Director of Communications, Frank Mercogliano. "He is truly changing the world for people."

The formal presentation of the 2020 Wuerffel Trophy will occur with Saltes at a time and place to be determined due to COVID restrictions and will be shown virtually at the 52nd Annual All Sports Association Awards Banquet on Feb. 20, in Niceville, Florida.

The Wuerffel Trophy is presented by Chick-fil-A® and is supported by its corporate partners, Dart Container Corporation/Solo Cup Company and Herff Jones.

The Wuerffel Trophy is a member of the National College Football Awards Association. The NCFAA encompasses the most prestigious awards in college football. Founded in 1997, The NCFAA and its 25 awards now boast more than 800 recipients, dating back to 1935. Visit ncfaa.org to learn more about our story.