The University of New Mexico has been named a Fulbright HSI Leader in the inaugural year of this designation. The U.S. Department of State’s Bureau of Educational and Cultural Affairs (ECA) is recognizing the noteworthy engagement that selected Hispanic-Serving Institutions (HSIs) have achieved with the Fulbright Program. 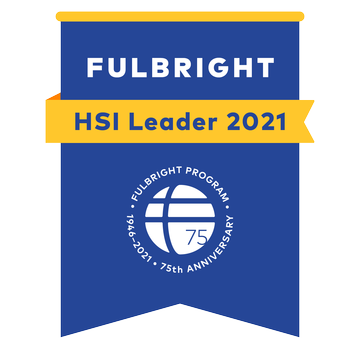 The University of New Mexico is one of 35 HSIs to receive this distinction.

“The University of New Mexico is honored to be recognized as a Fulbright HSI Leader,” said UNM President Garnett S. Stokes. “We are very proud of the Fulbright scholars and researchers we regularly encourage and support at UNM, and our enthusiastic participation in the program has greatly enriched the culture of our university and our community. As a Hispanic Serving Institution, I am particularly pleased we have the opportunity to share our unique New Mexican culture and experiences with universities and communities around the globe.”

The Fulbright program is the U.S. government's flagship international educational exchange program. Fulbright HSI Leader status has been conferred on this group of 35 HSIs, including The University of New Mexico, because they have demonstrated noteworthy engagement with Fulbright exchange participants during the 2019-2021 academic years and have promoted Fulbright Program opportunities on campus. Fulbright HSI Leaders were announced Wednesday, Oct. 27 during an international plenary session at the Hispanic Association of Colleges and Universities (HACU) annual conference.

This initiative is part of the U.S. State Department’s longstanding commitment to build diversity and inclusion within the Fulbright Program and within all the Bureau’s international exchange programs.

“The University of New Mexico has a great track record, producing a number of faculty/student recipients and being named a Top Producer of Fulbright in 2020,” said Kiyoko Simmons, Center for Academic Excellence & Leadership Development director. “It is an honor to be recognized as a Fulbright HSI Leader. This indicates the university’s commitment to international education. The UNM Fulbright program has been supported by dedicated faculty members and the New Mexico Fulbright Association. I look forward to further success of UNM applicants in Fulbright scholar/student programs.”

Since 2000, 74 UNM faculty and 45 students have been selected to participate in the Fulbright Program. Associate Provost Bill Stanley serves as a liaison to the Fulbright Scholar Program for UNM faculty, and Simmons as an advisor for the U.S. student program.

This year marks the 75th anniversary of the Fulbright Program.

The Fulbright Program was created to increase mutual understanding between the people of the United States and the people of other countries.  The primary source of funding for the Fulbright Program is an annual appropriation made by the U.S. Congress to the U.S. Department of State’s Bureau of Educational and Cultural Affairs. Fulbright is active in more than 160 countries worldwide and partners with participating governments, host institutions, corporations, and foundations in foreign countries and in the United States.