Smtih uses oral histories of players, umpires, fans, sportswriters and team officials to resurrect the West Texas-New Mexico League, Longhorn League, Southwestern League and Sophomore League from 1946 to 1961, when the last of them folded. Star players Joe Bauman and Bob Crues get special attention, along with assorted brawls, a fatal beaning incident, home runs and marriages conducted at home plate.

“I’ve been a fan of Toby Smith’s writing for a long time. Toby hasn’t lost his zest for writing, nor the way he crafts his sentences. He’s not ‘Toby Smith,’ he’s more like ‘Word Smith.’ Reading Toby’s story of old-time baseball is delightful, and I found the book hard to put down, consuming it in a matter of hours.”—Gary Herron, author of Duke City Diamonds: Baseball in Albuquerque

Smith is the author or coauthor of nine books, including Little Gray Men: Roswell and the Rise of a Popular Culture (UNM Press). 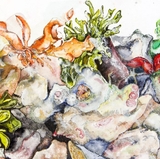