Utilizing an artful combination that relates the interdependence of plants, animals and humans to the interrelationships of art forms through contemporary media, University of New Mexico College of Fine Arts Professor Mary Tsiongas, was selected to display her work, The Mercurial Dog Anticipates Her, in the National Museum of Women in the Arts “Women to Watch” 2015 exhibition in Washington, D.C., a prestigious honor for selected artists.

This year’s theme, “Organic Matters,” is the fourth installment in NMWA’s Women to Watch exhibition series, explores the relationships between women, nature and art. Tsiongas’ piece, The Mercurial Dog Anticipates Her, a framed HD video, is now on display at the museum through Sept. 13.

“Women to Watch” is presented every two to three years and is a dynamic collaboration between the museum and participating outreach committees. Each of the exhibitions features emerging and underrepresented women artists from the states and countries in which the museum has committees.

The 13 worldwide committees participating in “Women to Watch 2015” worked with curators in their respective regions to create shortlists of artists working with the subject of nature. From this list, NMWA curators selected the artists whose work is now on view in “Organic Matters.”

“I am truly honored to be selected to participate in the exhibition Women to Watch 2015, Organic Matters exhibition,” said Tsiongas, the chair in UNM's Department of Art and Art History who is a multi-disciplinary artist whose work often addresses human relationships to technology and the natural environment, and sometimes delves into other longtime fascinations such as metaphysics, games, chance and memory. “My work is being seen by a massively broad audience in a museum that has a remarkable history.”

“I evoke fables and folklore because as children, this is one way we learn about nature; we learn that nature is animated, alive, wise, tricky, powerful, humbling, etcetera.” – UNM College of Fine Arts Professor Mary Tsiongas

Tsiongas’ nomination was forwarded to the museum’s curator in Washington D.C. by the New Mexico Committee of the National Museum of Women in the Arts. Virginia Treanor, the curator for the exhibition, included her video work, The Mercurial Dog Anticipates Her, c. 2013 in an amazing show that brought together inimitably talented artists from this country and other parts of the world including Chile, Italy and France. “It was a great honor to meet them and see their work in the exhibition,” Tsiongas said.

The work, informed by early film history, utilizes a botanical print by Edward Skeats, a little-known artist in the collection of the UNM Art Museum, as an environmental backdrop for the action to happen.

Check out “The Mercurial Dog Anticipates Her” by Mary Tsiongas.
“My vision for ‘The Mercurial Dog Anticipates Her,’ which is part of a body of work called ‘The Likenesses of Light,’ was to present a playful vignette that would evoke the magic of early cinema and the relationship between drawing and video.” Tsiongas said. “The work shows a scenario in the desert that alludes to childhood fables and folklore, but also our deep dependence on water and animals for survival.” 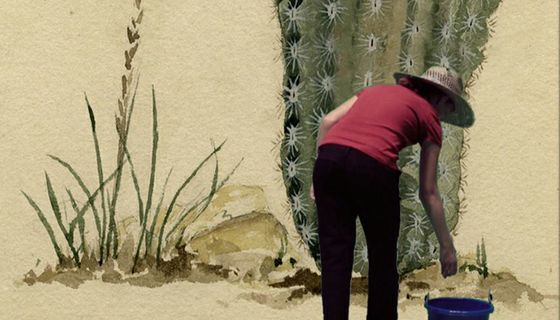 UNM College of Fine Arts Professor Mary Tsiongas, was selected to display her work, The Mercurial Dog Anticipates Her, in the National Museum of Women in the Arts “Women to Watch” 2015 exhibition in Washington, D.C.

Historically, women artists were encouraged by society to take the natural world as their subject. Rather than narrative art, which was thought to require invention and imagination beyond women’s capabilities, subjects such as botanical drawings, still-life paintings and images of animals seemed to require merely the power of observation.

“I evoke fables and folklore because as children, this is one way we learn about nature; we learn that nature is animated, alive, wise, tricky, powerful, humbling, etcetera,” Tsiongas said.

Collectively, the work encompasses modern society’s complex relationship with the environment, ranging from concern for its future to fear of its power. Through a diverse array of mediums, including photography, drawing, sculpture and video, these artists depict fragile ecosystems, otherworldly landscapes and creatures both real and imagined.

The connection between women and nature has a long history, one that is fraught with gendered stereotypes and discriminatory assumptions. The contemporary artists highlighted in Organic Matters build upon and expand these pre-existing conceptualizations by actively investigating the natural world, to fanciful and sometimes frightful effect. 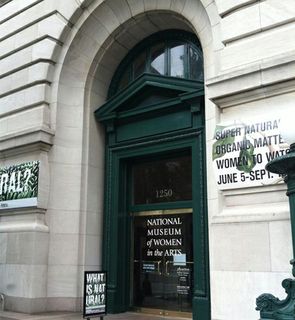 The National Museum of Women in Art in Washington D.C.

In addition to her interest in folklore and metaphysics, Tsiongas also has a background in science. “I am currently reading (and sometimes rereading) Julian Barbour’s book The End of Time,” She said. “It’s a book on the physics of time.  Several years back I became very interested in ‘time’ and how we understand it as humans. It evolved from an interest in trees and their immensely long lives; and in dendrochronology, the study of tree ring dating.

Born in Greece and now based in Albuquerque, Tsiongas has performed, exhibited and lectured extensively for over 20 years; her work has been shown in over 50 solo and group exhibitions nationally and internationally, including venues such as, Nevada Museum of Art in Reno, Nevada, ISEA 2014 in Dubai, UAE, the McColl Center of Art and Innovation, in Charlotte, North Carolina, ARTSPACE, in Sidney, Australia , the San Jose Museum of Art, San Jose, California, and the Lincoln Center in New York City.

Tags: Mary Tsiongas National Museum of Women in the Arts