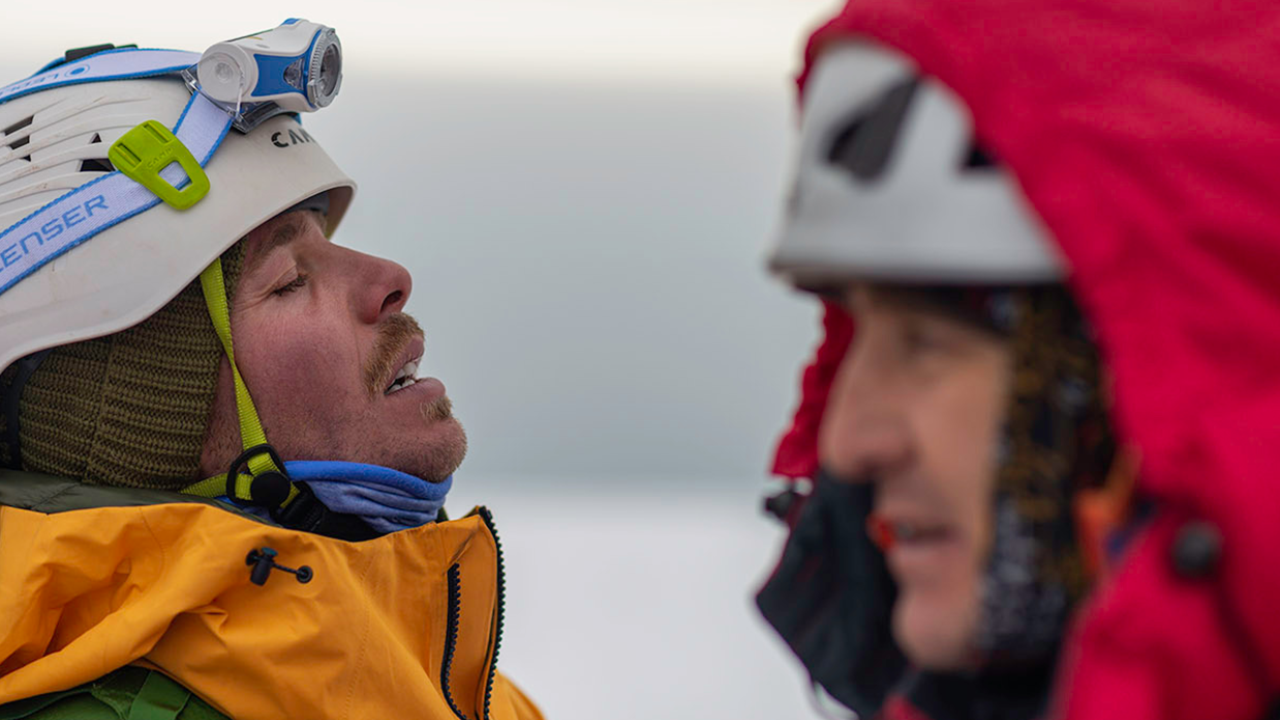 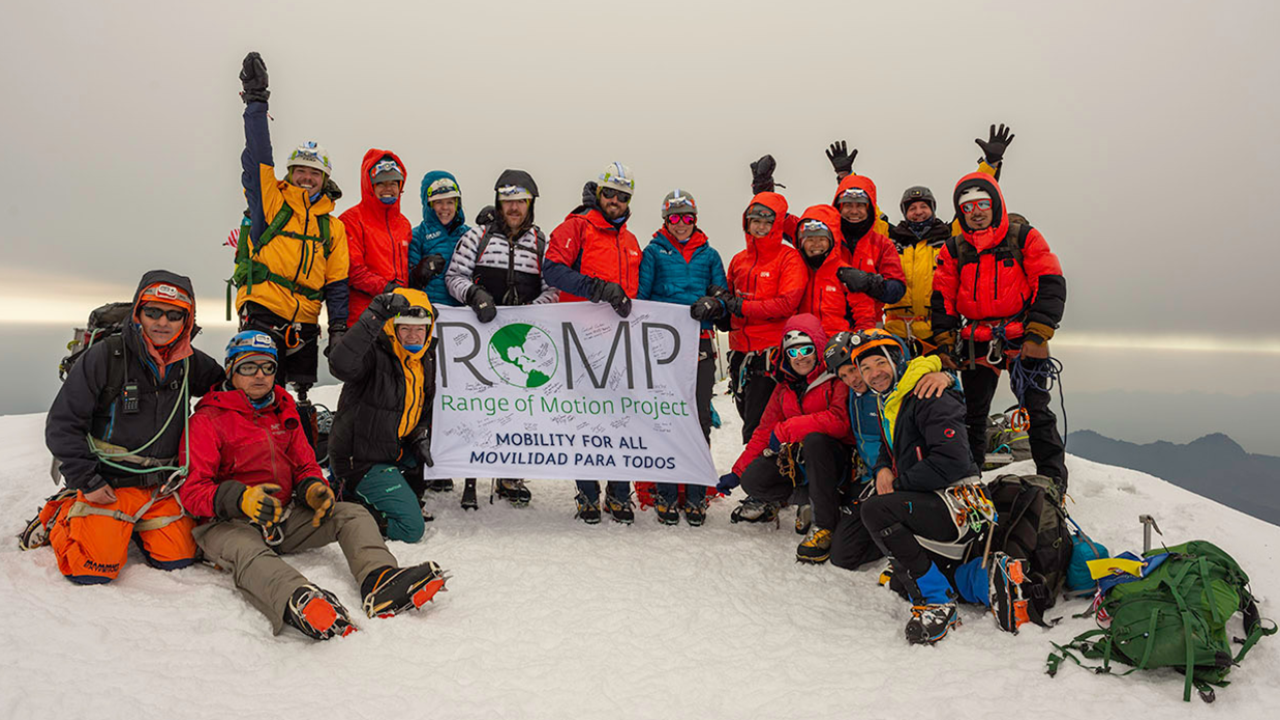 The entire hiking team made it to the summit for the first time. 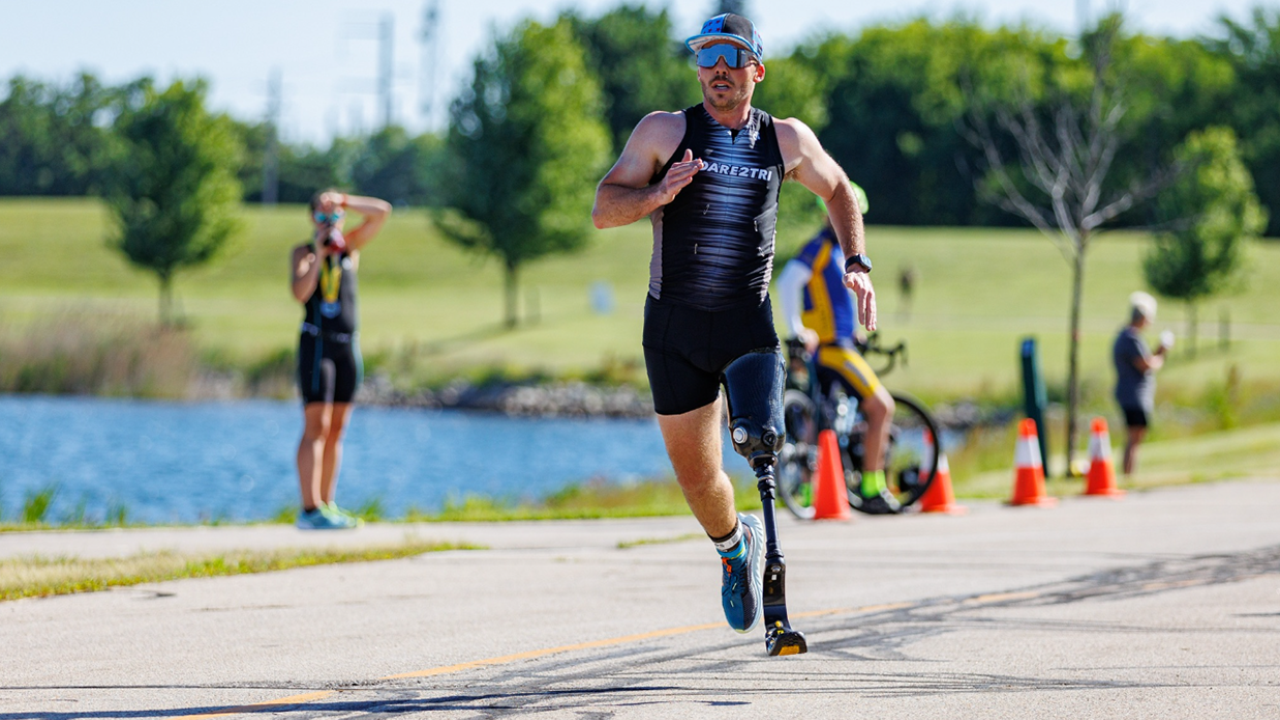 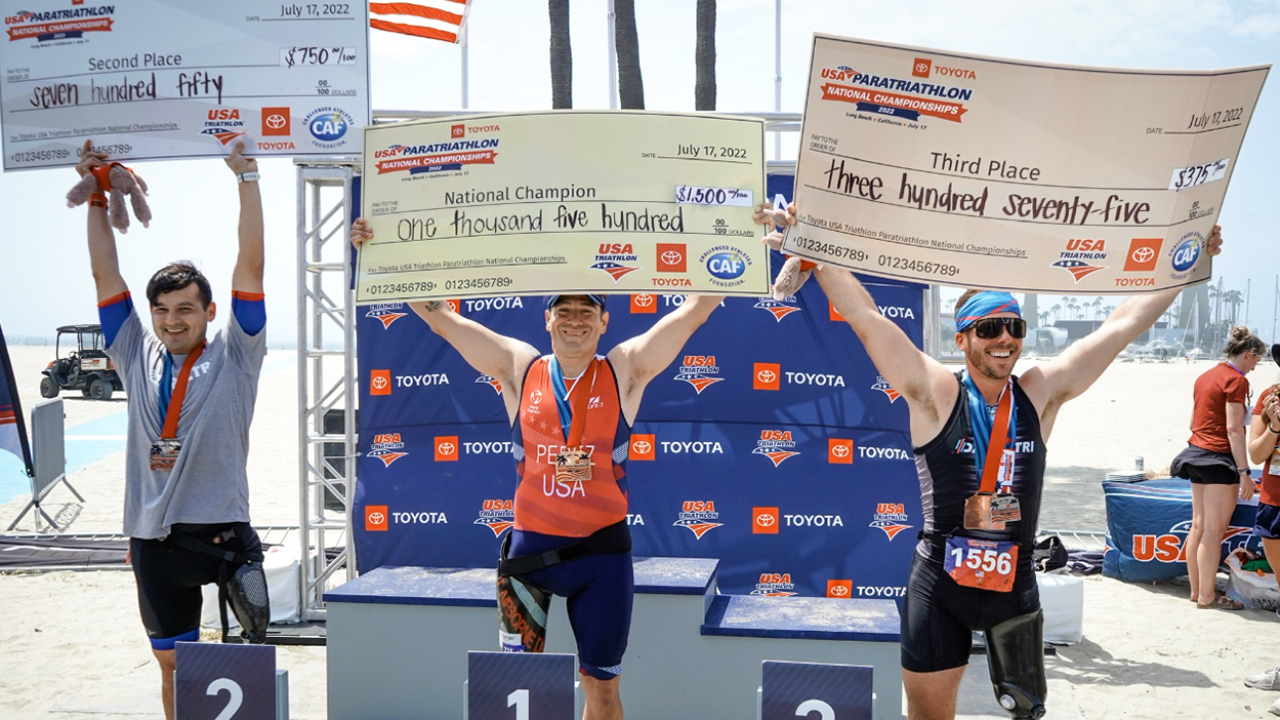 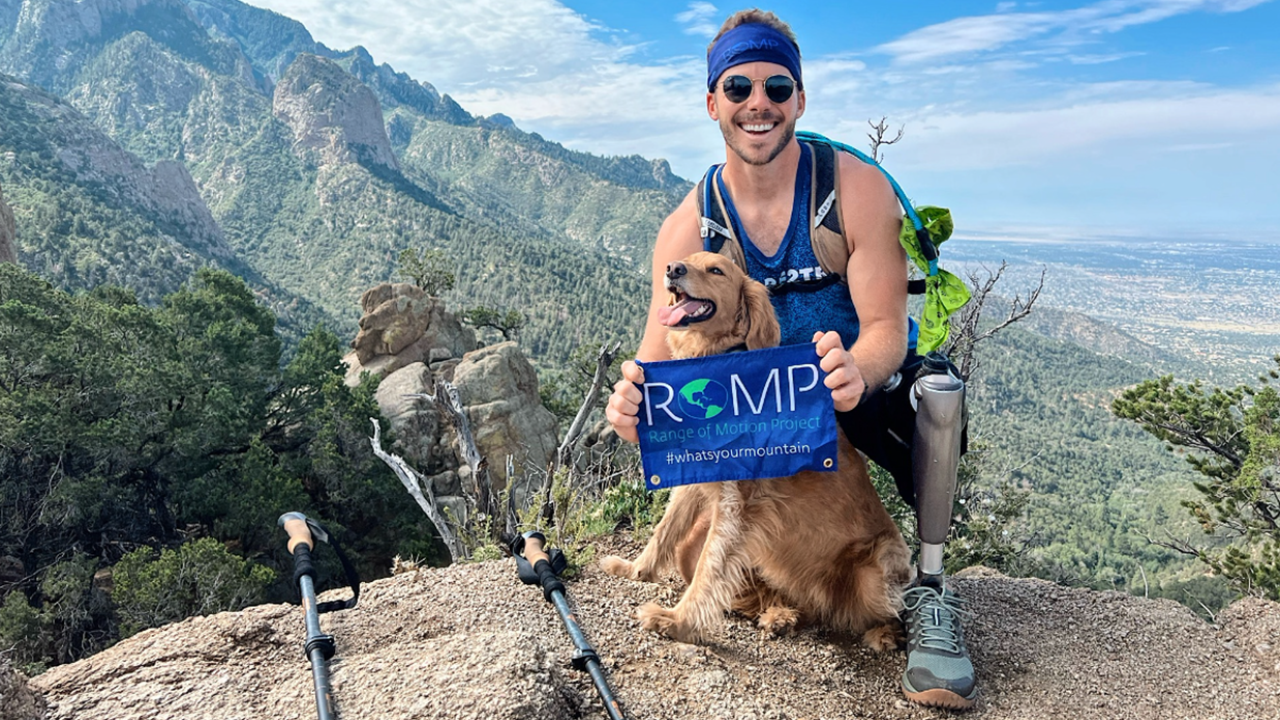 UNM alumnus Kyle Stepp has spent the last two years hiking, running, biking, and skiing around the world on a mission to raise awareness and money for the limb loss and limb difference community. It’s an impressive feat for anyone, but especially for an amputee.

“After you overcome a challenge in life and accomplish goals of yours, you have this overwhelming sensation of joy happiness, and honor,” Stepp said,

Stepp fought against stage four osteosarcoma–a rare bone cancer–at the age of 14. He was given under a quarter of a chance to live, and a choice to either amputate or operate. He chose the latter, receiving a steel implant to function as an internal prosthetic. 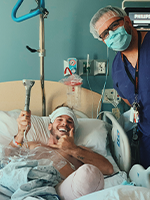 It was not until Oct. 17, 2020 his forewarned complications appeared after a downhill biking accident in Angel Fire. The metal broke, and amputation was inevitable.

“I wish I had enough fingers on my hands to count how many people played a critical role in my survival,” he said. "If it weren’t for their selflessness, love, and support, I wouldn’t be thriving today and summiting mountains."

Some people believe this was the hardest day of Stepp’s life. He says the real difficulty came after the amputation. It was not just learning how to walk and get outdoors again, but how to access what he needed most.

“My first year as an amputee was really hard,” he said. “The biggest challenge was fighting a healthcare system that only wanted to cover my basic and minimum need, and denied me access multiple times to the proper prosthetic equipment and care needed to live my life."

Stepp recalls a "broken" healthcare system, funneled by a lack of understanding, empathy, and clear solutions for his needs while recovering at the height of the pandemic. On top of being denied six times by his insurance, there was a lack of access to the equipment needed to adapt, a lack of representation to show what's possible, and the desire by programs to break barriers and redefine what’s possible for him, and any other recovering amputee.

He emphasized it's not that amputees can't do anything they set their mind to. It's that they don't know it's possible, without proper equipment and encouragement towards their human potential.

He says there is only so much which can be done within the healthcare system without truly understanding what someone else is going through.

“You have to be your biggest advocate. They don't have a perspective or lens to design a system for those who don't look like them.” –Kyle Stepp

Stepp references a sobering statistic from the World Health Organization. That is 9 out of 10 individuals in need can't get proper equipment to help them. Globally, more than 1 billion people need one or more assistive products.

That’s an issue Stepp is working to erase with the Range of Motion Project (ROMP). This mobility group aims to unite the community of amputees to improve those unable to access proper prosthetics and care they deserve.

"When we increase access, representation, education, compassionate care, and equity, we will begin to see that sports and the outdoors are meant for every body," he said.

Since it was founded, ROMP has helped deliver over 4,000 assistive devices to three countries. Advocates have visited over 12,000 patients, all while supporting established clinics in South America.

“The only reason why someone is disabled is because they don’t have the access to a prosthetic or compassionate care,” Stepp said. “The loss of their limb is not what makes them disabled. It is the lack of access to the equipment and care needed to experience the human right of mobility,'" he said.

This non-profit prides itself on a yearly, culminating hike to raise money for prosthetic services.

Just a few months ago, Stepp joined 10 amputees and 10 advocates on this journey to the top of Cotopaxi in Ecuador. With encouragement and high-quality prosthetic equipment, this was the first out of eight years all attendees made it to the challenging summit. 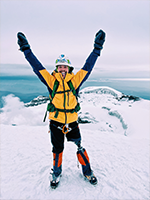 Their efforts added up to $100,000, which will provide over 100 individuals with limb loss access to prosthetic equipment and care. Stepp himself raised $14,000.

“What we did as a team, and what we're working towards is to show the world what's possible when you have equitable access,” he said.

Stepp’s adoration for service is something that started before his accident.

During his time as an undergrad at UNM, he co-founded and built the team that created UNM’s largest student-run philanthropy, Lobothon, a program of Children’s Miracle Network. Today Kyle is a member of their national staff, and works each day to lead and grow partnerships with national and international companies to fundraise millions of dollars annually for local member Children's Hospitals.

“There is an honor when you look into someone's eyes and share a mutual life–an experience of overcoming hardship and pain. There's power behind a shared experience when you are trying to make a difference,” he said.

Service was highlighted as the number one thing that brings Stepp joy. He said giving back to the organizations that saved his life, as well as those that didn’t is an indisputable part of being human.

“I have a love and compassion for this world I would not have had unless I went through that,” he said. 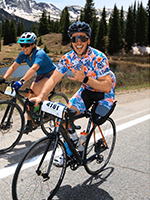 A close second is the outdoors, and staying active–something he calls a north star during his recovery. Stepp believes with the right advocacy, he may soon not be the only New Mexican amputee skiing the mountains of northern New Mexico and cycling throughout the state.

His support from the adaptive community was a lifeline. That kind of positivity and confidence towards amputees from able-bodied people is what he says the answer to ‘how can I help?’ boils down to.

“Don't assume what someone can or cannot do . Rather than asking the question ‘can you still do this,’ ask ‘how can I help you get back to what you love doing?’” –Kyle Stepp

He believes changing the narrative when it comes to amputees is a great starting point.

Stepp has tried to do that so far by showing what’s possible with the proper medical equipment while healing through movement.

He earned 3rd place at the USA Paratriathlon National Championships, and qualified for the international circuit next year. In the next decade, you may even see him on the Paralympic Team for the LA Olympics in 2028.

What else is next for Stepp?

Today, he is working with lawmakers in the 2023 Legislative Session on a critical piece of democracy entitled ‘So New Mexicans Can Move Act.’ Otherwise known as House Bill 131, this bill would mandate that state insurance plans give coverage for prosthetics and orthotics equal to the level which exists in Medicare.

“The only way to access the freedom of movement that these devices bring is to pay thousands of dollars out of pocket or travel out of state for charitable support,” he said.

Stepp said the bill would also require plans to cover a second prosthetic device meant for physical activity–something which would make U.S. history. That first-of-its-kind mandate could help 25,000 New Mexicans afford to live normally after limb loss or difference.

“Physical mobility is a right, not a privilege,” he said.

He believes his representation in an active lifestyle for the the limb loss and difference community is just one piece of the puzzle. Additional initiatives, even something like adding parasports at UNM, will not just bring more opportunities for amputees, but show the able-bodied community anything is achievable with the genuine avenues to do so.

It’s a lot of goals, which may be difficult to see for recent amputees. Stepp said it’s okay to not immediately see the light at the end of the tunnel.

“It’s okay. How you feel sucks. Give yourself the permission to be pissed, but you can't stay in it,” he said. “Even though it's so scary and hard to see beyond your pain you have to pursue a purpose that's bigger than your pain.”

You can support ROMP and learn more about Stepp’s journey, as well as the lives of other amputees on their website. Find out more about the ‘So New Mexicans Can Move’ advocacy and their legislation by clicking here.