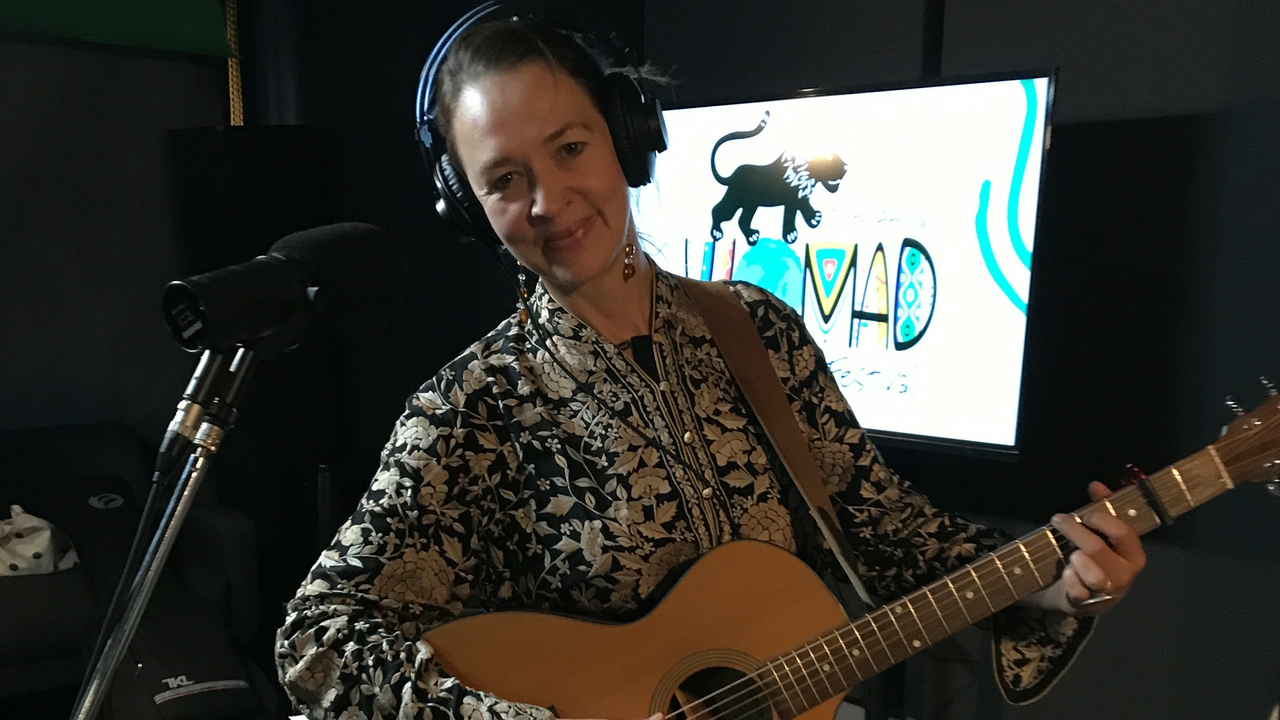 Kristina M. Jacobsen, associate professor of Ethnomusicology and Anthropology (Ethnology) at The University of New Mexico, recently traveled to South Africa on a trip that burnished her credentials as a researcher and artist. While there, Jacobsen attended WOMAD South Africa, where she taught an interactive songwriting workshop and performed and recorded an original with South African musicians. She chronicled her experience in the digital anthropology magazine Sapiens.org. 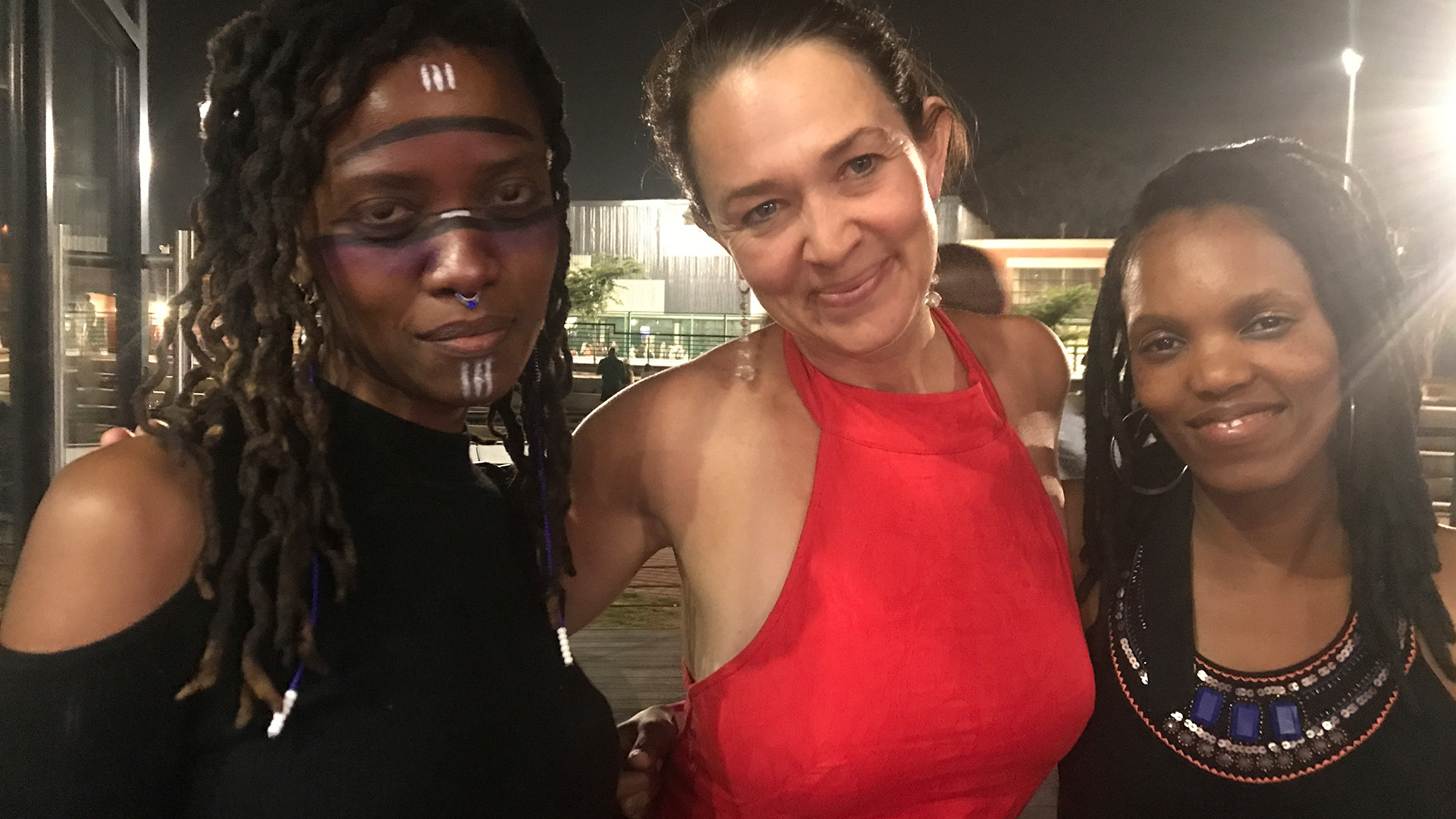 Founded by Peter Gabriel, WOMAD (World of Music, Arts & Dance) has been successfully hosted in over 30 countries and to an audience of millions. Gabriel is an English musician, singer, songwriter, record producer, and activist who rose to fame as a member of the rock band Genesis.

“Travel changes you. You are not the same person when you return,” Jacobsen reflected. “I have the incredible privilege and opportunity to travel halfway around the world, learn about another place through building one-on-one relationships with other artists, and share my own stories and songs on an international stage. I will carry this experience with me in many ways.”

Jacobsen traveled to WOMAD with the Diné-led jazz and funk trio DDAT from New Mexico.

“One evening before the festival, we were invited to Grammy Award-winning sound engineer John Lindemann’s house in Johannesburg for a listening session. We gathered in his modest home recording studio, created to fly under the radar of apartheid authorities, where Lindemann recorded iconic South African vocal groups such as the Mahotella Queens and Ladysmith Black Mambazo before the end of the system of institutionalized racial segregation in 1994,” she recalled.

In the article she related how the group listened to song written and performed by one of DDAT’s collaborators, Alex Rose Holiday. The song “Grandma’s Song” featured Diné language lyrics that spoke of the intergenerational connections between the women in Holiday’s family, starting with her maternal grandmother (másání in Diné).

In the South African listening session, musicians came together in a cross-cultural effort to perform the song. Among the performers was Nelisiwe “Neli” Mtsweni, a Ndebele singer and songwriter from South Africa. In her article, Jacobsen explains how the South African artist and Diné singer share suppression of their native languages and culture and their work to reclaim their heritage languages and identities.

“Grandma’s Song” with isiNdebele and Diné lyrics can be heard via links in the article. Holiday and Mtsweni joined each other to perform onstage. Jacobsen described the experience: “Singing the song publicly in Navajo and isiNdebele, especially as young women singing about their mothers and grandmothers and speaking out against gender-based violence, was not only an act of courage, it was an act of cultural defiance and reclamation. ‘I walk behind my grandmother, in her footsteps,’ Alex’s voice rang out. Neli’s voice reaffirmed, ‘We are who we are because of you.’”

Jacobsen is also taking her experience into the classroom where she teaches a course that focuses on the integration and creative possibilities of bringing the arts into ethnographic method and bringing ethnographic method into the arts. The course is called “Creative Ethnography,” and has students focusing on the craft of writing and performing in a variety of genres–songwriting, poetry, memoir, mural sketching, composition–using ethnography and lived experiences as the metric and inspiration source for these genres of writing, she explained.

Another way Jacobsen will share her experience is in a new craftbook she is writing and co-editing with ethnographic poet and anthropologist, Melisa Cahnmann-Taylor. The Creative Ethnographer’s Notebook: Exercises for Writing, Visualizing, Sounding and Performing Data (Routledge; forthcoming in early 2024), is designed for anthropology classrooms, specifically, to assist instructors in bringing the arts into teaching field methods, ethnography, and social theory “and wanting to make it come alive/take on flesh, for ourselves and for our readers, through the senses and through the arts,” she added.

Next fall, Jacobsen will use her experiences as artist and anthropologist in South Africa in a new community-based song-writing program, The Prison Song Project. She will facilitate a class with UNM students at the Bernalillo County Detention Center where they will share stories and write songs with incarcerated musicians. The class will culminate with a final concert in the jail and another in Keller Hall at UNM.

“My experience in South Africa will stay with me for many years to come. This includes questions of how we, as artists, navigate the legacies of colonialism and apartheid, in places like South Africa, where these histories are so raw and palpable, but also in places like the US, where they are also raw and palpable. I am now eager to bring these experiences into the classroom and in the work I do with students at UNM, including in my community songwriting classes and the program I am building around these classes.”