CBRS is an enterprise-grade wireless broadband network that is economically feasible. It's also available as a service, so businesses can pay a predictable monthly fee. CBRS is used on thousands of Freeway Call Boxes, most notably in California, parks including Central Park in New York, and transportation venues like train and light rail stations.

CBRS is a band (band 48) of radiofrequency spectra from 3.5 GHz to 3.7 GHz for specific users including incumbent users such as the Navy, Priority Access Licensees (private users) and General Authorized Access or unlicensed users. Originally, this band was reserved for use by the U.S Department of Defense, namely for U.S. Navy radar systems.

In 2015, the Federal Communications Commission (FCC) dubbed the 3.5 GHz band as the “innovation band” to be opened up to new mobile users. Since then, the “innovation band” has evolved into what is now known as CBRS. CBRS opens up a major opportunity to unlicensed users and enterprise organizations who want to use 5G, LTE, or even 3GPP spectra to establish their own private mobile networks. 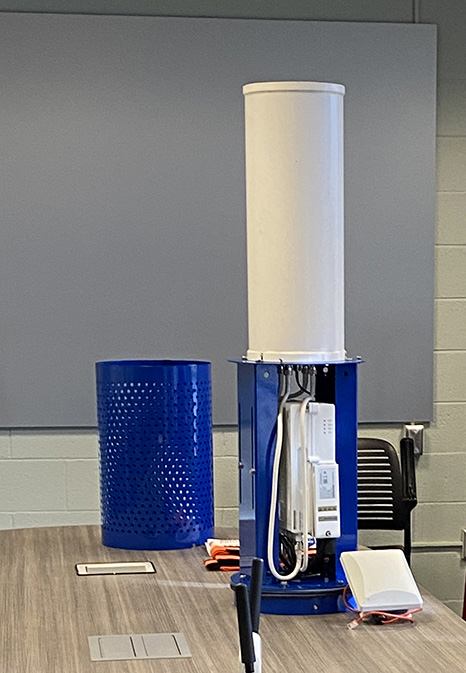 A proof of concept base station used in the trial.

The three fundamental components in deploying an outdoor wireless network with private cellular are AC/DC power, wired backhaul on the enterprise IP network and a physical location to install the radio infrastructure. However, it is often difficult to find all three components / services in one place or the ability to bring these services to a site as needed.

Since late 2020, Wazco LLC has been in the process of developing a “rapid deployment, factory assembled, concealment enclosed 4G LTE Base Station” and was interested in discovering what UNM thought of the concept – and where and how it could be deployed on a college campus.

UNM Associate Director of Information Technology Mark Reynolds, Brian White, director of systems engineering at Celona, and Mike Nasco of Wazco LLC worked on a design to present the project to UNM as a small, proof of concept project to discover innovative ways to implement these three fundamental components on a college or university.

The idea was to install CBRS on various structures around the UNM campus including the Code Blue Emergency Call Boxes. UNM has 140 call boxes around campus, and some were already being fitted with Verizon 5G LTE small cell technology. Reynolds suggested some sites on the UNM campus where the capability of CBRS could be demonstrated. However, there's no need to tear out and replace the existing Wi-Fi networks to integrate CBRS.

A site adjacent to the IT Department building on UNM’s main campus on the streetlight and/or the Code Blue platform was selected. These two options were next to each other and 300-400 feet (line of sight) from the IT data center offices. The “proof of concept” was evaluated via a live demonstration on UNM’s Main Campus in Albuquerque.

A factory-build package of 4G LTE CBRS Base Station Concealment chassis, a transportable Evolved Packet Core (EPC)/SAS and Network Management Server/Switch/Routers was utilized for the demonstration. This transportable network-in-a-box solution was ready for deployment and offered a much less sophisticated demonstration and beta test of the concept than on a Blue Light Emergency Call Box in Orange County.

UNM provided installation support via access to a cherry picker lift platform and a two-man support staff. UNM Staff, having never installed CBRS 4G LTE Base Station, would facilitate the outdoor equipment installation. The indoor installation was accomplished by the Wazco staff. The installation was quick and uneventful.

Both, the indoor and outdoor demonstrations were successful.

“With the CBRS frequency, radio head, backhaul and IP connectivity, we were able to showcase the use of a “private LTE” connection outside and inside a facility,” said Reynolds. “CBRS interfaces like USB adapters were used with laptops to showcase this design and proof of concept.”

Plans for Phase 2 include incorporating a campus streetlight, installed with a Wazco Pole Mounted Base Station and the “Smart City Features” that Labyrinth is making available to cities around the U.S.

The next UNM POC is scheduled for March of 2022 at the same location but with a light pole only and the use of a CCTV camera, an Access point, backhaul and utilizing the CBRS frequencies.

“The upside to a private network is you control the connections, and it is highly secure,” said Reynolds. “The downside is the overhead to maintain and support – so more time and evaluations are required to determine if this has a space in the higher education market. Cities are already implementing CBRS as their technologies so in time health care and educational institutions will follow suit.”