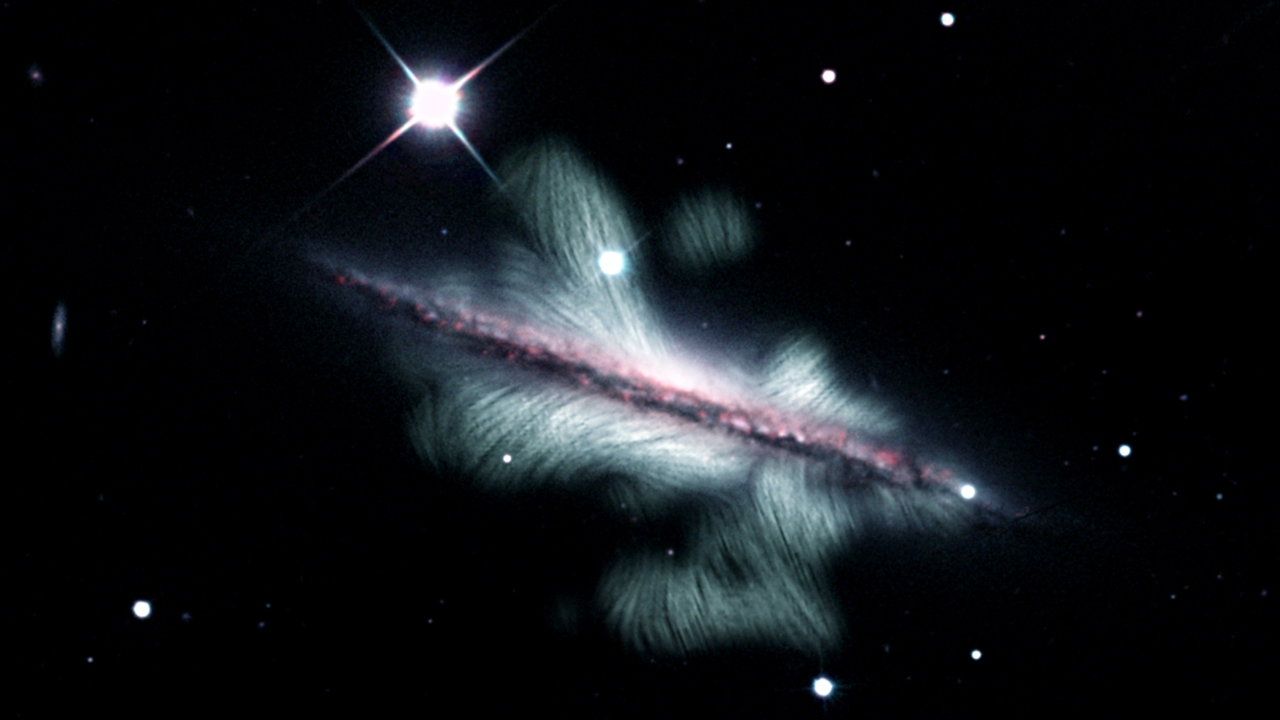 Galaxies not only contain stars, gas, dust, and the mysterious Dark Matter, they are also magnetized. The magnetic fields are many orders of magnitude weaker than the Earth's field or a typical bar magnet, yet scientists can measure them with radio telescopes such as National Science Foundation's Karl G. Jansky Very Large Array (VLA) right here in New Mexico.

A new image released by the National Radio Astronomy Observatory (NRAO) shows the huge extent of a spiral galaxy's magnetic field. The galaxy, NGC 4217, is a star-forming, spiral galaxy, similar to Earth’s own Milky Way, 67 million light-years from Earth in the constellation Ursa Major. The galaxy is seen edge-on in a visible-light image from the Sloan Digital Sky Survey and Kitt Peak National Observatory, and the magnetic field lines, shown in green, are revealed by the VLA.

Most spiral galaxies consist of a flat, rotating disk containing stars, gas and dust, and a central concentration of stars known as the bulge. These are often surrounded by fainter halo of stars, many of which reside in globular clusters. Spiral galaxies are named after their spiral structure that is a feature of the disk.  You can see the spiral structure when the galaxy is viewed face-on, but when viewed edge-on, you see just the disk that it resides in.

University of New Mexico graduate student Tim Braun and Professor Richard Rand from the Department of Physics and Astronomy are members of an international team of approximately 50 scientists who are part of a project called the Continuum HAlos in Nearby Galaxies — an EVLA Survey (CHANG-ES), that is revealing new secrets about these magnetic fields.

Rand provided the optical image of the ionized hydrogen that was first published in 1996.  It is seen in the reddish colors in the disk of the galaxy.  That observation used exposures of more than three hours. The goal was to understand the occurrence and properties of ionized gas halos in edge-on galaxies in order to study vertical flows of gas in galaxies. Here, scientists are using the image mainly to show where star formation is currently occurring in the disk, although the absorption of light by interstellar dust grains in NGC 4271 limits scientists view somewhat.

The magnetic field lines extend as much as 22,500 light-years beyond the galaxy's disk. Scientists know that magnetic fields play an important role in many processes, such as star formation, within galaxies. However, it is not fully understood how such huge magnetic fields are generated and maintained. Magnetic fields are a major component in the interstellar medium (ISM) of spiral, barred, irregular and dwarf galaxies. They contribute significantly to the total pressure which balances the ISM against gravity. They may affect the gas flows in spiral arms, around bars and in galaxy halos

A leading explanation, called the dynamo theory, suggests that magnetic fields are generated by the motion of plasma within the galaxy's disk. Ideas about the cause of the kinds of large vertical extensions seen in this image are more speculative, and astronomers hope that further observations and more analysis will answer some of the outstanding questions.

“We are continuing to analyze the CHANG-ES data for magnetic field configurations in other galaxies,” said Rand. “Deeper observations of some of these galaxies could reveal more widespread magnetic geometries.”

Last November, scientists as part of the CHANG-ES collaboration released an image of the “Whale Galaxy,” which reveals hair-like filaments of the galaxy's magnetic field protruding above and below the galaxy's disk.

IMAGE CREDIT: Composite image by Yelena Stein of the Centre de Données astronomiques de Strasbourg (CDS) with the support of Jayanne English (University of Manitoba). VLA radio data from Yelena Stein and Ralf-Juergen Dettmar (Ruhr University Bochum). The observations are part of the project Continuum HAlos in Nearby Galaxies — an EVLA Survey (CHANG-ES) led by Judith Irwin (Queen’s University, Canada). The optical data are from the Sloan Digital Sky Survey. The ionized hydrogen data (red) are from the 0.9m telescope of the Kitt Peak National Observatory, collected by Richard J. Rand of The University of New Mexico. The software code for tracing the magnetic field lines was adapted by Y. Stein from Linear Integral Convolution code provided by Arpad Miskolczi of Ruhr University Bochum.