It began with 10 teachers receiving just $15,000 per year. Now, dozens of future educators have enrolled in UNM’s College of Education and Human Sciences (COEHS) Albuquerque and District Partner Teacher Residencies (APTR and DPTR) and are earning over double that.

Before this immersive program got a huge boost from the most recent legislative session, it was funded by grants from the National Center for Teacher Residencies and Albuquerque Public Schools (APS).

The APS teacher residency provided a full year of preparation in a K-12 APS classroom, a designated co-teacher, and a guaranteed placement and trial period within APS lasting three years. That brings a whole new level of dedication, to begin with, according to Director of Residencies Marjori Krebs.

“If you made it through the three years because you made that commitment, you end up staying because you found your passion in teaching - if we do our job right,” Krebs said.

While the professional development was unmatched, the salaries were.

“In most professions, you're paid for that time you're working in the field, except for teachers. They’re supposed to quit their job or have no way to support themselves while they’re working full-time in schools as student teachers,” she said.

Slowly but surely, each cohort’s experiences eventually led to the positive retention of 54 ATRP alumni within Albuquerque schools. Despite a few layoffs, this was an overall 77% retention rate over four years.

That caught the eye, Krebs believes, of state leaders.

“I do believe state legislators saw our success and retention rate and heard positive feedback on the strong preparation of residents who were becoming teachers,” she said.

Everything changed, however, in March 2022, when Governor Michelle Lujan Grisham signed House Bill 13.

“The funding from the state is a game-changer,” she said. “The funding allowed us to expand teacher preparation around the state, and provide a substantial stipend for career changers to join the profession.” 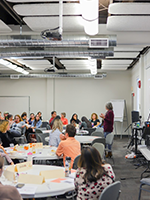 This bill brought the state-level support Krebs had been searching for since its inception.

Teachers completing the residencies could now earn a $35,000 stipend. Not just them, but hosting teachers, principals, and participating higher education institutions participating also were supplemented to make this a reality.

During their final, full-time semester year of student teaching, non-resident student teachers were also now able to receive a $10,450 stipend with no strings attached.

Interest surged not just in New Mexico, but across the country. 10 individuals even came from out of state to take advantage of this opportunity. There are also now eight high-education institutions in New Mexico hosting teacher residents.

“To me that's very indicative of when you support people to be teachers, that breaks down a barrier to bring people into the profession,” Krebs said. “Working for a year without any income is a barrier.”

Stocked with the necessary funding, more participating teachers and institutions, and attention, the APTR was able to turn into DPTR–now up to six area districts and charter schools participating this year.

“The state of New Mexico has stepped up when it comes to financially supporting teacher preparation." – Director of Residencies Marjori Krebs

Teachers now can grow with students in classrooms outside of APS, including Rio Rancho, Los Lunas and Bernalillo Public Schools. There are now 65 total district partner teacher residents spread out across the state.

More districts are expressing interest also, with Aztec Schools requesting 10 residents, half of which specialize in special education.

Filling these positions in special education classrooms, as well as in secondary math and science classrooms is an especially high priority. There is also a critical need for bilingual teachers at all levels.

“Students in these specialized licensure areas need more support and a variety of support,” she said. “We're hoping to really draw attention to that, and bring people into the profession who have a heart for working with kids at all levels.”

The push for applicants overall cannot be overstated. That’s because the role educators fill in New Mexico, and the world overall is instrumental for the future.

“There is no other career that has such long-term effects on individuals,” Krebs said. “The only way to have qualified employees and leaders in the state is to have well-educated citizens. The only way to have well-educated citizens is strong support at home and excellent teachers who help them find their paths. If we want any sort of strong industry we have to have great teachers who prepare those people.”

Krebs is working with the seven other higher-education institutions involved to propose a bill that includes recurring funding for the program. That way, she says, the stipends are guaranteed each year, and the pathway toward APTR and DPTR can flourish.

“With recurring residency funding, we could talk to those students as seniors and say what’s ahead at UNM,” Krebs said. “We can build up a pipeline and support those people through the four years of their program knowing who they are as freshmen rather than receiving notice of the funding in April and having to search for people.”

Learn more about the teacher residency program and its many benefits, as well as how to apply on the COEHS’ website. Applications are due Feb. 15, or until licensure area requests from districts are filled.