University of New Mexico Professor Chris Lippitt was recently named the new associate dean for research in the College of Arts and Sciences (A&S). Prior to this appointment, which took effect Aug. 1, Lippitt was the founding faculty coordinator of the Interdisciplinary Science Cooperative (Co-op), chair of the Co-op’s executive board, and director of the Center for Advancement of Spatial Informatics Research and Education (ASPIRE).

"I am thrilled to have Professor Lippitt join the leadership team at A&S and help us advance every aspect of our research enterprise," said UNM interim dean of the College of Arts and Sciences, Arash Mafi. 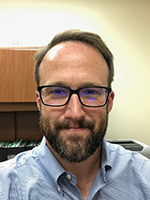 “I could not be prouder or more excited to help support and grow the world-class research and research training taking place within A&S," said Lippitt.

While at UNM, Lippitt has built a strong track record of service, collaboration, and engaging students and colleagues in research. He has been a member of the UNM department of geography and environmental studies since 2012 and believes strongly that the diversity of scholars at UNM and its expertise in providing flagship, R1, training to the emerging American Majority are the keys to UNM’s success as a research leader nationally, and is committed to building on that success through a continued commitment to diversity.

This dedication to research and education also resulted in the launch of the Interdisciplinary Science Cooperative which is located in the new state-of-the-art Physics & Astronomy and Interdisciplinary Science (PAÍS) facility. Lippitt was instrumental in the formation of the Co-op, which is a new campus research collaborative dedicated to facilitating interdisciplinary efforts across campus in support of the University’s research mission. With his guidance, the Co-op is building a culture of collaborative problem solving that stands to significantly impact the state of New Mexico.

Lippitt’s teaching and research focus on remote sensing and geographic information science (GIScience) more broadly, and is funded through the National Science Foundation (NSF) and the United States Department of Transportation (USDOT). As a scholar whose research spans the theoretical to the applied, his research requires routine collaboration with government, private sector, and extra-disciplinary cooperators and accessing a diverse array of federal, state, and private funding sources. He has been contracted/selected by numerous federal agencies to design and test remote sensing-based spatial decision support systems, including the USDOT, NASA, USFS, USFWS, DHS – S&T, ONDCP, USACE, BLM, and the USFWS.

In addition to this research, Lippitt engages in a wide variety of research collaborations, including archeological survey, road quality assessment, post-fire erosion monitoring, improving carbon flux estimates from remote sensing, and monitoring biomass changes from passive optical sensors. He has also started several research-derived companies, helped students launch their own, and advised teams through the NSF iCorps research commercialization program. He has also served as graduate program director supervising the New Mexico Doctoral Program in Geography, a joint program with New Mexico State University. His greatest source of professional satisfaction is in the success of faculty and student mentees.

Lippitt earned his Ph.D. in geography from San Diego State University and University of California Santa Barbara and an M.S. in Geographic Information Science from Clark University.

Lippitt replaces Professor Tom Turner in the department of biology who served the College of Arts and Sciences as associate dean for research for nearly a decade.

“I want to take this opportunity to thank Professor Turner and wish him well as he returns to the faculty,” added Mafi.