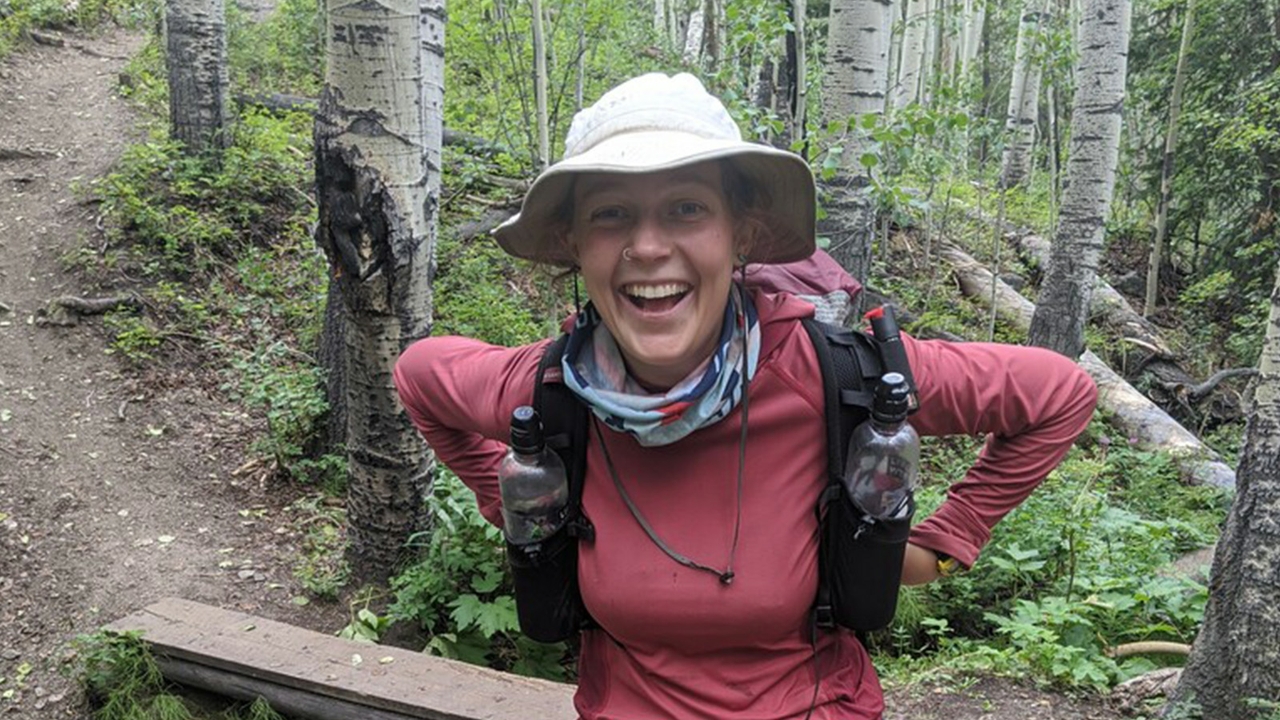 A University of New Mexico graduate student has shattered the fastest known time for a self-supported hike by a female on the 485-mile Colorado Trail. Mikaela Osler is a second-year MFA student studying creative nonfiction in the Department of English Language and Literature.

Hiking with blistered feet and little sleep, Osler averaged 45 miles a day to complete the trek from Denver to Durango on Aug. 9. It took her 10 days, 12 hours and 36 minutes. Russian Olga King held the previous best time of 15 days, 2 hours, and 28 minutes set in 2018.

“I cried a lot and just was so happy it was over,” said Osler, who is working on her master’s degree in creative writing. “I think I was euphoric and so proud of myself.”

“Four days is a massive margin,” Burrell said. “As usual with these multi-day efforts, her trip report describes many hardships to endure, obstacles to overcome, a lot of determination, and then a last-gasp push to the finish.”

From Jericho, Vt., Osler is among an elite group to complete the Triple Crown  ̶ thru-hikes of the 2,650-mile Pacific Crest Trail, 3,100-mile Continental Divide Trail, and 2,190-mile Appalachian Trail.

Rated moderated to strenuous, the Colorado Trail has an elevation gain of more than 80,000 feet with most terrain above 10,000 feet; the highest point is 13,271 feet. The average hike-thru takes four to six weeks. The trail passes through six wilderness areas and goes over eight mountain ranges. Hypothermia, dehydration, and lightning hazards are common problems, and snowfields may be encountered well into mid-summer.

Self-supported hikers like Osler, who is known as FlyBy in the thru-hiking world, can accept support along the way, including caching supplies in advance, purchasing supplies along the way, to finding or begging for food or water. They cannot make plans for assistance from others.

For the last 75 miles on the Colorado Trail, Osler hiked 31 hours straight except for a 30-minute and a 15-minute nap.

“I ran as much as I could, but with six or seven miles to go my quads started to seize and I just had to walk really, really slowly. (I) finally finished a little after 8 p.m.,” said Osler.

A 2013 graduate of the United World College-USA in Montezuma, N.M., Osler was a wilderness leader at the international high school and led wilderness trips while studying at Stanford, where she received her undergraduate degree in comparative studies in race and ethnicity.

Osler was born into a hiking family. Her parents met while hiking the White Mountains in New Hampshire. When her father was in his early 20s, he hiked the Appalachian Trail. Growing up, Osler and her two siblings took hiking and backpacking trips with their parents.