A new collaborative research project led by The University of New Mexico seeks to answer some of the compelling questions surrounding a range of materials, including those for quantum and energy applications.

The three-year project, titled “Data-Science Enabled, Robust and Rapid MeV Ultrafast Electron Diffraction Instrument System to Characterize Materials Including for Quantum and Energy Applications,” began Sept. 1. The $750,000 project is funded through the Department of Energy's Established Program to Stimulate Competitive Research (EPSCoR) State-National Laboratory Partnerships program in the Office of Basic Energy Sciences in the Office of Science. It was one of 31 projects funded in this cycle, and the only EPSCoR project in New Mexico. 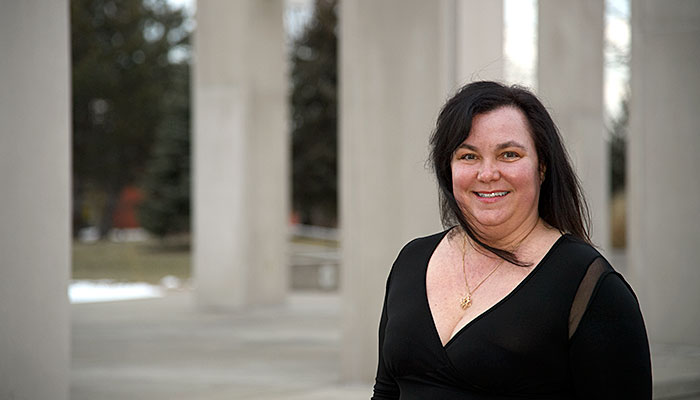 The project is led by Sandra Biedron, a research professor in UNM’s departments of Electrical and Computer Engineering and Mechanical Engineering. Manel Martinez Ramon, the King Felipe VI Endowed Chair and a professor in the Department of Electrical and Computer Engineering, is co-principal investigator. In addition, Biedron and Martinez-Ramon have recently hired a postdoctoral researcher, Mariana Fazio, as well as two graduate students, Destry Monk and David Kirby.

“The ongoing contributions to science and engineering of these instruments are absolutely immeasurable, particularly in physics, biology, or materials science, including semiconductor devices,” Biedron said. “Complementary to the above devices, the Brookhaven ATF MUED system, which was the first of its kind in the world, has already — although still relatively in its adolescent stage — revealed its impactful utility in several fascinating materials science applications, both at Brookhaven and in the systems that followed its lead, such as what my colleague Xijie Wang built at the SLAC National Accelerator Laboratory and now others around the globe are also building, such as in Korea.”

She said that now what is needed is a way to “move the MUED device forward to make it a turn-key, high stability, high-throughput instrument akin to its simpler electron-beam-based analytical tool forefathers requiring less support for operations.”

Many phase transitions in correlated materials are accompanied by symmetry breaking of the electronic structures and the lattice. The physics clues in correlated materials lie in these allusive phase transitions and can only be understood by probing the materials in a state of non-equilibrium. The interaction between electrons and the lattice at ultrashort time scales after excitation with lasers driving such non-equilibrium can reveal the material’s properties, for instance, if the phase transition is either electronic or structural.

“Unlike the low energy electrons used in DC-UED (~50keV) systems, the high-energy electrons in the BNL-MUED system have much longer mean-free-path, thus much less multiple scattering effects,” said Mark Palmer, director of the Accelerator Test Facility at Brookhaven that operates the MUED instrument. “It allows a better signal-background ratio and straightforward interpretation. In particular, it allows the disentangling of separate contributions from the charge and orbital ordering to the diffraction patterns where the intensities of the associated superlattice reflections can be altered significantly by multiple scattering.”

Biedron said that MUED can help us rapidly reveal and understand how we can drive materials into states that exhibit completely new and/or unimagined properties.

“Our project will map the pathway to rapid tune-up of the system and a corresponding high throughput, including data analysis. Our overall goal is to permit more users to explore materials of interest and to deliver analyses revealing the material’s properties,” she said.

The team will be able to take advantage of their ongoing collaboration with their innovative colleagues at the Argonne Leadership Computing Facility (ALCF), a Department of Energy Office of Science high-performance computing user facility. It is here where the MUED system simulations and experimental data will be analyzed using techniques involving optimization and artificial intelligence (AI) and machine learning.

“The convergence of AI and science, enabled through high-performance computing, will continue to have a huge impact on science and engineering,” said Michael E. Papka, director of the ALCF and Argonne’s deputy associate laboratory director for computing, environment and life sciences.

“This project highlights the synergy between materials science research using accelerator- and laser-based analytical instruments with AI tools in a systems approach in order to drive discovery in an easier, smarter, and more efficient fashion. This project affords LANL and UNM access to the MUED system at BNL while working with our Argonne collaborators on the AI, computational, and data analysis aspects,” said John Sarrao, deputy laboratory director for science, technology, and engineering at LANL. “Further, project successes can be extended to other laboratories, as well as national security challenges at LANL through advances in particle and photon beam science, engineering, and technology.”

Biedron and Martinez-Ramon have been applying machine learning to systems, including satellite control, image recognition for the safety of first responders, smart grid, electromagnetic devices, quantum computing architectures, and sub-systems of particle accelerators.

“I’m looking forward to applying our interdisciplinary skills in order to put artificial intelligence to enhance materials research while growing the workforce with the training of our students and postdoctoral researcher,” said Martinez-Ramon.

The research area falls under the Department of Energy, Office of Science’s Basic Energy Sciences Office, specifically the Materials Sciences and Engineering Division and its Program of Electron and Scanning Probe Microscopes.