In her annual State of the University address, University of New Mexico President Garnett S. Stokes addressed the campus community virtually given the continuing COVID-19 pandemic and talked about innovation and the many accomplishments during the past year, once again, in the face of very trying and difficult times.

Stokes, who has served as the university’s 23rd president since 2018, opened by talking about how “innovation is such a powerful tool for improving our society” and how the word innovation describes what the University does whether it’s talking about “advances in science and medicine or developing a more sustainable future for our own institution.”

In opening, Stokes recalled a story she read on linguistic anthropology, which is the “study (of) how living people use language and other things to make meaning in their lives,” and discussed “innovation as a shared language and a powerful tool for improving our society and how the University uses it to describe what it does whether it’s talking about advances in science or medicine, developing a more sustainable future or improving our own institution.

“The past year has been a reflection of the polarized times in which we live,” Stokes said. “But innovation also drives introspection; using our curiosity and passion to improve the world around us by understanding why and how we innovate is the first step in determining how we can help bring people together to translate ideas to action. If innovation is our language, then ideas are our lexicon, and the actions we take are our story.” 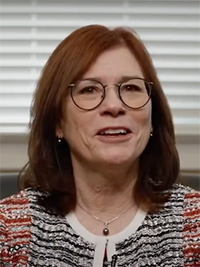 And telling UNM’s story is of utmost importance during these trying times as Stokes highlighted many accomplishments over numerous areas during the course of the past year including:

Stokes also noted the accomplishments of the fabric that comprises UNM – its’ students, faculty and staff.

“Even in the face of a pandemic, the University of New Mexico continued with its tradition of extraordinary research and cutting-edge innovation,” Stokes said. “As the State of New Mexico’s only Research 1 institution, our brainpower, work ethic, and commitment to our community has earned us national recognition from some eminent and diverse organizations.”

“Clearly, it has been a remarkable year, made even more so because so much of what we’ve accomplished happened in the face of challenges presented by the pandemic. As I reflect on all we’ve done this past year, you all have inspired me to be even more optimistic about our future than before.”  – President Garnett S. Stokes

The continuing pandemic and how the Lobo community came together in the face of all the ongoing COVID-related challenges was also highlighted including:

“What makes The University of New Mexico’s story truly great, however, will always be its Lobos,” said Stokes. “With nearly 10,000 faculty and staff, and more than 20,000 students across all our campuses, it’s our students, faculty, and staff who truly define who we are as a university--and your accomplishments over the last year have been beyond inspiring.”

Stokes also cited accomplishments in other areas such as diversity where the most recent QS Top University rankings, which examine how well universities drive diversity while enhancing employability, placed The University of New Mexico at number 74 on its list of more than 350 institutions. UNM also updated LoboWeb to provide greater flexibility in self-identifying demographic information, including gender non-binary designations, affirmed pronouns, Tribal affiliation, disability, or veteran status.

“In recent years, we have found that more residents of New Mexico are choosing UNM,” said Stokes. “Why? Because UNM, with five campuses around the state, provides an exceptional educational experience at an exceptional value. We are also proving to be competitive in terms of scholarship and financial aid packaging, as well as total cost of attendance. Moving forward, I’m confident that we will continue to buck the national trends and see enrollment successes.”

The UNM Foundation has also enjoyed success last year recording 16 gifts in excess of $1 million or more as well as 26,344 donor gifts. In the athletics department, Vice President and Director of Athletics Eddie Nunez was honored with the Mountain West Conference’s prestigious Commissioner’s Award. Nunez is only the third recipient of the award in the conference’s 21-year history.

On the research front, Stokes’ signature Grand Challenges initiative picked up some steam after being hampered by the pandemic. UNM kicked off the Substance Use Disorders Grand Challenge Graduate Student Scholars Program, providing funding and mentoring to graduate student researchers examining health equity and inequity among historically disadvantaged groups, while UNM’s Center on Alcohol, Substance Use and Addiction received a $10 million grant from the National Institutes of Health for the creation of a treatment and recovery center. The Sustainable Water Resources Challenge Team is leading an impressive $15 million, five-year project funded by the National Science Foundation that engages seven universities and their communities across the region to address the impacts of climate change, including drought, wildfires and community well-being.

UNM also completed an updated master plan for Innovate ABQ, a collaborative initiative among UNM, city and county government, and the business community, to create a highly connected community where people can live, work and play addressing an important need in the city.