University of New Mexico Press author Sarah Viren’s debut book, “MINE: Essays”, has been longlisted for PEN America’s 2019 PEN/Diamonstein-Spielvogel Award for the Art of the Essay. 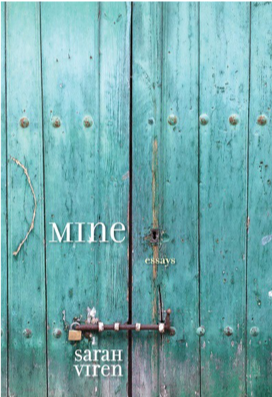 The award honors a published book that exemplifies the dignity and esteem that the essay form imparts to literature. The winning author receives a $10,000 cash prize. Finalists will be announced in Jan. 2019, and the winner will be announced at the 2019 PEN America Literary Awards Ceremony on Feb. 26, 2019, at the NYU Skirball Center in New York City.

The judges for the 2019 award are Garrard Conley, Paul Reyes and Aisha Sabatini Sloan.

“MINE: Essays”is a book about ownership. It begins with an essay about being given a man’s furniture while he’s on trial for murder and follows with essays that question corporeal, familial and intellectual forms of ownership. Mining her own life and those of others, Viren considers the contingencies of ownership alongside the realities of loss.

Listed by Literary Hub as one of its favorite books of 2018, MINE was reviewed by The Iowa Review and by Brevity: A Journal of Concise Literary Nonfiction. An excerpt from the book appeared in the Houston Chronicle and was selected as the winner of the River Teeth Literary Nonfiction Prize.

Viren is a writer, translator and former newspaper reporter. A graduate of the University of Iowa’s Nonfiction Writing Program, she teaches at Arizona State University.