Associate Professor John Carr, of the University of New Mexico’s Department of Geography & Environmental Studies, has been awarded the University of Canterbury’s Visiting Erskine Fellowship for the spring of 2016.

“I am immensely honored and excited to participate in the Erskine program.  New Zealand is a fascinating place in general, and the Christchurch area in particular is going through a host of transformations that offer really essential opportunities for research and collaboration,” said Carr. “In addition to taking on a massive urban redevelopment project in the aftermath of the 2010-2012 earthquakes, Christchurch is at the center of efforts to promote New Zealand’s South Island as a center for sustainable agriculture, ecotourism, and development.  Given my long-standing work on globalization and urban geography, it is hard to imagine a better place to visit to pursue my scholarship and teaching.” 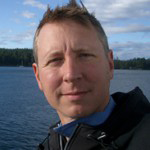 The Erskine Fellowship will provide funding for Carr to travel to Canterbury’s campus in Christchurch to speak and engage in intellectual exchange with students, faculty, and members of their university community. Carr’s Visiting Erskine Fellowship will be held in the Department of Geography, College of Science at the University of Canterbury, and he plans to lecture on globalization and new geographies while there.

Each year, about 70 scholars from around the world are invited to UC to lecture on a variety of subjects. Typically, visiting scholars remain the New Zealand anywhere from one to three months.

Carr began at UNM as a visiting professor in 2008 and has been an associate professor since the summer of 2015. He received the New Teacher of the Year award for the 2012/2013 academic year. He specializes in urban and legal geography, globalization, critical theory, public space and culture, as well as activist research methods.