Timothy Graham, professor of history at The University of New Mexico, has been awarded the 2016 Award for Excellence in Teaching by the Medieval Academy of America Committee on Centers and Regional Associations (CARA).

Graham joined UNM’s History Department in 2002 and is also the director of the Institute for Medieval Studies.

“I am honored that this award recognizes the importance of manuscript studies as a pedagogical field and the leading role we have achieved in this field here at UNM,” said Graham.

The CARA Award for Excellence in Teaching Medieval Studies recognizes exceptional teachers who have contributed to the profession by inspiring undergraduate or graduate students or by creating innovative and influential textbooks or other materials for teaching medieval subjects. All of which Graham has done during his time at UNM. 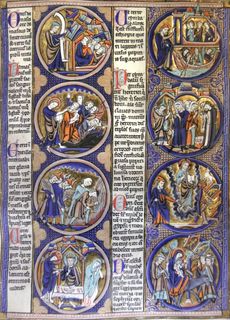 A page from a Bible picture book made in the thirteenth century.

“My colleagues and I have long admired and appreciated how Tim inspires, guides, and challenges his students, especially in the art of paleography,” said Melissa Bokovoy, chair of UNM’s History Department. “He is a truly dedicated teacher who has been recognized several times by the UNM community for his excellence in teaching and research and we are exceptionally fortunate to have him as a colleague.”

In a press release, CARA praised Graham’s ability "to teach both the rigors of manuscript methods, which require meticulous attention to detail, while also [being] able to share a passion for the subject and an abiding interest in the theories of how to think about texts… This award is in recognition of Prof. Graham's reach as a teacher in many different venues and his profound generosity, which has created a 'sense of community' that reaches far beyond his departmental and university setting."

Graham is an internationally recognized expert in medieval manuscript studies and co-authored Introduction to Manuscript Studies, a text that is now the most widely used resource in the field. As director of UNM’s Institute for Medieval Studies, he organizes the University’s acclaimed annual Medieval Spring Lecture Series and runs an intensive, biennial summer workshop called ‘Paleography and Codicology: A Seminar on Medieval Manuscript Studies.’

The four-week summer seminar, which will take place again this year, is open to graduate students from across North America. Graham started it in 2006 as a way to provide training to students who might not have the chance to do similar work at their home institutions. Students from Yale University, City University of New York, the University of Washington, Arizona State University, and the University of Oregon, just to name a few, have traveled to UNM to study under Graham.

“My goal was to make UNM the major center for instruction in manuscript studies in the western U.S.,” he said. 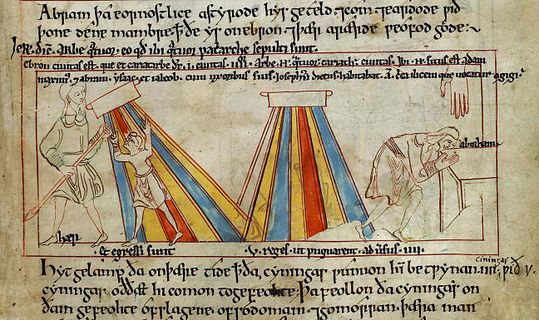 A page from the Anglo-Saxon translation of the first six books of the Bible. This manuscript depicts text and images of Abraham's sacrifice of Isaac and dates back to the first half of the eleventh century.

The seminars have been immensely successful, in part because typically it is difficult to get training in manuscript studies in the United States, according to Graham. He said few faculty have had the chance to work first hand with medieval materials, since doing so would require spending considerable time in a European library. Having been a researcher at the University of Cambridge, Graham had that opportunity.