Understanding the different ways organisms can adapt to environmental temperatures is central to understanding how they will respond to climate change.

In a study released yesterday in Proceedings of the National Academy of Sciences (PNAS), scientists at the University of New Mexico use biophysical models of thermoregulation in order to reveal multiple ways birds and mammals adapt to a wide range of temperatures.

The Scholander-Irving model illustrates how warm-blooded birds and mammals maintain body temperature by balancing the rate of metabolic heat production with the rate of heat lost to the environment.

Body size has been shown to affect both rates and, as a result, influences an organism’s thermal limits – big species are generally able to deal with colder temperatures than smaller species and vice versa. This has been used to explain Bergmann’s rule, the geographic pattern of increasing size with decreasing temperature that is seen in some groups of animals. However, after looking at the distribution of body sizes across temperatures on Earth, the scientists saw that birds and mammals of nearly every size live basically everywhere.

Examples include tiny chickadees that can survive cold Alaskan winters, or elephants that live in some of the hottest parts of Africa. Clearly size isn't everything, the scientists hypothesized. The researchers extended the Scholander-Irving model to understand how species adapt to temperature without changing size.

“We were interested in understanding ways other than body size that species can adapt their physiology and morphology in order to deal with environmental temperatures,” Fristoe said, “So we developed a method of measuring adaptation to the thermal environment independent of body size. We incorporated changes in both the rate of heat production via a species' metabolism as well as thermal conductance - the loss of bodily heat to the environment.” 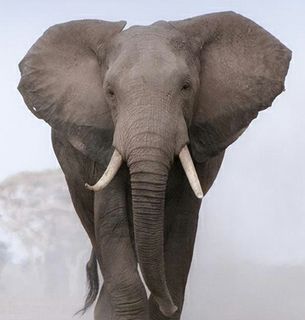 Big ears help elephants, who live in some of the hottest parts of Africa, dissipate heat.

Thermal conductance could be affected by changes in insulation like developing thick fur or changes in body proportion like big ears or long legs that can help to dissipate heat.

The scientists thought that if these types of adaptations are important, then a measure of their mass-independent adaptation should correlate with the temperatures that species experience in the wild.

In order to test this, they collaborated with Imran Khaliq of Ghazi University in Pakistan and Christian Hof of the Senckenberg Biodiversity and Climate Research Centre in Frankfurt, Germany who compiled data on thermal physiology for hundreds of species of birds and mammals.

“Our ideas build on the Scholander-Irving model of heat transfer, which has been around for over 60 years,” said Fristoe, who is the lead author of the study. “However, it has only become recently possible to test these types of questions at such a large scale because of the growing availability of physiological data.”

Fristoe and colleagues found that species combined these traits in a number of ways.

“It was possible to adapt to cold environments, for example, by either increasing  metabolic heat production, decreasing thermal conductance, or both - the interaction between the two is what really mattered,” Fristoe said. “Our study extends on a classic idea in thermal physiology in order to understand adaptations to temperatures across a global scale that goes beyond body size.”

“Unraveling these various avenues of adaptation to thermal environments has important implications for understanding how species respond to past, present and future climate change,” he added.