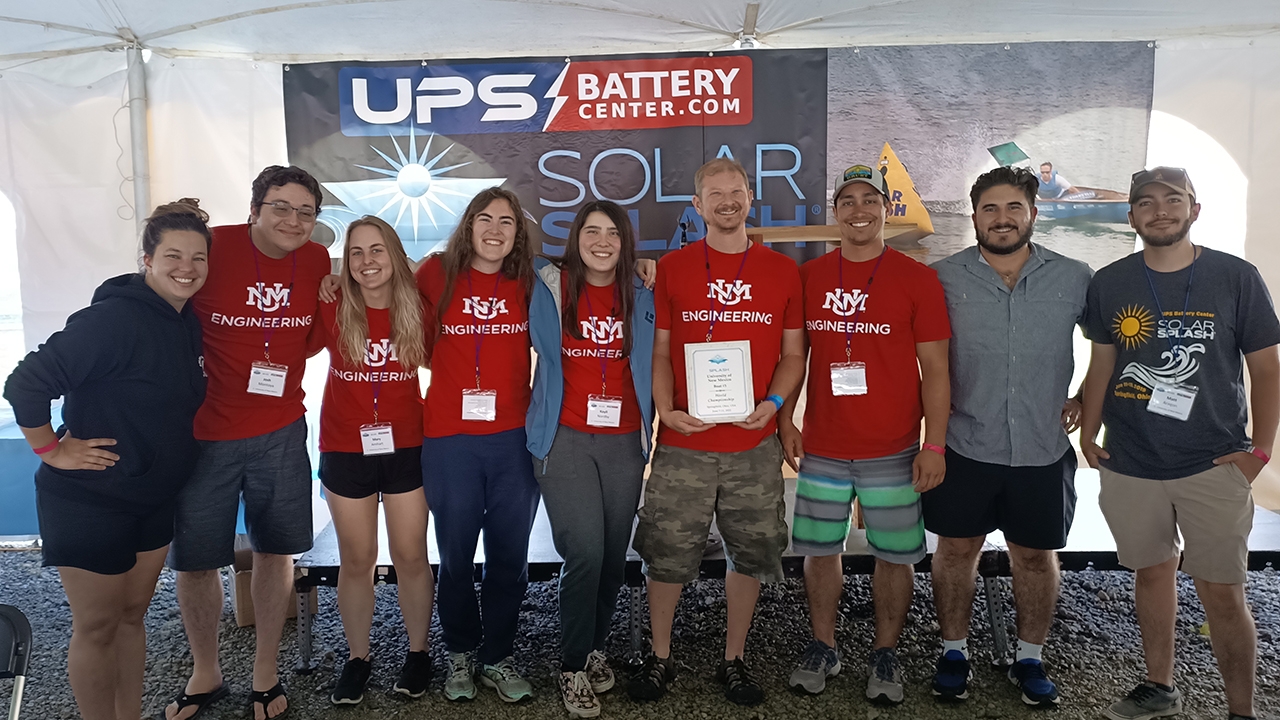 UNM retains its No. 3 position in national Solar Splash competition

For the second year in a row, The University of New Mexico Solar Splash team placed third overall in a contest that pits solar-powered boats from universities around the county against each other in a variety of challenges. The annual UPS Battery Center Solar Splash competition was held June 7-11 in Springfield, Ohio. This is the seventh year in a row that UNM has participated in the contest.

This year’s field was relatively small (eight teams made it to the competition) due to multiple registered teams having to withdraw at the last moment because of pandemic-related challenges (including supply-chain issues). 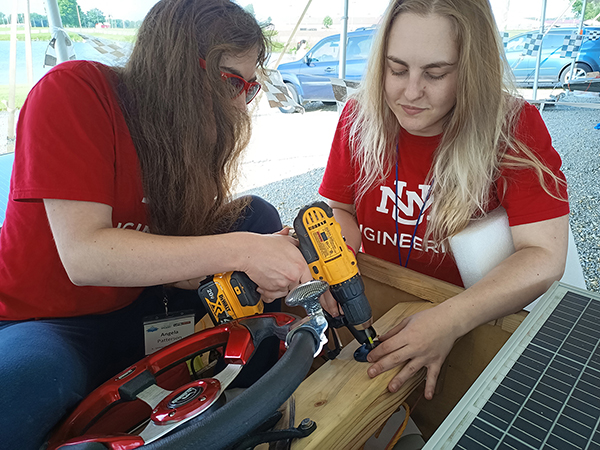 UNM students work on the boat they used in the Solar Splash competition. The team placed third overall for the second year in a row.

Peter Vorobieff, a professor of mechanical engineering, is the team’s faculty advisor. He said that he felt the team did very well, especially considering the supply chain problems.

For instance, this year’s team hoped to have a new carbon fiber hull in place to replace the wooden one to improve speed, but materials ordered in October 2021 arrived just days before the team left for Ohio this month. Instead of replacing the hull, the team did what they could to lighten the boat. This included redesigning the drivetrain, making the boat a few inches shorter and drilling holes into the inside supports to reduce weight.

Also, the team, which usually practices at Cochiti Lake, was not able to get much training time there, due to firefighters using the lake for efforts to combat wildfires burning in the state.

Despite those obstacles, Vorobieff said the team persevered.

“This has been the best result for the UNM Solar Splash team since we began competing in 2016, and for two days, we were actually in the lead,” he said.

This year’s team members who went to the competition are Steve Lindsley, a master’s student in the Department of Mechanical Engineering, Brandon Kirkpatrick, and Felicia Brimigion, who were part of the 2021 Solar Splash team and came back to guide the 2022 team. The new members this year were Mary Arnhart, Angela Patterson, Joshua Montoya, and Joshua Chavez. The Solar Splash program is designed to allow students who participated as seniors to take credit for returning as graduate students and mentors. This maintains continuity, which helps in team performance and in learning.

Sponsors of the UNM Solar Splash this year were UNM, Sandia National Laboratories, IEEE and ExxonMobil. Special recognition goes to Roger Koerner, a UNM alumnus from mechanical engineering, who financially supported the team. His funding made possible the refurbishment of the trailer that allows the team to transport the boat and equipment across the country. Solar Splash is funded almost entirely through donations. Donations to Solar Splash can be made here.